HONG KONG -- As French President Emmanuel Macron touched down in Papeete, the capital of French Polynesia, last weekend for his first official trip to Tahiti, he was met with a traditional warm welcome of flower garlands and dancers.

Unsettled fallout from France's legacy of nuclear testing in the South Pacific, however, has overshadowed his "Tour de France" meant to shore up South Pacific ties with an eye on China. On Tuesday, Tahiti time, Macron concluded his visit with a speech declaring a "debt" to French Polynesia over the tests.

Just ahead of Macron's arrival, several thousand had marched in a "Maohi Lives Matter" rally in Tahiti, organized by a nuclear victims organization and a pro-independence opposition group. Auguste Uebe-Carlson, head of the 193 Association of victims of nuclear tests, told AFP they were "expecting an apology" from the president, who remains head of state.

Before Macron's trip, officials ruled this out.

On the island of Moorea on Tuesday, Macron stopped to talk to protesters and offer assurances of greater transparency, according to AFP. "I can't ask you to trust me when you have been lied to for so long by not being given all the information," Macron told around 50 demonstrators.

"I think that confidence has to be built, by telling all, by sharing everything, by being a lot more transparent, and it's true we haven't done that so far," the president was quoted as saying.

In the speech wrapping up his visit, Macron admitted the testing was "not clean," according to French media reports. "For too long, the state has preferred to keep silent about this past. What I want to break today is this silence," he was quoted as saying, again pledging truth and transparency but not technically apologizing.

From 1966 to 1996, France carried out 193 nuclear tests in French Polynesia. The government has downplayed adverse effects, but journalists and researchers have charted devastating health complications and long-term environmental and social impacts. 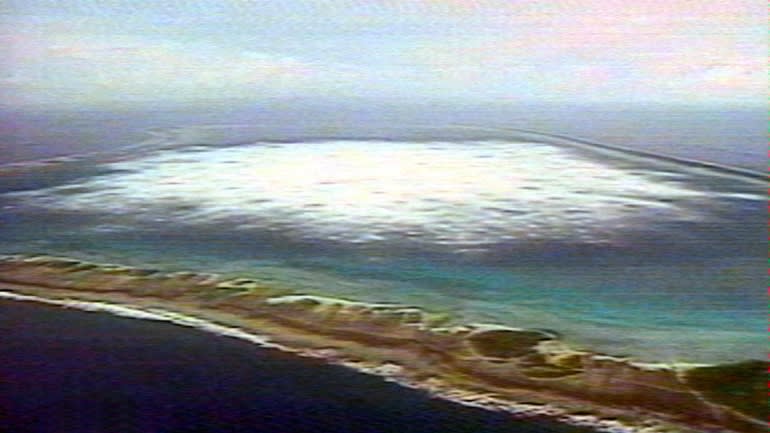 A French military video shows a white shock wave as France detonates a nuclear weapon off an atoll in French Polynesia in 1996.   © Reuters

Alexandre Dayant, a research fellow at the Lowy Institute's Pacific Islands Program, said that for many years the French government "denied its responsibilities."

"If you combine this with the colonial image France has, for many years it wasn't well [perceived] in the Pacific," he said. "But now, things are changing."

Macron's visit was part of an ongoing process of "re-engaging in the region," discussing issues that affect the Pacific including "climate change, rising sea levels and illegal fishing," according to Dayant.

Still, Macron's lack of a formal public apology remained something of an elephant in the room.

In March, the Moruroa Files -- a collaborative project by investigative journalists at Disclose, research collective Interprt, and Princeton University's Science & Global Security program -- examined the consequences of nuclear testing in the region.

French officials have said there was no cover-up of radiation exposure, but the files drew on declassified military documents and showed the impact of the fallout was more extensive than officials had acknowledged. They also showed little was done to protect residents prior to nuclear explosions.

"One reason was to keep a positive image of the testing program among the population in mainland France, and to avoid any negative psychological effects on the Polynesians," Disclose reported.

Sebastien Philippe of Princeton, who worked on the project and co-authored a book on the issue called "Toxique," told Nikkei Asia he was "amazed" by the data.

"In some islands the local population would use rain water as their primary source of drinking water, and after some tests, those rainwater systems would be contaminated," Philippe said. During measurements of toxicity taken over weeks and months, "you would see calculation of exposure and contamination for children, who were not told not to consume the contaminated water. This came as a shock to me."

Previously confidential emails from 2017 showed the French army acknowledged as many as 2,000 of 6,000 military personnel based in French Polynesia involved in past nuclear tests had contracted a form of cancer.

Back in 2010, France established a compensation board for civilian and military victims, but few claimants have received payments. When this was launched, Philippe said the board would refuse 96% to 97% of claims filed.

"In 2017, they changed the criteria for compensation, and now roughly half of the claimants get compensated," he said.

Regarding compensation, AFP reported that Macron told the protesters he was "committed to changing things."

France's reluctance to formally apologize is likely due to the fact that "an official apology will have legal and financial implications," according to Philippe.

"Right now people are compensated under a status of national solidarity, and not under the presumption the state is responsible for their harm," explained the former nuclear weapons systems safety engineer in the French Ministry of Defense.

Dayant said the compensation process can be difficult to navigate and places the burden of proof on those impacted. "It's very difficult for those victims to prove that the reason why they have a cancer today is because of the radiation that they or their parents experienced 30 years ago," he said.

He agreed that an official apology would likely be expensive.

Philippe calculates that paying claimants would cost around 700 million euros ($827 million), which makes it likely individual claimants will be left to go through the court process. He is hopeful that after the data he and his colleagues worked on is peer-reviewed, it will be a tool to assist in this process. "I think and I hope that our work at least can help them in their case."

The trip came as China's growing influence in the region puts traditional allies Australia and New Zealand on edge. "Because of the growing number of geopolitical, security, environmental and trade challenges in this vast region, President Macron has decided to make strengthening our partnerships in the region one of the priorities of our international action," Jean-Yves Le Drian, France's minister for Europe and foreign affairs, wrote in a 2021 paper.

Dayant said he thought the tour would heighten France's diplomatic profile, calling the country "a good player" that is "investing in renewable energy and giving development assistance to countries in the Pacific, and continuing to transfer funding to Pacific territories."

He suggested it likely has "more to do with domestic politics than geopolitics of the Pacific, because Macron is seeking re-election next year."

But while Macron's tour may play well domestically, in the South Pacific, France's recent history is not easily forgotten.

In 1985, before a planned anti-nuclear protest, French undercover agents bombed Greenpeace's Rainbow Warrior ship docked in Auckland, killing a photographer. One former agent described the operation as being "like using boxing gloves to crush a mosquito."

Dayant said scandals like the Rainbow Warrior have had an impact on public perception. Meanwhile, in another wrinkle, the French overseas territory of New Caledonia is headed for its third independence referendum since 2018 in December.

"Macron and his predecessor before him have really been trying hard to change the narrative of France in the Pacific," Dayant said. "I think it will take time.