BANGKOK -- Malaysian Prime Minister Mahathir Mohamad urged Southeast Asian officials and business leaders on Saturday to unite as a region to fight back against protectionist measures that are emerging around the world.

"We are not making full use of our domestic population of 650 million," the 94-year-old prime minister said, characterizing the Association of Southeast Asian Nations as one body rather than 10 countries. "If you want to be listened to, you must be powerful or you must be very rich. Otherwise, nobody listens to you."

The Malaysian leader was speaking at the ASEAN Business and Investment Summit, held on the sidelines of the 2019 ASEAN Summit and East Asia Summit in Bangkok.

Mahathir blamed Western developed nations for promoting free trade when ASEAN provided them with consumers and for resorting to protectionism as the economic bloc became producers of needed goods.

When Mahathir was asked when he thinks the trade war will end, he said five years at the longest. The prime minister said the conflict was initiated by an order of one person, and that person would have two leadership terms at maximum, which would end in five years. He did not name but seemed to be singling out U.S. President Donald Trump. 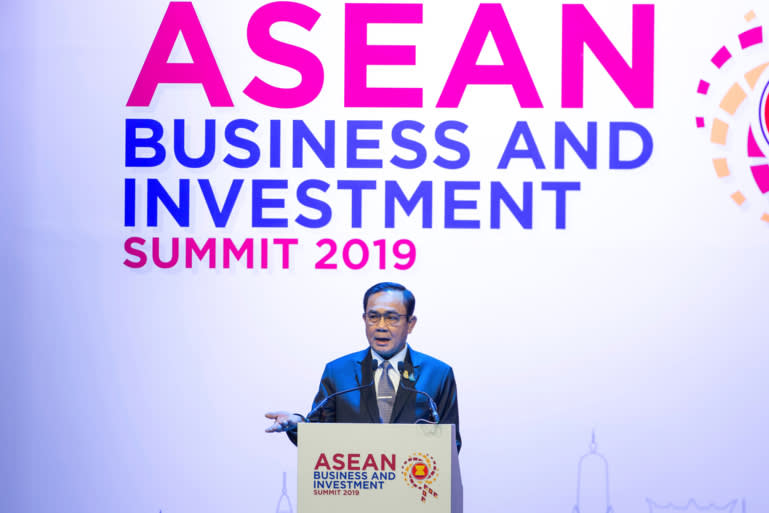 Thai Prime Minister Prayuth Chan-ocha talks about the importance of digital technology and free flows of goods and talent during the opening of the ASEAN Business and Investment Summit in Nonthaburi, Thailand on Nov. 2.   © AP

Thai Prime Minister Prayuth Chan-ocha opened the event by talking about the need to further strengthen the regional economy. He said adopting new digital communication technologies and spending more on infrastructure will be vital. He also preached the importance of allowing seamless flows of goods and talent across the region.

AirAsia Group CEO Tony Fernandes reinforced Prayuth during his keynote speech at the business summit. "There is no real ASEAN e-commerce champion," the airline group's CEO said. "One of the reasons is custom clearance. We don't have a single custom clearance window in ASEAN."