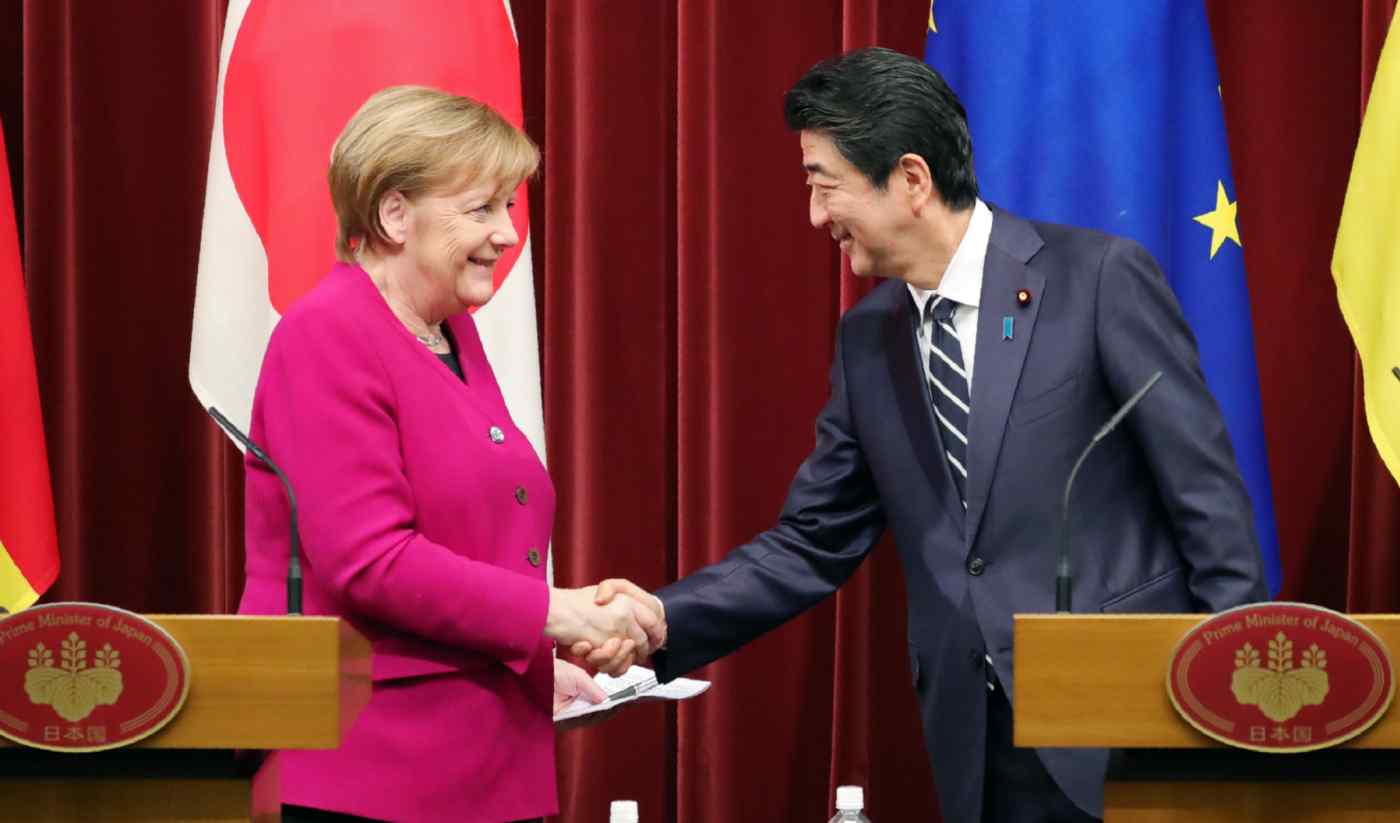 TOKYO -- German Chancellor Angela Merkel visited Japan Monday for the first time in three years as Berlin looks to dial back a diplomatic and economic strategy heavily focused on China and strengthen ties with a like-minded free-trade advocate.

"I am very happy that you traveled all the way here, just for Japan," Japanese Prime Minister Shinzo Abe said at the beginning of their meeting. The chancellor, who has visited China 11 times since 2005 but Japan only five times, will head straight back to Germany on Tuesday without stopping in other Asian countries.

The new diplomatic charm offensive comes as German industry reassesses its position toward China. While approximately 5,200 German companies operate in China, employing more than 1 million workers, the U.S. administration's pressure on China over forced technology transfer and state subsidies has triggered a review in Germany as well.

In January, the Federation of German Industries (BDI) issued a policy paper outlining 54 demands to Berlin and Brussels, headquarters of the European Union, to "better meet the growing challenges posed by the state-dominated Chinese economy."

Merkel said at a joint news conference with Abe after their meeting that the EU-Japan deal will send an "important signal to the world," a likely reference to a growing trend elsewhere toward protectionism. A worker is seen at BMW Brilliance Automotive's plant in Dadong, Shenyang Province, China. Some 5,200 German companies, including BMW, operate in China, employing over one million people. (Photo courtesy of BMW)

Until now, Berlin has explained that Merkel did not need to visit Tokyo as much due to the stable relations between the countries, with no problems requiring top-level diplomacy to solve. But China's growing presence in the global economy undeniably played a part in Germany's tilt toward Beijing.

"While Germany's economic relationship with China continues to be very strong, German industry is reassessing its position toward China," said Janka Oertel, a transatlantic fellow at the German Marshall Fund of the United States.

Germany sees cracks forming in the global free-trade system that has supported its development as an exporting powerhouse since World War II and seems to be turning to fellow manufacturing giant Japan as a counterweight. "Cooperation with Japan is increasingly relevant as the multilateral trading order is under significant strain," she told the Nikkei Asian Review.

Under President Donald Trump, the U.S. -- traditionally Europe's most important partner -- has imposed tariffs on steel and aluminum not just from China but also from the EU. Trump's transactional approach does not mesh well with the EU's emphasis on adhering to a rules-based order.

"In 2005, the U.S. urged China to be a 'responsible stakeholder' in the international system that the U.S. and the U.K. helped create -- in part to prevent Germany and Japan from re-emerging as global threats after World War II," said Isaac Stone Fish, a senior fellow at the Asia Society's Center on U.S.-China Relations.

"But now, as the U.K. is reeling from the chaos surrounding Brexit and the U.S. is redefining its role in the world under Trump, it is Germany and Japan that are working to maintain the global system. Germany does seem to be looking to Japan as a useful partner in protecting free trade and a rules-based economy."

Meanwhile, Berlin has found itself in an awkward position regarding Beijing, demanding action on human rights issues even as the two countries strengthen their economic ties. German companies being forced to transfer technology to Chinese partners are losing patience, while the German government is growing more suspicious of Chinese acquisitions of German businesses as well as possible spying by Chinese authorities.

The BDI policy paper stated, "For a long time, it looked as if China would gradually move toward the liberal, open-market economies of the West by integrating into the world economy and reshaping its economic system. This theory of convergence is no longer tenable."

China, the paper said, "is no longer developing structurally in the direction of a market economy and liberalism but is in the process of consolidating its own political, economic and social model."

In addition to trade, Merkel and Abe discussed partnering on advanced technology. Remaining competitive in the coming technological landscape requires collecting and harnessing vast amounts of data to improve the accuracy of artificial intelligence. Both Germany and Japan lag well behind the U.S. and China in this area and are scrambling to catch up.

Merkel said at the meeting that Berlin would back Abe's proposed initiative to develop a global framework to enable the free flow of data. This stands in contrast to China's efforts to contain data within its borders.

Germany also sees its relationship with Japan -- with which it shares such values as multilateralism, a market economy and free trade -- as essential for pursuing reform at the World Trade Organization. Merkel expressed hope for progress on this front at the summit, noting that both nations are leading proponents of a rules-based international order.

Despite the shift in dynamics, the U.S. and China remain as important to Tokyo and Berlin as ever. Heading off the Trump administration's threatened tariffs on autos, a pillar of the German and Japanese economies, is a top priority for both. And while Berlin is working to rebalance its foreign policy, "it is still unlikely for leaders like Merkel to emphasize Japan over China," Stone Fish said. The goal is not to antagonize the U.S. and China, but to get them to take notice by forming a united front, analysts said.