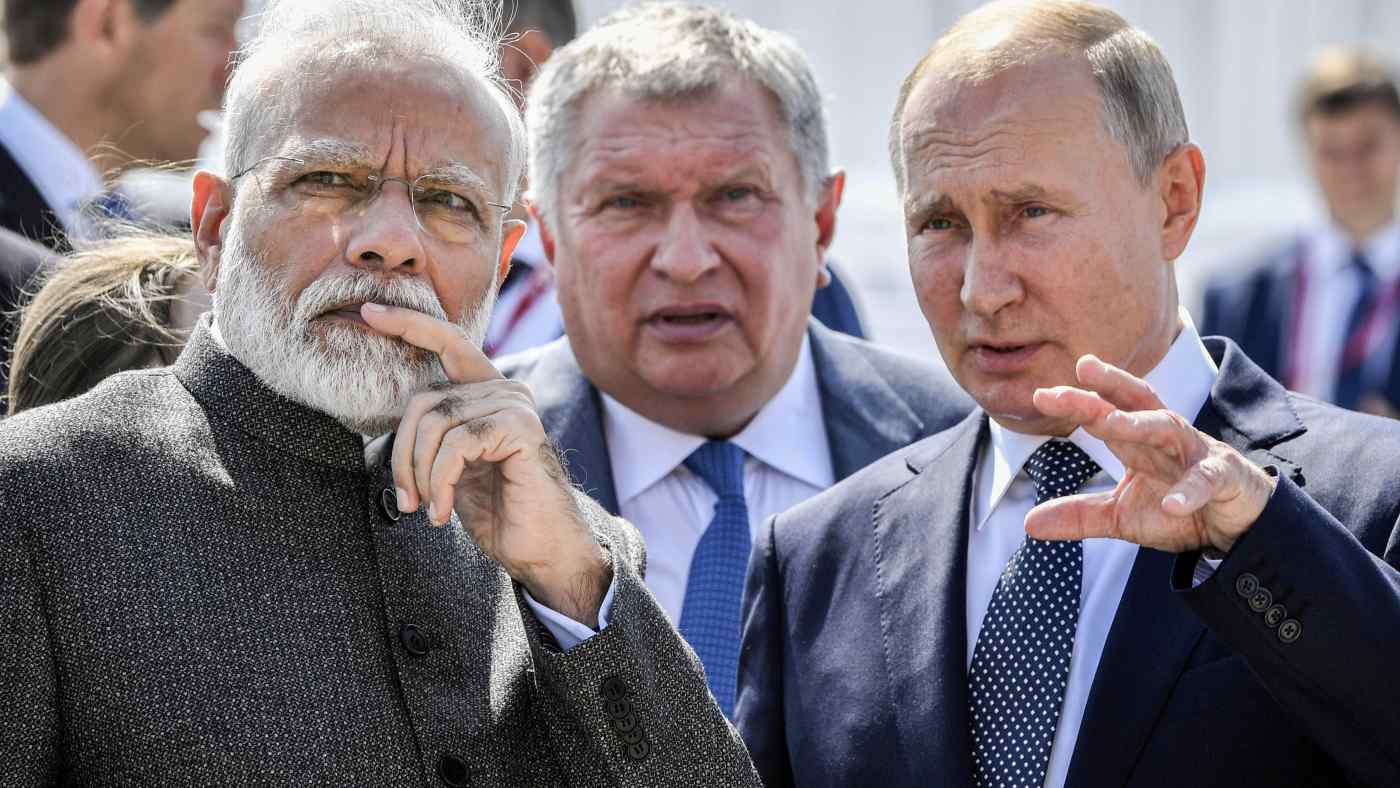 NEW DELHI -- India and Russia reaffirmed an ambitious pledge to nearly triple trade to $30 billion by 2025, during the annual summit Wednesday between Prime Minister Narendra Modi and President Vladimir Putin.

Wednesday's summit, the 20th between the two countries, took place in the Russian Far East city of Vladivostok alongside the Eastern Economic Forum.

The two sides achieved a "major breakthrough" in the energy sector, Gokhale said, and agreed on a road map for cooperation over the next five years "in which they will concretely work on investments both ways."

India, which imports about 80% of its energy, also looks to source liquefied natural gas from Russia.

"Energy is going to be the major pillar of the relationship," the foreign secretary said.

Modi and Putin also discussed sending workers to Russia, which faces a labor shortage. Cooperation in the pharmaceutical and agriculture sectors and conducting trade in local currencies were among other prominent topics during the meeting.

"[Bilateral trade] is currently $11 billion, but both leaders felt this is far below the potential," Gokhale said. "We are setting a target of $30 billion by 2025, and it will be our effort to ensure that the target is achieved."

The $30 billion target was cited recently at a meeting between Russian and Indian officials Aug. 11-13 in Vladivostok.

The two sides reached 14 memorandums of understanding, including one to develop maritime communications between the southern Indian city of Chennai and Vladivostok. This agreement "ensures there will be connectivity between two major ports, which will give impetus to cooperation between India and the Russian Far East," Gokhale said.

Another pact involves the defense sector, covering production of spare parts for the Russian-origin military equipment in India.

"It will be coproduction in India in an intergovernmental format," Gokhale said, noting that this would transform the defense relationship from buyer and seller to joint manufacturing.

After the summit, Modi also said joint production of spare parts in the "strategic area like defense" will support the industry.

Putin said Russia and India have close cooperation in the military-technical realm. Moscow prioritizes trade and investment cooperation with New Delhi, he said, calling his country "a reliable supplier" of energy resources to India.

Global and regional issues including Afghanistan and Kashmir also were discussed. Modi said India wants to see a safe, peaceful and democratic Afghanistan. The prime minister also outlined to Putin the situation in the Indian-administered Kashmir region, whose special status was revoked by his government last month.

Modi thanked the Russian president for his "very clear, strong" support for India on the Kashmir issue, Gokhale said.