Connectivity with Cambodia, Laos, Vietnam seen as response to China's Belt and Road 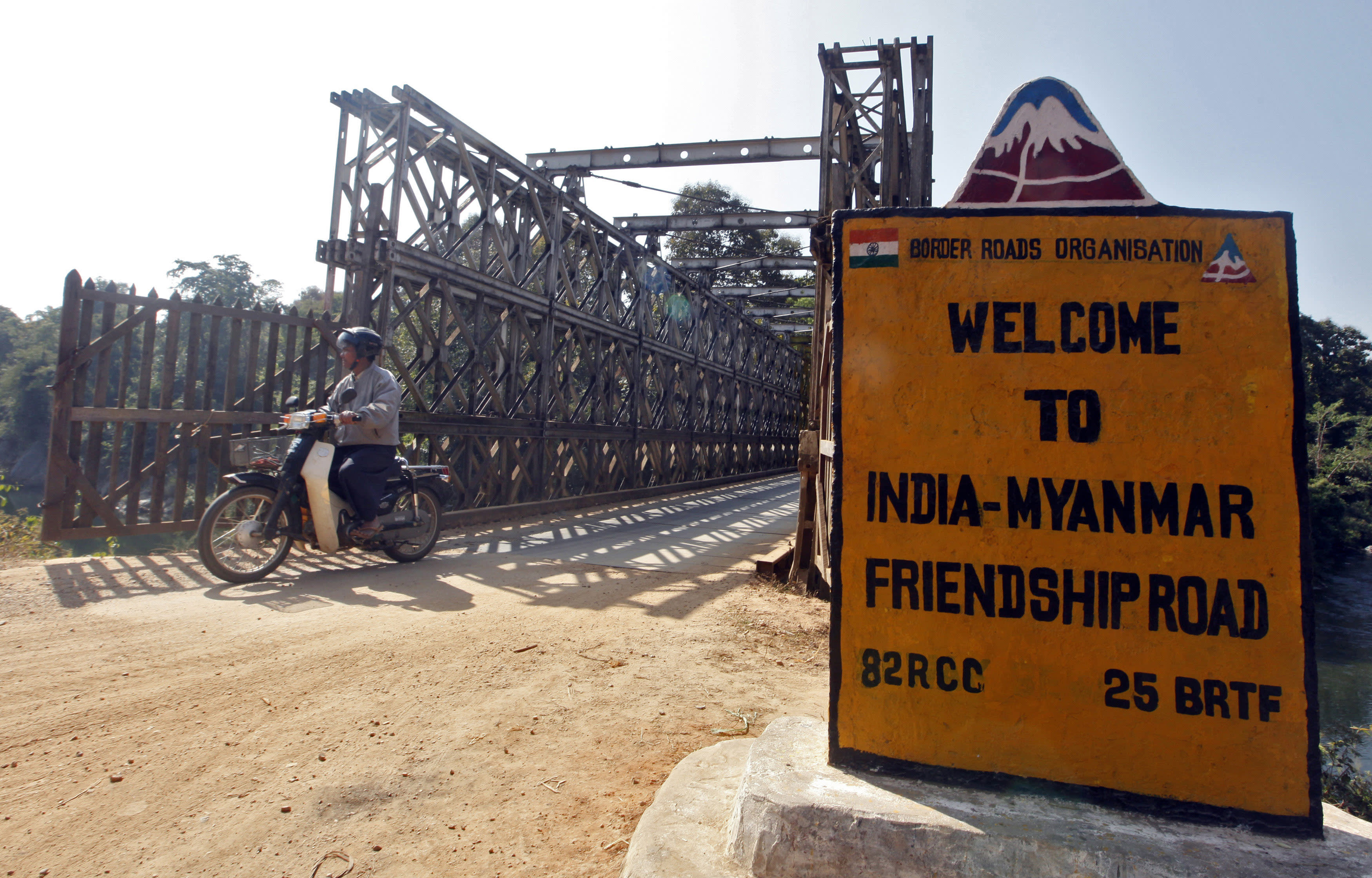 The border crossing between northeastern India and Myanmar is being opened up at Moreh as part of a trilateral highway project to connect India with ASEAN. REUTERS/Rupak De Chowdhuri   © Reuters
KIRAN SHARMA, Nikkei staff writerDecember 29, 2017 18:02 JST | China
CopyCopied

NEW DELHI -- India is pushing an ambitious highway initiative through Myanmar and Thailand to connect with Vietnam through Cambodia and Laos, which observers of Southeast Asia see as part of its efforts to counter China's Belt and Road Intiative (BRI) project. 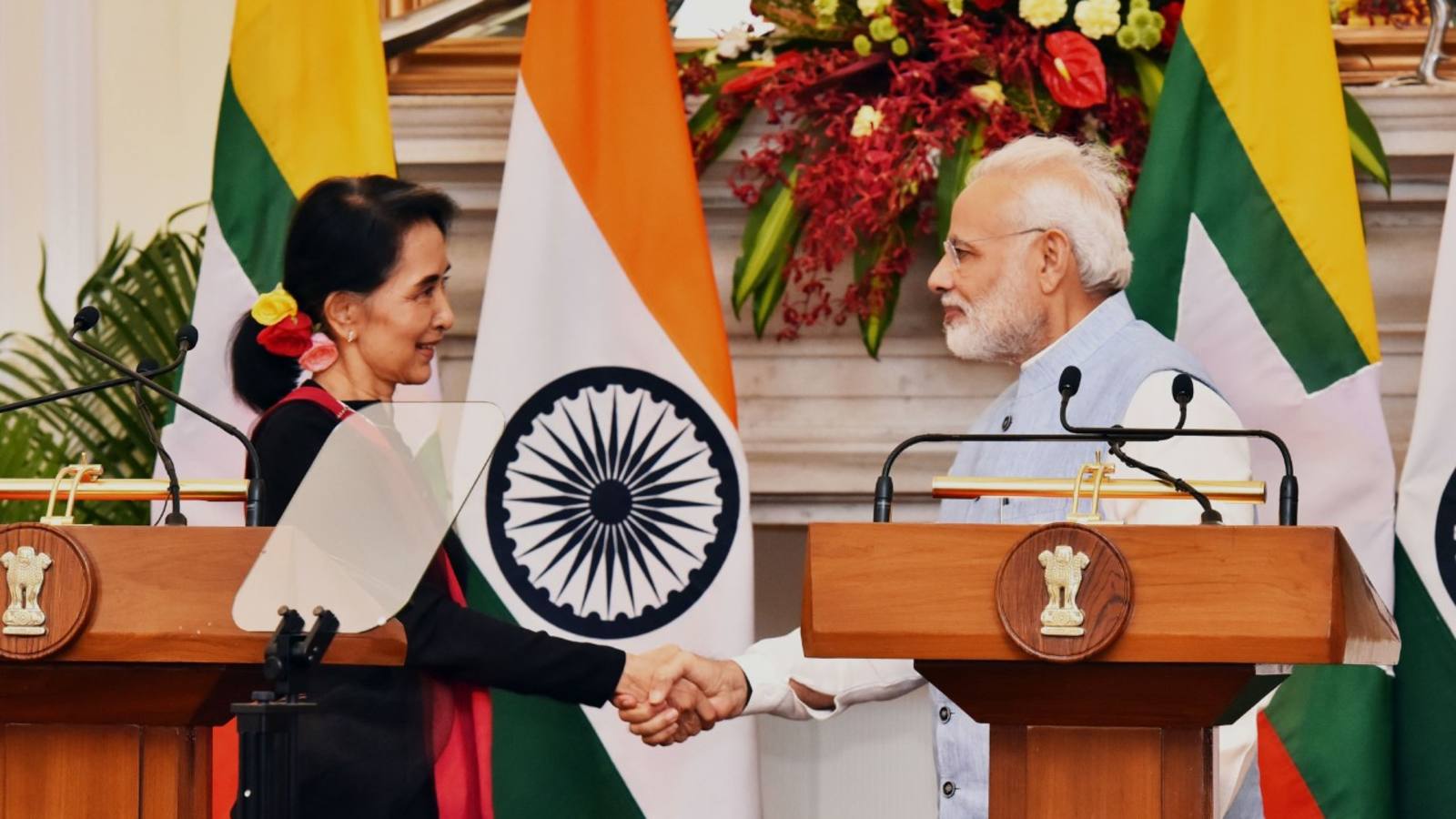 However, the 1,360km trilateral highway, conceptualized over 15 years ago, has made slow progress and is already beyond  its 2016 completion deadline.

Prime Minister Narendra Modi, who came to power in May 2014, has maintained a keen interest in the project, which his government now hopes to complete by 2020. Connections through to Vietnam will eventually extend the overall length of the highway to 3,200 km.

Complementing the India-Myanmar-Thailand trilateral highway is the Kaladan multi-modal transport project in Myanmar connecting India's north-eastern Mizoram state with Sittwe port. The various infrastructure projects are at "different stages of implementation," according to Nitin Gadkari, India's minister for road transport, highways, shipping and water resources, who spoke this month at the ASEAN-India Connectivity Summit in New Delhi.

There is also an agreement to establish an ASEAN-India maritime transport working group involving India, Cambodia, Myanmar, Thailand, and Vietnam to develop a shipping network. 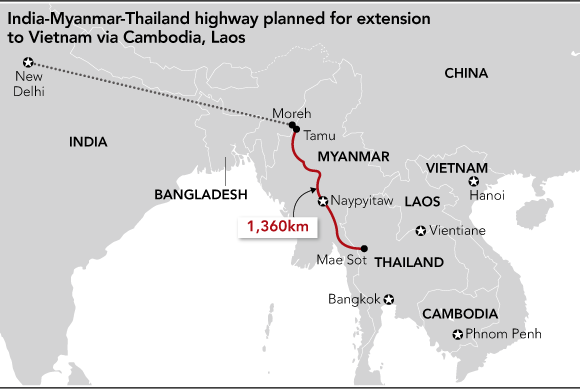 At the ASEAN Business and Investment Summit in Manila on Nov. 13, Modi said his government's Act East policy "puts this region at the centre of our engagement," and cited progress on the trilateral highway. "We wish to build land, sea and air connectivity to this dynamic region," he said.

In September 2016 at an India-ASEAN summit in Vientiane, the Laotian capital, Modi proposed a joint task force on connectivity between the trilateral highway and Cambodia, Laos, and Vietnam. India continues to consult with ASEAN on the project, which will promote trade and production networks.

Since most of the roads from Thailand to Vietnam are already in place, "It is just about connecting dots," a senior government official told the Nikkei Asian Review. There is therefore not expected to be much difficulty linking the trilateral highway to Vietnam.

Analysts believe the Modi government is keen to complete the highway given China's BRI.

"Connectivity is a thrust area in Modi government's Act East policy," Rajaram Panda, a visiting professor at Japan's Reitaku University, told the Nikkei Asian Review, noting that the project has been fast tracked. He confirmed its importance in countering BRI, but noted that China's foreign policy outlook "lacks transparency" in its economic component.

"There seems to be a grand design behind China's policy that disrespects the established global rules in several regional issues, raising the specter and fear of domination, which is why there has to be a counter narrative," said Panda. "BRI is seen as a route to create [a] debt trap for many poorer countries who join the China-initiated projects -- there is no transparency at all in BRI."

Under BRI, an economically slowing China has continued to try and expand its global influence by encouraging countries to fund their infrastructure needs using Chinese funds. "These funds may not be in the form of a grant, and would seek a return on the long-term investments made, which in some cases could accrue much higher interest rates than offered under [overseas development assistance]," Rahul Mazumdar, an economist with Exim Bank, India, wrote in the Hindu Business Line.

Pankaj K. Jha, a professor of defense and strategic studies at the O.P. Jindal Global University, said, "In terms of economic clout, China is far ahead but strategically [the highway] is going to emerge as a counter way."

"Furthermore there's an inherent apprehension that the promises made under BRI might not be fulfilled by China," said Jha, noting that countries in the BRI project like Laos, Malaysia, and Singapore are wondering when the largesse will reach them. "Patience will run over in the next two to three years," he predicted. "Dreams are good, but Chinese dreams and reality are different."

The trilateral highway from Moreh in India's north-eastern Manipur state to Mae Sot in Thailand passing through central Myanmar was first discussed at a trilateral ministerial meeting on transport linkages in Yangon in April 2002. In 2004, the decision to construct it was taken, and the cost estimated at $700 million which was to be borne by the countries involved and the Asian Development Bank. The "highway of opportunity and friendship" was touted as a means to not only to facilitate the movement of goods and services, but also of people and ideas.

Work on the highway has been slow "due to human resources, technology, advisory service, and funding constraints," according to an Asian Development Bank Institute working paper published in Dec. 2014. However, commitment in the project, was revived after India offered a $500 million loan to Myanmar in 2012, partly to renovate segments of the highway. 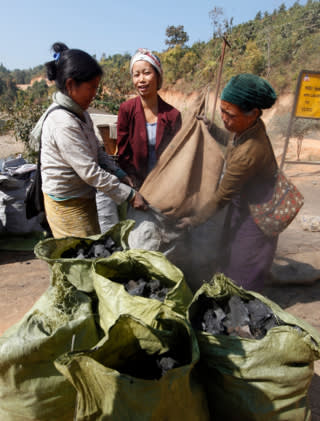 Cross-border traders from Myanmar with sacks of charcoal to sell in the northeastern Indian border town of Moreh. REUTERS/Rupak De Chowdhuri   © Reuters

According to Gadkari, financing is the "key to success." India has offered $1 billion in credit to promote projects that support physical and digital connectivity between India and ASEAN, he said. It has also set up a project development fund of $77 million to support manufacturing hubs in Cambodia, Laos, Myanmar, and Vietnam.

A 150km India-Myanmar Friendship Road from the Moreh-Tamu border region to Kalemyo-Kalewa in Myanmar -- which was built with New Delhi's assistance and inaugurated in Feb. 2001 -- forms part of the trilateral highway.

India has taken up the work of repair of 69 bridges built during World War II, including approach roads, on the Tamu-Kalewa route, along with the construction/upgrade of the 121-km Kalewa-Yargyi road in Myanmar, the only ASEAN nation with which it shares a border.

In September, the National Highways Authority of India awarded the work worth 11.77 billion rupees to upgrade Kalewa-Yargyi section, to a joint venture of Punj Lloyd and Varaha Infra. This work is expected to be completed by September 2019.

"The main [issue is] upgrading bridges [in Myanmar] along the trilateral highway. Once the bridges are built, there won't be much [left to do] as the Thailand part is already completed," Jha of O.P. Jindal Global University said.

Myanmar is to build the 65-km Yargyi-Monywa segment, and from Monywa, a 136-km two-lane highway to Mandalay already exists, the Observer Research Foundation said in a report authored by Naresh Bana and K. Yhome.

From Mandalay, the trilateral highway route will be -- Mandalay-Meiktila Bypass-Nay Pyi Taw-Phayagyi-Thaton-Hpa-An-Karaweik Myawaddy/Mae Sot, it points out. The road from Mandalay to Hpa-An has already been developed.

The Karaweik-Myawaddy road, whose construction began in 2012, was opened in August 2015. "The prolonged ethnic conflicts in Myanmar in this region have affected smooth implementation of the project," Bana and Yhome wrote.

"The trust deficit between the centre at Nay Pyi Taw and the peripheries has also created problems," they said, observing that local rights groups alleged forced displacement and unfair compensation during the upgrading of the 66-km Karaweik-Eindu road in Myanmar's Kayin state, for which the ADB approved a $100-million loan as part of the Greater Mekong Sub-region East-West Corridor.

ASEAN as a whole ranks as India's fourth-largest trading partner. But the size of that trade dropped to $65 billion in the fiscal year ended March 2016, from $76.5 billion the previous year, essentially due to declining commodity prices as the global economy slowed. In the year ending this March, the bilateral trade stood at $70 billion.

Now, the Indian government under Modi has put a special focus on strengthening relations with ASEAN, prioritizing connectivity projects under its Act East policy.

"As Delhi gives a further diplomatic push to strengthening ties with the CLMV countries (Cambodia, Laos, Myanmar and Vietnam) and Thailand under the Modi government's 'Act East' policy, the [trilateral] highway project could be a game changer for India-Mekong ties and the wider Southeast Asia," the ORF's Bana and Yhome said.