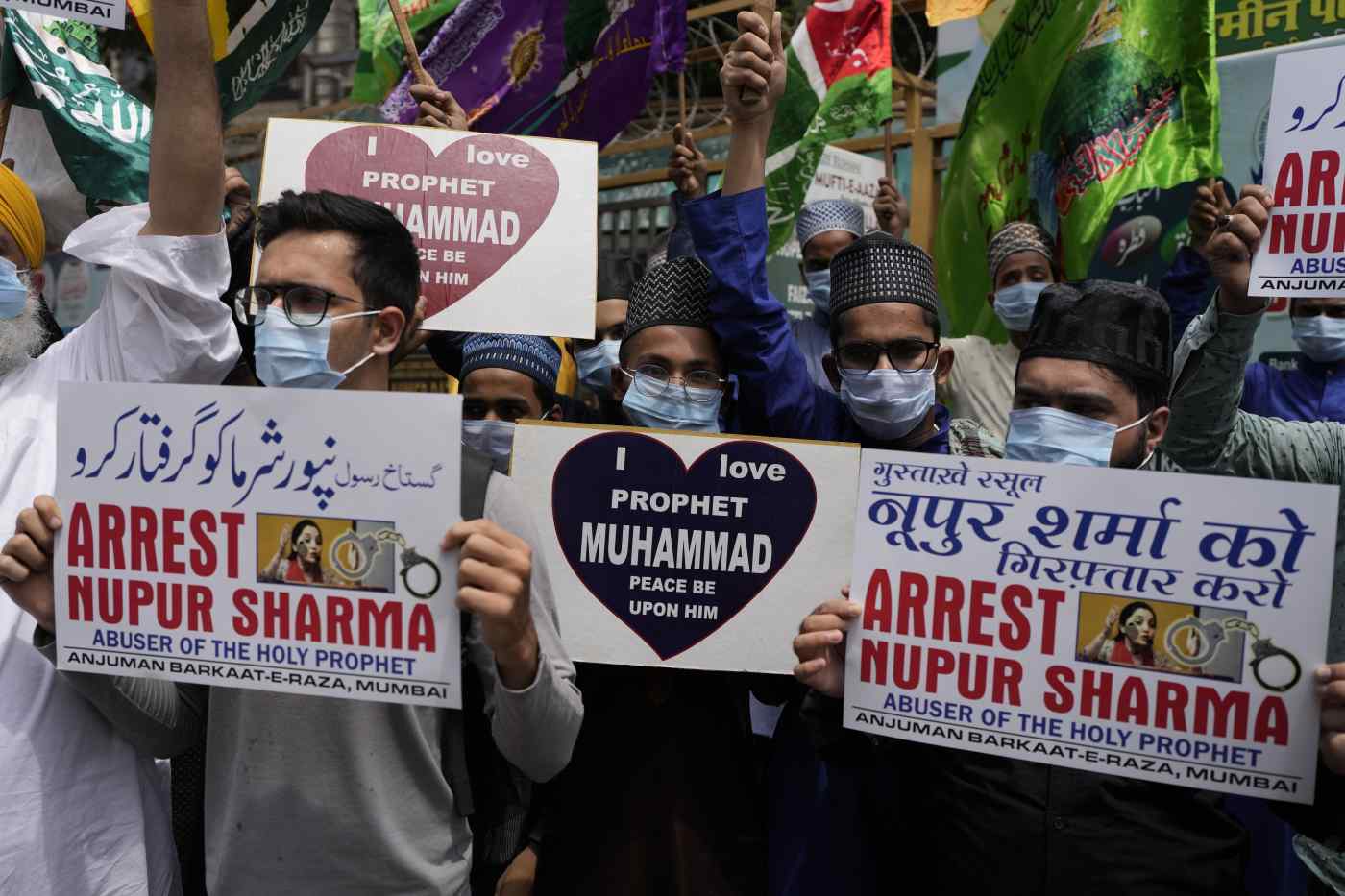 Indian Muslims demand the arrest of Nupur Sharma, a spokeswoman of the governing Hindu nationalist party, in Mumbai on June 6 after she made derogatory references to Islam and the Prophet Muhammad.   © AP
June 7, 2022 12:41 JST | India
CopyCopied

NEW DELHI (AP) -- India is facing major diplomatic outrage from Muslim-majority countries after top officials in the governing Hindu nationalist party made derogatory references to Islam and the Prophet Muhammad, drawing accusations of blasphemy across some Arab nations that have left New Delhi struggling to contain the damaging fallout.

At least five Arab nations have lodged official protests against India, and Pakistan and Afghanistan also reacted strongly Monday to the comments made by two prominent spokespeople from Prime Minister Narendra Modi's Bharatiya Janata Party. Anger has poured out on social media, and calls for a boycott of Indian goods have surfaced in some Arab nations. At home, it has led to protests against Modi's party in some parts of the country.

The controversial remarks follow increasing violence targeting India's Muslim minority carried out by Hindu nationalists who have been emboldened by Modi's regular silence about such attacks since he was first elected in 2014.

Over the years, Indian Muslims have often been targeted for everything from their food and clothing style to interreligious marriages. Rights groups such as Human Rights Watch and Amnesty International have warned that attacks could escalate. They have also accused Modi's governing party of looking the other way and sometimes enabling hate speech against Muslims, who comprise 14% of India's 1.4 billion people but are still numerous enough to be the second-largest Muslim population of any nation.

Modi's party denies the accusations, but India's Muslims say attacks against them and their faith have increased sharply.

The anger has been growing since last week after the two spokespeople, Nupur Sharma and Naveen Jindal, made speculative remarks that were seen as insulting Islam's Prophet Muhammad and his wife Aisha.

Modi's party took no action against them until Sunday, when a sudden chorus of diplomatic outrage began with Qatar and Kuwait summoning their Indian ambassadors to protest. The BJP suspended Sharma and expelled Jindal and issued a rare statement saying it "strongly denounces insult of any religious personalities," a move that was welcomed by Qatar and Kuwait.

Later, Saudi Arabia and Iran also lodged complaints with India, and the Jeddah-based Organization of Islamic Cooperation said the remarks came in a "context of intensifying hatred and abuse toward Islam in India and systematic practices against Muslims."

India's Foreign Ministry on Monday rejected the comments by the OIC as "unwarranted" and "narrow-minded." On Sunday, India's embassies in Qatar and Kuwait released a statement saying the views expressed about the Prophet Muhammad and Islam were not those of the Indian government and were made by "fringe elements." The statement said that strong action had already been taken against those who made the derogatory remarks.

The criticism from Muslim countries, however, was severe, indicating that insulting the Prophet Muhammad was a red line.

Qatar's Foreign Ministry said it expected a public apology from the Indian government, and Kuwait warned that if the comments go unpunished, India would see "an increase of extremism and hatred." The Grand Mufti of Oman described the "obscene rudeness" of Modi's party toward Islam as a form of "war." Riyadh said the comments were insulting and called for "respect for beliefs and religions." And Egypt's Al-Azhar Mosque, the Sunni world's foremost institution of religious learning, described the remarks as "real terrorism (that) can plunge the entire world into severe crises and deadly wars."

The remarks made by Sharma during a TV program in India and Jindal in a tweet risk damaging India's ties with Arab nations.

India maintains strong relations with Persian Gulf countries, which rely on millions of migrant workers from India and elsewhere in South Asia to serve their tiny local populations and drive the machinery of daily life. India also depends on oil-rich Persian Gulf Arab countries, such as Saudi Arabia, to power its energy-thirsty economy.

The remarks also led to anger in India's archrival and neighbor, Pakistan, and in Afghanistan.

On Monday, Pakistan's Foreign Ministry summoned an Indian diplomat and conveyed Islamabad's "strong condemnation," a day after Prime Minister Shahbaz Sharif tweeted that the comments were "hurtful" and "India under Modi is trampling religious freedoms & persecuting Muslims." India's Foreign Ministry responded by calling Pakistan "a serial violator of minority rights" and said it should not engage "in alarmist propaganda and attempting to foment communal disharmony in India."

Criticism also came from Kabul. The Islamic Emirate of Afghanistan said the Indian government should not allow "such fanatics to insult ... Islam and provoke the feelings of Muslims."

Modi's party also faced anger from some of its own supporters, but it was for a different reason. Many Hindu nationalists posted comments on social media saying the government was buckling under international pressure.

Anti-Muslim sentiments and attacks have risen across India under Modi. Last week, U.S. Secretary of State Antony Blinken said India was seeing "rising attacks on people and places of worship," eliciting a response from New Delhi, which called the comments "ill-informed."

More recently, religious tensions have escalated after some Hindu groups went to a local court in northern Varanasi city to seek permission to pray at a 17th-century mosque, claiming that it was built by demolishing a temple. Critics say these tensions have been further exacerbated by Indian television anchors during raucous debates.