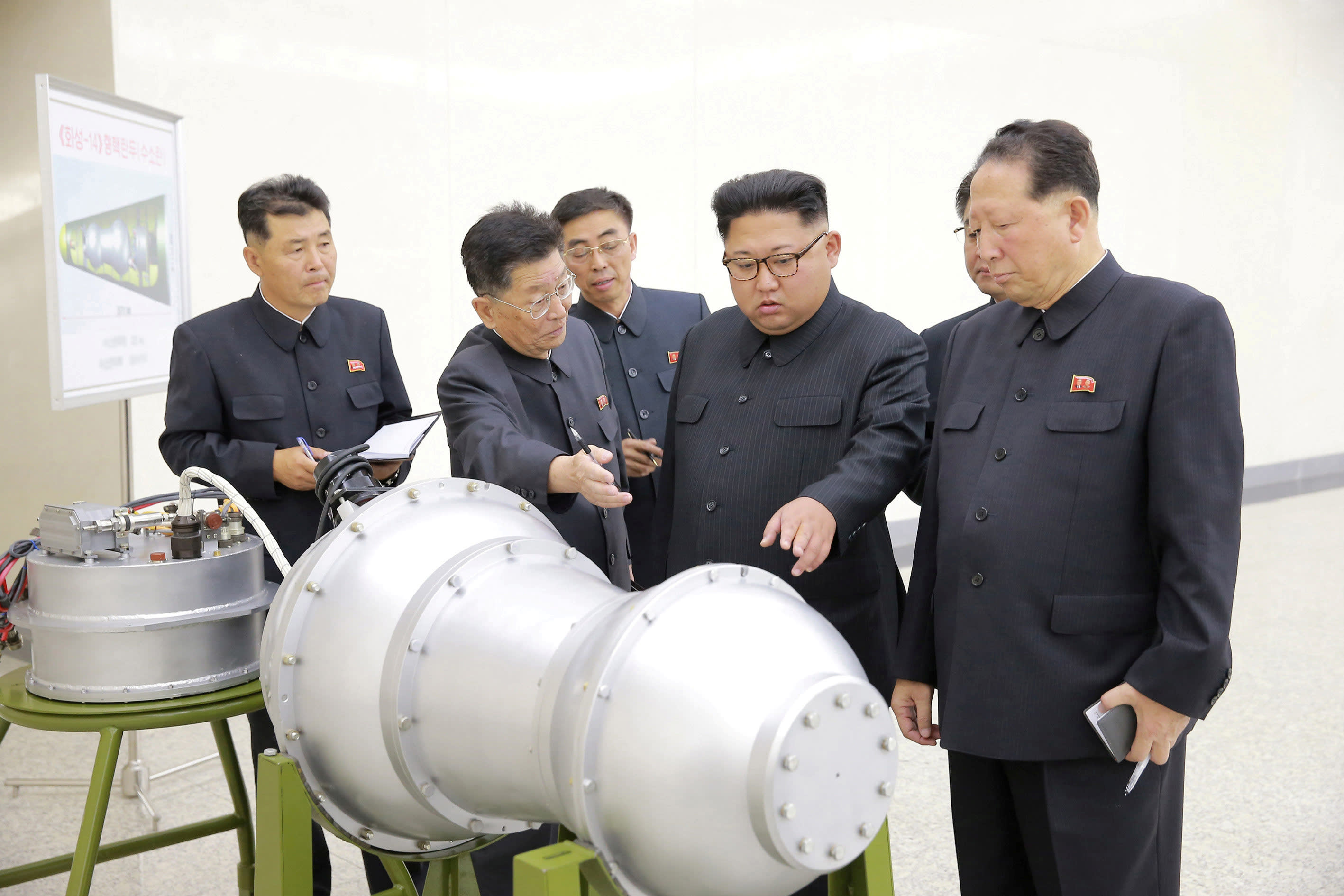 TOKYO -- North Korea's anxious neighbors on Tuesday cautiously welcomed the passage of new United Nations sanctions against the regime. But while the ink is barely dry on the Security Council resolution, experts are already questioning the effectiveness of the hastily decided measures.

The resolution, which received unanimous backing, came about a week after the U.S. put forward a draft. China and Russia, which had opposed Washington's initial call for a total ban on oil supplies to the North, supported the watered-down version and sent their own strongly worded warnings to Pyongyang.

Japanese Prime Minister Shinzo Abe on Tuesday morning said the world has shown a united front against the increasingly belligerent Kim Jong Un regime. By imposing tougher restrictions, Abe said, "the international community has made clear its will that North Korea must change its behavior."

The South Korean government issued a similar statement the same day. "The latest [Security Council] resolution represents the international community's renewed commitment not to tolerate the North's nuclear and missile development," the government said, adding, "It also sends a grave warning to the North Korean regime that its continued reckless provocations will only end up deepening its economic isolation and diplomatic pressure."

The new resolution follows North Korea's sixth and largest nuclear test earlier this month, and its launch of a ballistic missile over Japan in August. It caps shipments of crude oil and other petroleum products to the North, while banning all of the country's textile exports. The sanctions also prohibit new work authorizations for North Korean migrant workers.

Still, the resolution is significantly weaker than an earlier version that sought a full oil embargo and would have frozen assets of Kim Jong Un. Beijing and Moscow -- which generally take Pyongyang's side -- pushed back hard against these measures.

Following the passage of the resolution, China sent a firm message to its defiant ally.

Liu Jieyi, China's ambassador to the U.N., said North Korea should "take seriously the expectations and will of the international community" and halt its nuclear and ballistic missile development.

At the same time, Liu called on all parties to remain "coolheaded" and refrain from stoking tensions, while also saying that negotiations should resume "sooner rather than later." To kick-start talks, China and Russia have proposed a dual suspension of North Korea's nuclear and ballistic missile testing as well as U.S. and South Korean military exercises.

The new resolution itself calls for restarting the six-party nuclear talks, which involve the U.S., China, Russia, the two Koreas and Japan.

Quick on the draw

Meanwhile, the Russian permanent representative to the United Nations, Vasily Nebenzya, made it clear that Moscow "does not accept North Korea's claims of nuclear power status," according to the Russian news agency Tass. Nebenzya was also quoted as saying that Russia "supported all the U.N. Security Council resolutions demanding that Pyongyang put an end to its nuclear and missile programs in order to denuclearize the Korean Peninsula."

Experts noted the significance of China and Russia both agreeing to the new sanctions so quickly. The two countries have a reputation for dragging their feet on issues raised by Washington.

"The speed with which the resolution was approved speaks to the sense of crisis and concern within the international community," said Hajime Izumi, a North Korea expert and professor at Tokyo International University. By softening the content of the resolution, Washington has given Pyongyang room to climb down from its bellicose posture, while creating room for dialogue, Izumi said.

Still, North Korea watchers have their doubts about the effectiveness of the new penalties, at least when it comes to achieving the ultimate goal: getting the regime to abandon its nuclear and missile programs.

Katsuhisa Furukawa, a former member of a U.N. panel of experts monitoring sanctions enforcement on North Korea, said the latest package will effectively deprive Pyongyang of all major sources of foreign currency. Yet, he holds little hope that the North will swear off nuclear weapons.

"I don't think North Korea will give up its nuclear weapons program just because it faces more economic hardships," Furukawa said, noting the country weathered hard times in the 1990s.

Tokyo International University's Izumi pointed out that next month marks the 10th anniversary of the second summit between North and South Korea -- an occasion Seoul might use to launch a diplomatic offensive. But if the regime continues its military provocations, experts say more sanctions would likely follow, including the possibility of a complete oil embargo.