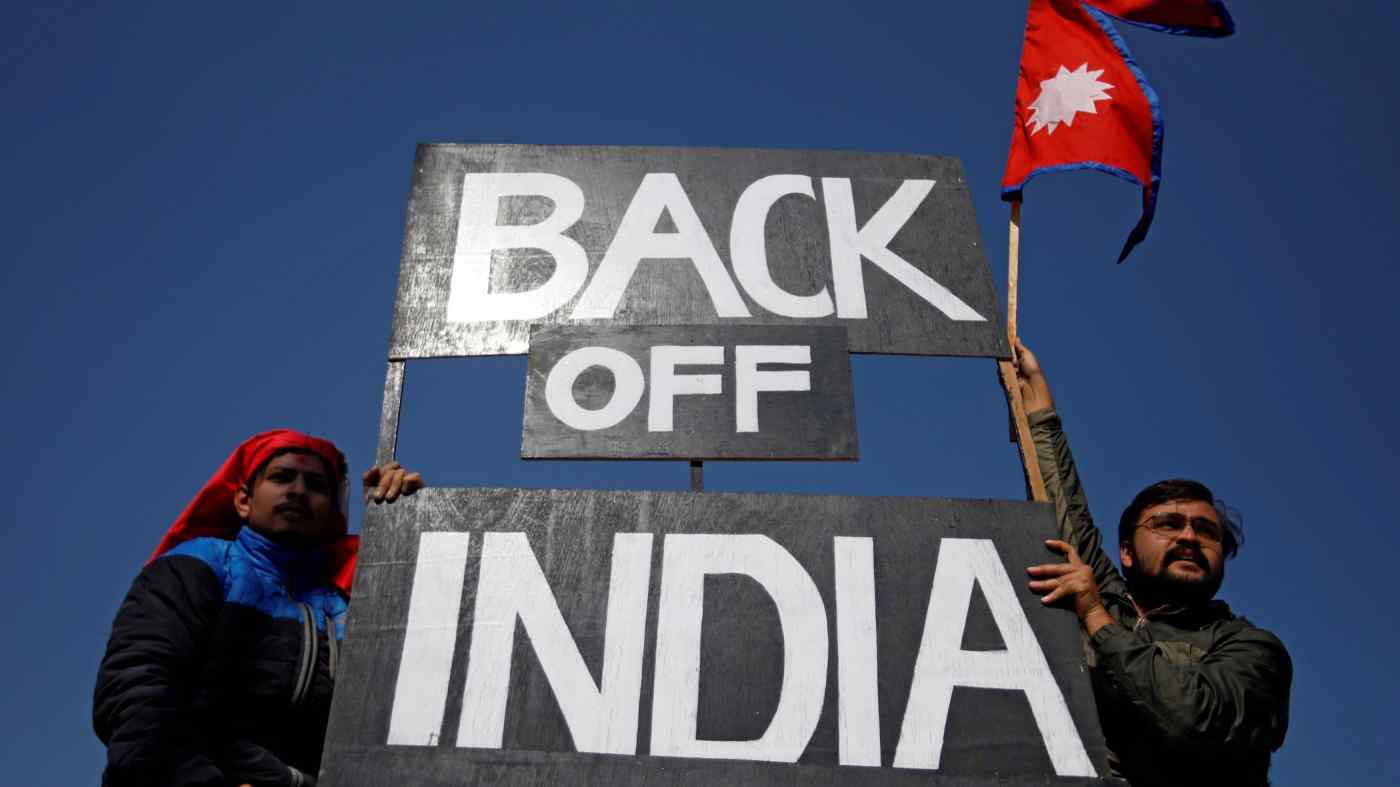 Students in Kathmandu tell India, which had just issued a new map of a disputed area, to back off in an earlier round of tit for tat politics that now has Nepal moving to cut off a route some Indians have taken to Nepali citizenship.   © Reuters
ARUN BUDHATHOKI, Contributing writerJune 30, 2020 15:15 JST | Nepal
CopyCopied

KATHMANDU -- Nepal is ratcheting up tensions with its outsized neighbor to the south, eroding the regional clout of India in such a manner that if Delhi were to respond it would risk giving China more sway in the Himalayas.

Nepal's latest snub comes in the form of a long-dormant bill that would amend the country's Citizenship Act by requiring foreign women married to Nepali men to wait seven years before becoming naturalized citizens. The amendment was recently endorsed by a parliamentary panel and is now expected to sail through the lower and upper houses in the coming weeks.

The endorsement comes only weeks after Nepal redrew its national border to claim a Himalayan region at Nepal's northwestern tip as its own. India also claims sovereignty over this land. Nepali President Bidhya Devi Bhandari authenticated the map bill on June 18, giving it legal standing.

Sarita Giri, a native of India and a member of parliament belonging to the opposition Janata Samajbadi Party (JSP), may have coaxed the bill out of its dormancy when she, a naturalized citizen, introduced a counter amendment against the new map bill.

The episode was closely watched by Nepalis, who were suddenly wondering whether naturalized citizens should be allowed to be parliamentarians.

It also gave the pro-China ruling Nepal Communist Party (NCP) a golden opportunity -- to take a bill that had been languishing for two years and start moving it toward passage.

NCP leader and Prime Minister K.P. Sharma Oli is shepherding the bill. As he does so, the ruling party, which has a majority in parliament, is expected to gain more voter support ahead of elections in 2022.

The landlocked country has two long borders, one with India and the other with China. And most Nepalis are either in a pro-India camp or are grouped in another camp made up of independent-minded citizens and pro-China residents.

North-south friction has been building up for decades now. In 1952, the population of the southern plain made up 35% of Nepal's total population. But by the time the census was taken in 2011, the figure was 50%. As a result, the northern population lost some of its political clout.

Pro-India opposition parties Nepali Congress (NC) and JSP fear that an amended citizenship law would ultimately reduce the population of the Terai region and diminish the southern plain's political sway.

"National well-being and national security are of paramount importance to any patriotic Nepali," said Minendra Rijal, a member of parliament who belongs to the pro-India Nepali Congress. "But let us not look for any possible excuse to become an introvert nation in today's world."

Ashok Swain, an Indian professor at the Department of Peace and Conflict Research, Uppsala University, Sweden, told the Nikkei Asian Review that Nepal's ruling party will use the citizenship amendment "to encourage further anti-Indianism in the country. The citizenship issue is an easy way of inciting nationalism and further encouraging the 'we-they' divide. ... [The NCP is] following the same formula which [India's ruling party] has followed in India."

Swain believes Nepali Prime Minister Oli has been ideologically closer to China, though Oli has adopted a practical foreign policy in the past.

But "in recent months," Swain said, "he has come out openly and given statements which are directly critical of India and India's policies."

Swain also said Oli "is adopting an overt nationalist approach to strengthen his political position at home as the anti-Indian feeling is quite strong these days in Nepal."

Nepal has traditionally relied on India. Because the nations keep their border open, most of Nepal's imports come through India, and many Nepalis are eligible to travel to India without a visa.

But in 2015, when Nepal promulgated its new constitution, India openly intervened, recommending against the move. At the time, Nepal's pro-India parties were criticizing how new borders were drawn between constituencies, saying the political map would weaken the south's political voice. When the constitution was put into effect, India reacted with an economic blockade.

That was "a disaster," said Bipin Adhikari, a Nepali expert on constitutional law based in Kathmandu. People were unable to obtain daily goods and suffered.

"It was an expression of hegemony and fundamentally a wrong strategy against a sovereign country exercising its right to self-determination regarding making a new constitution," Adhikari said. The blockade "opened up Nepalese eyes."

This year, Nepal redrew its national boundaries to encompass the disputed territories after India opened a road in a disputed Himalayan border area.

Swain said that since Indian Prime Minister Narendra Modi's "neighborhood policies" have been unpredictable, another blockade cannot be ruled out.

"If a blockade takes place," he said, it will destroy any prospect for improved Nepal-India relations in years to come "and will take Nepal-China cooperation to a greater height."