And with India's options for cheaper power widening, there are concerns that the Nepalese government will suffer: It has been counting on electricity sales to bring in badly needed foreign exchange.

Over the last four years, two foreign companies from China and Norway have pulled out of two hydropower projects. One was taken over by a local company, but it was downsized in July due to the dimming profit outlook.

With a potential hydropower capacity of at least 40,000 megawatts from its fast-flowing Himalayan rivers, Nepal is looking to the energy sector to spark economic growth. The communist government, which came to power in February 2018, planned to develop 15,000 MW within next 10 years. If it reaches that goal, its hydropower exports could be worth 250 billion Nepali rupees ($2.18 billion) annually.

Nepal's current peak electricity demand is 1,300 MW. During the dry winter months, when reduced water flows limit its hydropower generation, it imports 500 MW from India. When projects are completed next year, they will nearly double Nepal's hydropower capacity from 1,100 MW to 2,000 MW. That would give it an energy surplus of 500 MW during the monsoon season.

The country cannot use that surplus because it lacks the energy-intensive industries and mass-transit systems. Nepal hopes India, its huge neighbor to the south, will be a ready market for its electricity. But relations between Kathmandu and New Delhi are rocky. In 2015, Nepal accused India of imposing a border blockade and choking off the supply of fuel and other essentials to the landlocked country. Despite signing a Power Trade Agreement in 2014 aimed at easing flows of electricity across the frontier, the process has been stalled by the lack of a policy framework on both sides.

Two years later, India reversed its position on cross-border power trade. Its Guidelines on Cross Border Trade of Electricity, issued in December 2016, defined electricity as "a strategic issue." The guidelines declared that only companies that are majority-owned by the Indian government or the domestic private sector are authorized to take part in cross-border electricity trade.

Industry experts, however, have cautioned that the policy still gives India the upper hand with respect to power trade with Nepal.

India has an installed power generation capacity of 360 gigawatts, of which 227 GW comes from thermal sources such as coal. Another 45 GW comes from hydropower, 6 GW from nuclear and 80 GW from renewables, including solar and wind. Because its supply has overshot growth in demand over the last two decades, India already has a power surplus, according to Sagar Prasai, co-author of a 2018 study on electricity trading in eastern South Asia.

India's electricity surplus arose "because India didn't want to reduce its growth rate forecast of around 8% to 12% from the early 2000s," Prasai told the Nikkei Asian Review. "There's a political reason behind that. The power sector can't challenge a projection made by an elected government."

But there is hope in India's move toward renewable energy. The government aims to install 175 GW of renewable energy capacity by 2022 to meet its commitments under the Paris Agreement on climate change, said Prasai, a former country representative of Asia Foundation in India. "Hydro plants can generate electricity constantly, whereas solar and wind power is intermittent. [And] it takes several hours for a coal plant to start generating power," he said. "So, Nepal's hydropower can serve as a stopgap measure in India's energy mix."

Nepal's lack of a large domestic market for power, as well as uncertainty in the Indian market, has prompted foreign builders to abandon hydropower projects in Nepal. In early 2016, Norwegian energy producer Statkraft abandoned plans to develop the 650 MW Tamakoshi III hydropower project in Nepal's eastern Dolakha district. In 2018, China's CWE Investment, a subsidiary of China Three Gorges, canceled an agreement to build 750 MW West Seti hydro power project in western Nepal, citing a lack of clarity about who would buy the power. 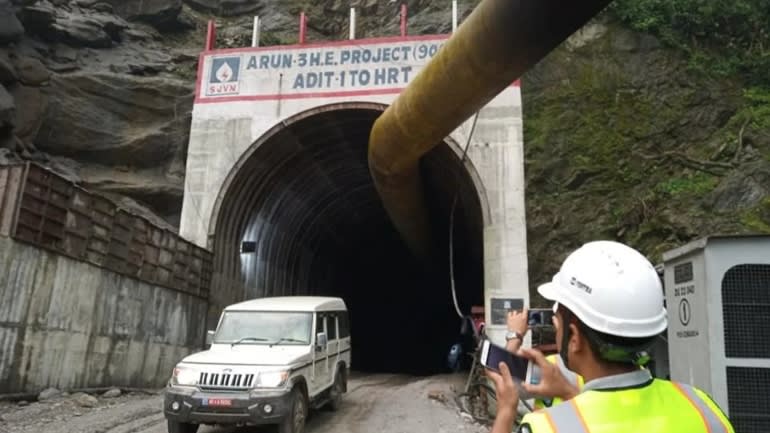 A tunnel at the site of Arun III hydroelectricity project in Sankhuwasabha district in northeastern Nepal. The 900 MW plant is being developed by India’s state-owned Satluj Jal Vidyut Nigam. (Courtesy of Investment Board of Nepal).

In July, a Nepalese company, TBI Holdings, announced a joint venture with China's YEIG International and the Shanghai Investigation, Design and Research Institute to move ahead with the $500 million Tamakoshi III project. But officials expressed surprise at a decision to downsize it. "I learned from the authorities that there was no market for a project with a huge installed capacity of 650 MW. Hence it was reduced to 200 MW," Dilli Bahadur Singh, chairman of Nepal Electricity Regulatory Commission, told The Himalayan Times newspaper in late July.

"Many factors, including a lack of transmission lines or an underdeveloped market, can force capacity reductions. Although projects can be expanded in a phase stage of construction, cutting capacity for an export-oriented project like Tamakoshi III means [the foreign investor] felt insecure about the Indian market," said Krishna Dulal, a Kathmandu-based hydropower developer.

Nepal also sees Bangladesh as a potential buyer of its surplus energy. Bangladesh has an installed generation capacity of 20,000 MW and plans to double that to 40,000 MW by 2030. While its main power source, natural gas, is on the wane, Bangladesh is considering an energy mix of coal, renewables and imports to meet its energy needs. In September 2018, Nepal and Bangladesh signed an agreement to trade hydropower, but a trilateral agreement with India, which borders both countries, remains elusive.

Bangladesh has shown interest in buying electricity from Upper Karnali, a 900 MW project to be developed by Indian company GMR. But the company has failed to obtain financing for the project despite repeated extensions of the deadline. Over the last two years, a splinter Maoist party bombed construction sites and offices in the Upper Karnali project area, and that of the 900 MW Arun III being developed by the Indian government.

Because Nepal produces surplus energy during the summer, when demand is high in northern India, the two countries are ideally positioned to trade hydropower, experts say. But India's foreign policy priorities trump sound economics, said Prasai. "If India buys 4,000 MW or 5,000 MW ... that would be a big deal for Nepal. But there's no evidence that it will do so out of kindness. Nepal is treated more like a buffer" than a trading partner, he said.