Nepal warms to India on territory spat, cools to China 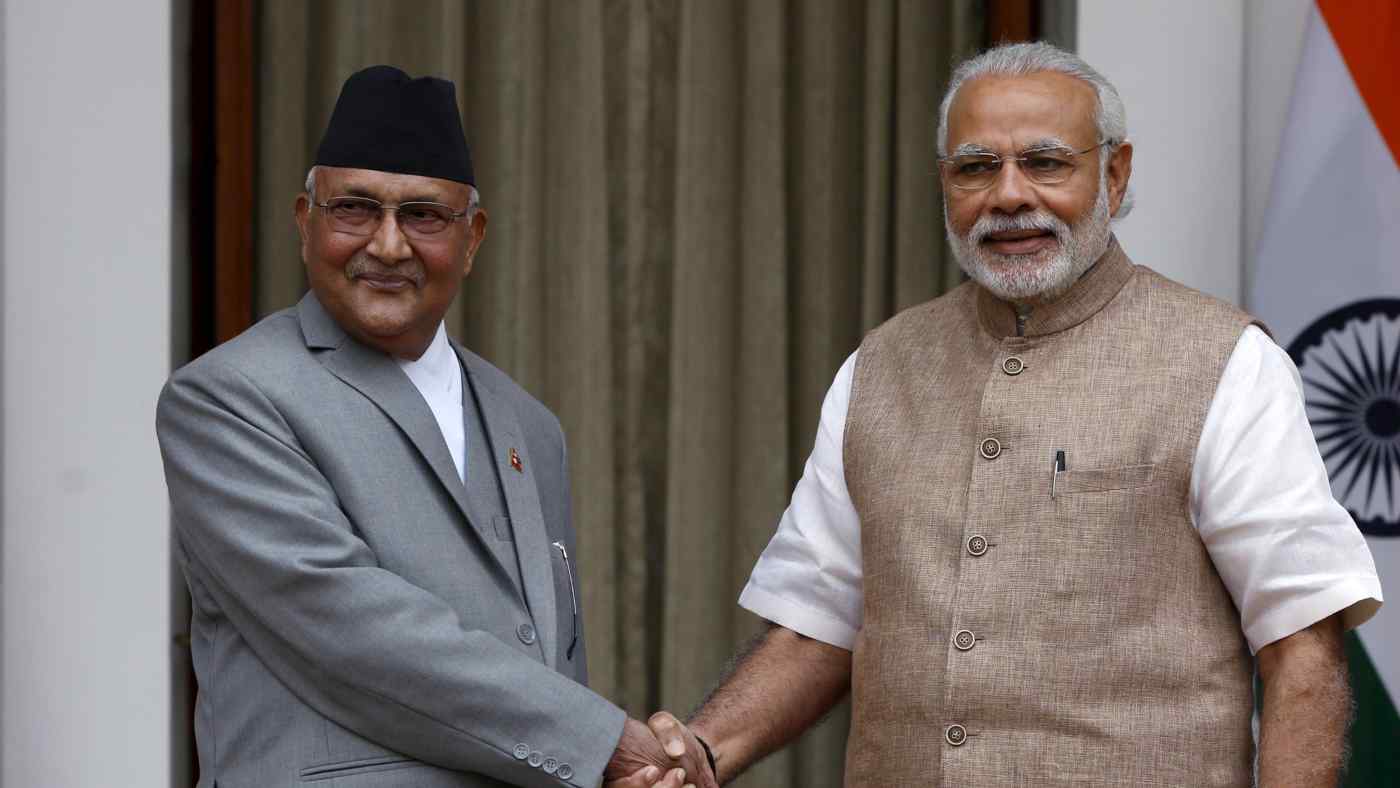 KATHMANDU -- More than four months into an acrimonious territorial dispute with India, Nepal's communist government has taken a more conciliatory approach to its powerful neighbor by withdrawing an inflammatory school book that includes a contentious map of a border area the two countries dispute.

On Sept. 18, Prime Minister K.P. Sharma Oli ordered the Ministry of Education to halt distribution to high school students of the 110-page 'Self Study Material on Nepal's Territory and Border.' The Nepali-language book also included a chapter on the campaign to reclaim disputed territory.

Kathmandu's move is being presented as an act of official restraint to avoid further riling India so that relations can be normalized.

"We want to maintain good relations with India on the basis of mutual respect and equality," Bhattarai said. "India and Nepal have divergent views on some issues including the territory of Kalapani along Nepal's northwestern frontier, which has remained a matter of dispute." He noted that this point of friction was addressed in a joint communique concerning matters both sides at least agreed upon issued after Prime Minister Narendra Modi's first visit to Nepal in 2014. Nepal has withdrawn a 110-page high school book -- 'Self Study Material on Nepal's Territory and Border' -- with a contentious map on the back that includes a border area disputed with India. (Photo courtesy of Government of Nepal)

The bilateral spat kicked off again in May when a constitutional amendment in Nepal included a revised national map. The first sign of a thaw came on Aug. 15 when Oli called Modi on the occasion of Indian Independence Day. Another cordial exchange followed on Sept. 17, Modi's birthday.

Earlier rapprochement efforts had failed, according to a Nepali official. On May 20, Oli and Modi were scheduled to speak by phone, but Indian officials pulled out without explanation.

China has been stepping up its influence in recent years, particularly when New Delhi blockaded Nepal in 2015 after taking exception to Nepal's new constitution. The five-month blockade choked off supplies of food, fuel and medicine to the landlocked country, creating a humanitarian crisis only months after a devastating earthquake killed 9,000 people. According to United Nations' data, India accounted for 65% of Nepal's total imports and 93% of fuel imports in 2017.

Oli inherited the embargo from his predecessor but stood up to India. He did not visit New Delhi until February 2016, by which time the blockade had been lifted.

Open criticism of India was a key plank in Oli's resoundingly successful election campaign in 2017.

New Delhi meanwhile concluded the blockade was "a mistake," according to Sudheer Sharma, who wrote Nepal Nexus, an account of Nepal's recent political history.

"India cannot impose a blockade every now and then," Sharma told Nikkei. "If you read the history, it has done so every 25-30 years, but there's a huge cost to using the measure: an entire generation becomes anti-Indian." For that reason, he believes India is unlikely to take such drastic action again.

Sridhar Khatri, a retired professor of political science at Tribhuvan University, is less convinced. He sees Oli's gestures as "symbolic not substantive," and considers differences between neighbors to be inevitable. "The key point is whether both sides attempt to resolve the problem," he told Nikkei. "This doesn't mean much if there's no real inclination towards resolution -- symbolism can only take you so far."

Kathmandu's recent rapprochement with New Delhi must also be cast in the light of alleged Chinese encroachment in Humla district in Nepal's north. Although Chinese diplomats and Nepali foreign ministry officials have both refuted the allegations, there have been demonstrations outside China's embassy in Kathmandu.

Some foreign policy analysts believe that even unfounded allegations point to growing tension between India and China. "The issue of border encroachment was raised by Indian media," said Khatri, pointing out sections of the press supportive of Bharatiya Janata Party, India's ruling party. "It's not a border problem -- some Indian officials have added fuel to the fire," he said.

Sharma, who also edits the influential Kantipur newspaper, said India's concerns are based on its view of the Himalayas as a natural defense. "New Delhi still sticks to the idea of Nepal as a Himalayan buffer between China and India," he said. "It is worried about growing Chinese influence in Nepal, but also doesn't want to lose ground to China."

The recent tense military standoff between China and India high in Ladakh along their Himalayan border has put Nepal on edge. Khatri said the tension could be a major flashpoint: "Any conflagration between India and China would affect Nepal -- the overall regional environment is getting worse." He noted that since the dispute with China, India has drawn closer to the U.S. Nepal has played its giant neighbors off against each in the past, but can it rise to the latest challenges? There are doubts.

"We don't have the diplomatic acumen and finesse required to deal with these developments," said Khatri. "Our understanding of both our neighbors is also very poor."

Sharma agreed that Nepal's diplomatic capabilities have limits. "There was negligence in terms of gathering evidence to back up our claim to the disputed territory, and if we don't prepare well this may well be another failure."