Okinawa base transfer limps along 25 years after deal

'Most dangerous base' caught between local opposition and US security concerns 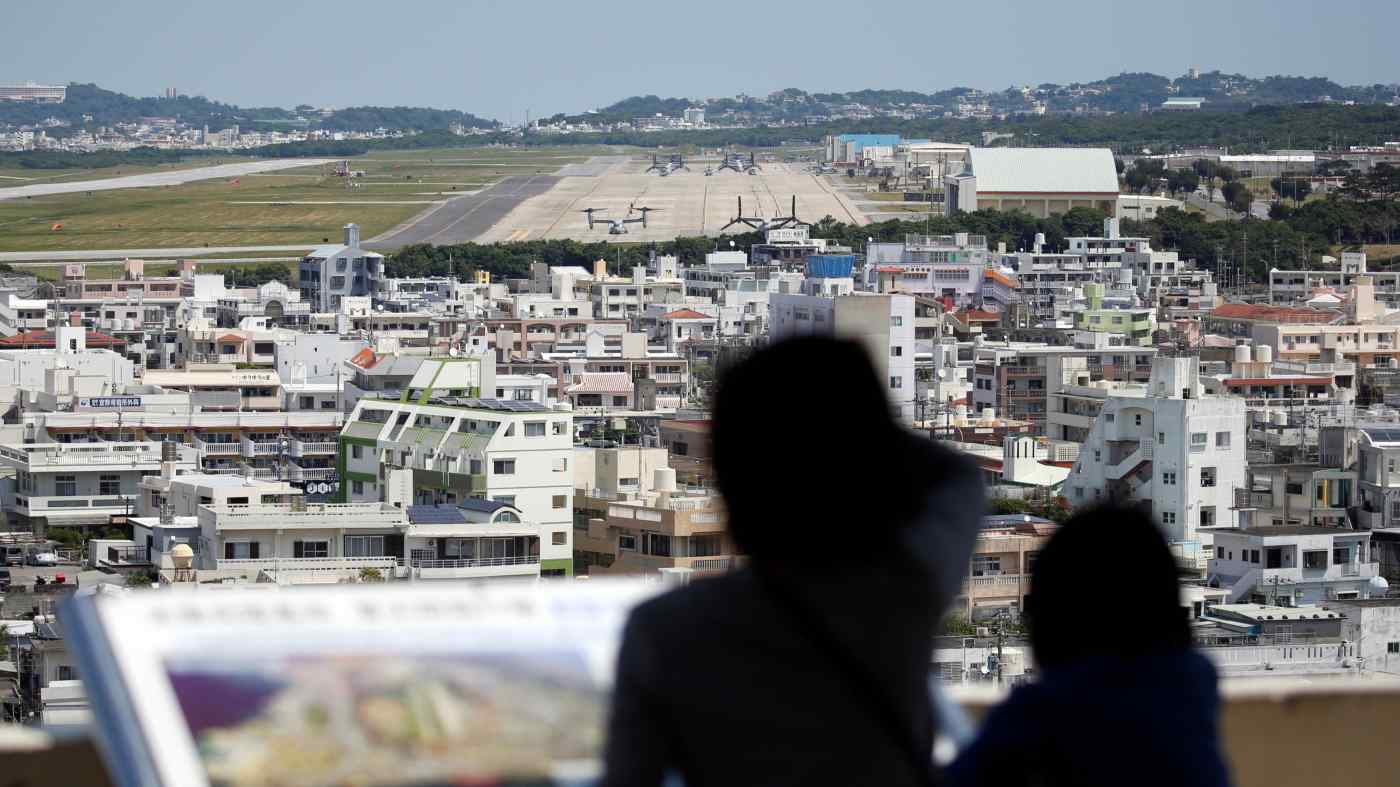 TOKYO -- Monday marked a quarter-century since the U.S. agreed to return its controversial Futenma Air Base in Okinawa to Japan, but a planned relocation remains years away at best, leaving a potential seed of instability in the alliance and raising questions about the future of a key deterrent against China.

At this month's "2-plus-2" meeting of top Japanese and U.S. defense and diplomatic officials -- the first under U.S. President Joe Biden -- Tokyo sought to emphasize progress on moving the base to the coast of Henoko in the city of Nago. Defense Minister Nobuo Kishi showed aerial photos of the new site, including before-and-after images of landfill work, and said construction is moving along steadily.

The two sides asserted in a joint statement afterward that the Henoko project is "the only solution that avoids the continued use of Marine Corps Air Station Futenma." The statement also stressed "the importance of peace and stability in the Taiwan Strait."

The two points are not unrelated -- Okinawa is situated at a strategically significant point about 650 km northeast of the strait, and the Futenma base there is vital to regional security.

The security environment surrounding Japan has only grown more challenging in the 25 years since the relocation deal. China has more than doubled its annual defense spending over the past decade as it modernizes its military, adding cutting-edge ships and fighter jets.

Beijing has been sailing government ships -- often with backup from nearby naval vessels -- more frequently in waters around the Japan-administered Senkaku Islands near Okinawa, which China claims as the Diaoyu, and is ramping up military pressure on Taiwan as well. The Okinawa base is key to Washington's and Tokyo's ability to respond rapidly to challenges in the area.

The problem with Futenma lies with its location right in the middle of the city of Ginowan, which means that American fighter jets fly directly above homes and schools in the area. The facility has been called "the most dangerous base in the world."

A U.S. helicopter crashed on a university campus in 2004, and a part from another helicopter landed on the grounds of an elementary school in 2017. Tokyo worries that if more accidents like these stoke further opposition to the base, the Japan-U.S. alliance itself could be shaken. 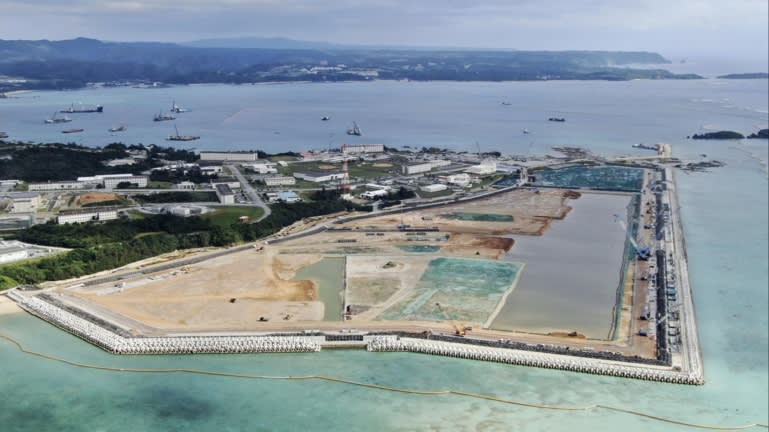 Although landfill work at the Henoko site began in December 2018, the projected time frame for the move has been pushed back to the 2030s or beyond.   © Kyodo

The transfer agreement followed the 1995 rape of a young local girl by three American servicemen, an incident that galvanized widespread opposition to the facility.

Tokyo and Washington rushed to address the issue, and on April 12, 1996, then-Japanese Prime Minister Ryutaro Hashimoto and Walter Mondale, then U.S. ambassador to Japan, reached a deal to return the base to Tokyo. Henoko was chosen as the site of a replacement facility in 1999.

But the move has not been welcomed by many locals who want the base out of the prefecture entirely. In just the last decade, previous Okinawa Gov. Takeshi Onaga, elected on an anti-base platform, revoked approval for land reclamation at the site, sparking a lengthy legal battle with the central government. His successor, incumbent Gov. Denny Tamaki, also opposes the plan.

The government began the landfill work in December 2018, but was forced to revise its plans when a survey found that part of the seafloor off the coast was too weak to support the planned facilities. While work resumed in 2019, the projected time frame for the move has been pushed back from fiscal 2022 at the earliest to the 2030s or beyond.

In the meantime, Washington has had to continue using Futenma, with all the risks it poses.

The two countries have been moving some of the base's functions out of Okinawa. But certain operations, such as helicopter transport, must remain in the prefecture, a senior Japanese defense official said.

A strategic shift by the U.S. military could change Okinawa's role. Navy Adm. Philip Davidson, head of the Indo-Pacific Command, called last month for a more dispersed deployment of American forces in the region. Keeping large numbers of troops concentrated in a small number of locations like Futenma leaves them vulnerable to a precision missile strike.

But "we shouldn't underestimate the forward deployment of U.S. forces [in Okinawa] as a deterrent against China," said Keio University professor Ken Jimbo.

Next year will bring two key elections, for the governor of Okinawa and the mayor of Nago, the planned site of the new base. Winning over local residents will be a difficult but crucial task for Prime Minister Yoshihide Suga's government.