Approximately 2,700 tons of ammonium nitrate, stored alongside other flammable items in the busy commercial port of Beirut, exploded and sent a devastating shock wave across the Lebanese capital. More than 200 people died, with some 7,000 injured.

Copland's 2-year-old son Isaac was killed when the blast destroyed her home, not far from the port. Now she and others are fighting for international justice -- and looking to Japan, for one, to help their cause.

"Isaac deserved a chance at life and that was taken from him," Copland said. "Now, he deserves justice. All of the victims deserve justice."

The explosion added to an economic crisis Lebanon was already suffering. A spring 2021 report by the World Bank noted that the Middle Eastern country's gross domestic product plummeted to $33 billion in 2020 from $55 billion in 2018, with GDP per capita falling around 40%.

The bank said Lebanon faces one of the most severe crises the world has seen since the mid-19th century. And it took the country's leaders to task: "For over a year, Lebanese authorities countered an assailment of compounded crises -- namely, the country's largest peacetime economic and financial crisis, COVID-19 and the Port of Beirut explosion -- with deliberately inadequate policy responses. The inadequacy is less due to knowledge gaps and quality advice and more the result of a combination of (i) a lack of political consensus over effective policy initiatives; and (ii) political consensus in defense of a bankrupt economic system, which benefited a few for so long."

Victims say the authorities' response to the explosion itself, and demands for accountability, has been no better.

"The Lebanese authorities promised that the domestic investigation would be completed within five days, but now, here we are a year later and we are still haven't received answers, let alone justice," Copland said. "The investigation has been marred by delays and political interference."

Copland said that is why she is "working with a collective of victims to call on the [United Nations] Human Rights Council, of which Japan is currently a member, to establish an independent, transparent fact-finding mission. Japan has the opportunity to play a key role in getting victims the justice they deserve. Japan could table the resolution required to establish such an investigation and/or they could vote in favor of such a resolution once it is put forward." The port area of Beirut where the blast occurred on Aug. 4, 2020, remains far from rebuilt. (Photo by Momoko Kidera)

The international community has offered aid. In the immediate aftermath, a U.N. flash appeal raised $167 million, according to U.N. News.

Japan is working with the U.N. Development Programme to back sustainable recovery projects in Beirut. Celine Moyroud, the UNDP resident representative, told Nikkei Asia that in partnership with the UNDP, the Japanese government is supporting efforts to strengthen disaster risk management and waste management in response to the Beirut disaster -- especially hazardous and electronic waste.

One example is a Material Recovery Facility project, which will create 150 direct jobs during the construction. In addition, the facility is expected to employ nearly 50 workers once operational, including women.

In line with the Recovery, Reform and Reconstruction Framework (3RF) for Lebanon -- worked out by the U.N. along with the European Union and World Bank -- Moyroud said Japan is assisting with an integrated response to Lebanon's numerous crises.

But residents lament the lack of support and action on the part of the Lebanese government.

George Bazidjian, a 60-year-old of Armenian Lebanese heritage, spoke to Nikkei about losing his 22-year-old daughter Jessica. At 6:07 p.m., when the explosion occurred, she was checking in for her night shift as a nurse at a hospital. He said she was a diligent nurse who would take time to prepare for work.

Bazidjian and his older daughter Rosaline went to the hospital to search for Jessica, though at the time they did not imagine she would be among the victims. They found her with a severe neck injury, on the verge of death. Her colleagues were trying to save her but she died soon after.

"We were a happy family. I had two angels," Bazidjian said.

He described his current life as "hell." He said he could not think of rebuilding the men's shirt factory he ran. He wears a badge with Jessica's picture and belongs to an association of more than 100 victims' families seeking justice. He speculated that the explosion was not an accident and ultimately holds the government -- which he described as a "mafia" -- responsible for Jessica's death. 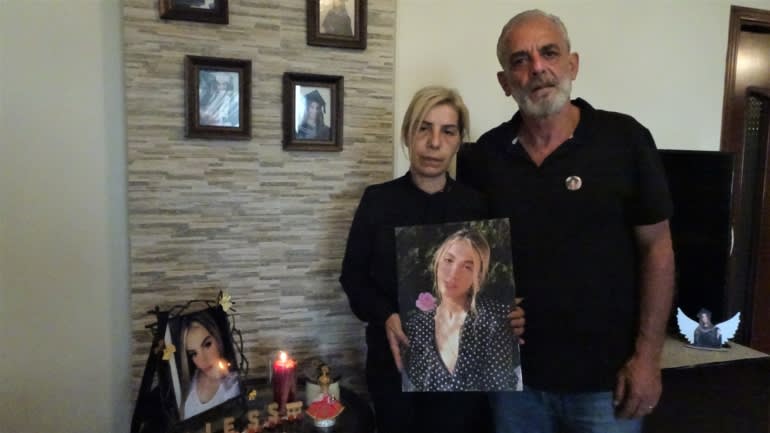 George Bazidjian and his wife lost their 22-year-old daughter Jessica in the explosion. (Photo by Momoko Kidera)

Though Lebanon has a new prime minister-designate, Najib Mikati, Bazidjian does not expect anything from him. "He's one of the guys that caused the blast. He was the PM when the nitrogen came. How can we expect any reforms from him? Unless we bring all the ministers from Europe, or Japan, there will be no change."

A stable government is considered a prerequisite for providing answers and accountability, as well as addressing the economic problems.

Nassib Ghobril, chief economist at Byblos Bank Lebanon, said, "Forming a government is just the first and basic step toward starting the reform process, and the 11-month delay in forming a government has put off the development and implementation of a comprehensive structural reforms plan."

Lebanon's currency has lost around 90% of its value since 2019. Ghobril explained that "today we have multiple exchange rates for the U.S. dollar in the Lebanese market, which reflects the continuing shortage of foreign currency liquidity in the absence of reforms to restore confidence and generate capital flows. The currency crisis cannot be solved separately or independently from other needed structural reforms and has to be part of a comprehensive structural reforms plan."

To begin getting the country back on track, Banque du Liban, the central bank, and the Ministry of Finance under the new government face the challenge of unifying the multiple exchange rates. This would be part of the reform plan the authorities need to bring to negotiations with the International Monetary Fund.

Once the two sides reach a deal on reforms and financing, Lebanese authorities would begin implementing the former and the IMF would disburse funds.

"I believe that one of the first measures that will need to be implemented is the unification of the exchange rates, most likely by floating the currency and abandoning the peg of the Lebanese pound to the U.S. dollar," Ghobril said. "But this can only happen after Banque du Liban starts replenishing its foreign currency reserves so it can intervene in the market to avoid exchange rate volatility."

In the meantime, the situation for ordinary Lebanese is "worsening by the day," the U.N. has warned.

The World Bank also painted a grim picture, noting more than half the population is likely already below the national poverty line. "The social impact of the crisis, which is already dire, could rapidly become catastrophic," the bank warned.