TOKYO -- A religious power struggle rooted in the Russia-Ukraine conflict is spilling over into Asia.

The conflict pits the Russian Orthodox Church, which has close ties with President Vladimir Putin's government, against the Ecumenical Patriarchate of Constantinople in Istanbul, recognized as the highest authority of what is officially known as the Orthodox Catholic Church.

The Russian church has effectively struck out on its own to open dioceses in Southeast Asia. This comes as Moscow also looks to strengthen its political and economic relations with the region, including by increasing arms exports. A bigger religious presence could help Putin exert more influence across the bloc.

"Four dioceses have been formed as part of the Patriarchal Exarchate in Southeast Asia: the Singaporean, Korean, Thai and Filipino-Vietnamese," Vladimir Legoyda, head of the Russian church's Synodal Department for Church, Society and Media Relations, told reporters in February.

"It has been decided that Metropolitan Sergei of Singapore and Southeast Asia will be the governing archbishop of the Singaporean diocese, and he has also been entrusted with the temporary running of the other three," Legoyda said.

This encroaches on the turf of the Eastern Orthodox Metropolitanate of Hong Kong and Southeast Asia, which is under the Constantinople patriarchate. 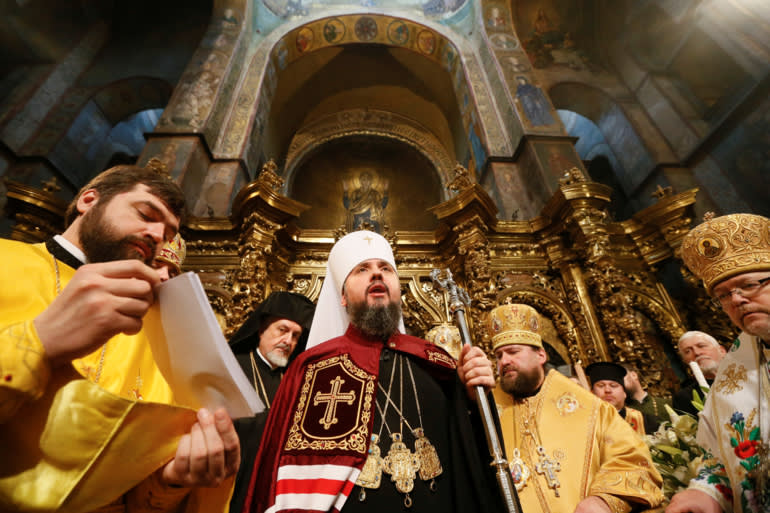 The head of the Orthodox Church of Ukraine takes part in an enthronement ceremony at Saint Sophia's Cathedral in Kiev in February. Constantinople has recognized the church's independence.   © Reuters

The simmering feud can be traced to Ukraine, where a pro-U.S. and Europe government established through the political upheaval of 2014 is still technically at war with Russia and is seeking to weaken Moscow's clout within its borders.

Bartholomew's decision provoked a fierce backlash from Russia, which continues to claim jurisdiction over Ukraine's Orthodox churches, as it has done for more than 300 years. Putin maintains that Russians and Ukrainians are essentially one people.

Categorically rejecting Bartholomew's decision at a news conference in late 2018, Putin said the patriarch of Constantinople was looking to profit by subjugating the Ukrainian church, with Washington's backing. The Russian Orthodox Church, for its part, declared it was breaking off relations with the Ecumenical Patriarchate of Constantinople.

This is the context in which the Russian church moved to establish the dioceses in Asia. Late in December, the Holy Synod set up a patriarchal exarchate in Southeast Asia, covering Singapore, Vietnam, Indonesia, Cambodia, Laos, Malaysia, Myanmar, the Philippines and Thailand, as well as the Korean Peninsula.

The Russian Church "will now act as if they [Constantinople] do not exist at all," Metropolitan Hilarion, the head of the Russian Synodal Department for External Church Relations, said in a TV interview. "Our purpose is missionary, our task is to educate, we are creating these structures for ministerial care about our flock, there can be no such deterring factors here." 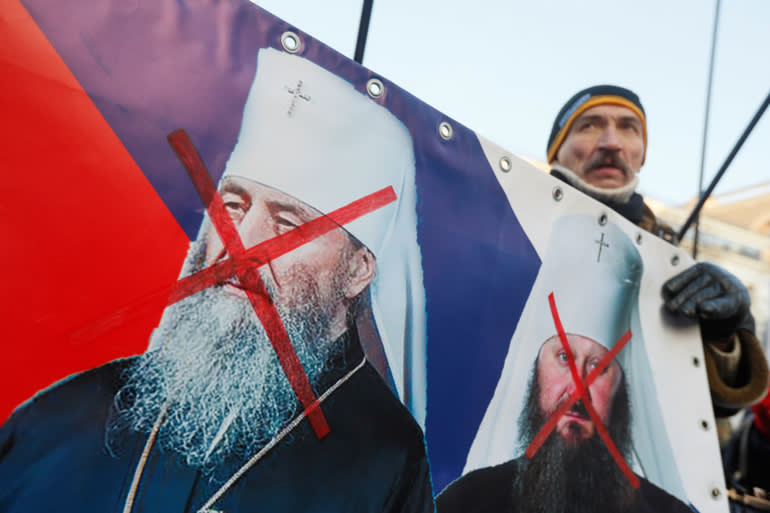 An activist from the Organization of Ukrainian Nationalists holds a banner depicting Metropolitan Onufry, head of the Ukrainian Orthodox Church of the Moscow Patriarchate.   © Reuters

Moscow State Linguistic University professor Roman Silantyev told Russia's Interfax news agency that the church is taking on a major missionary challenge in Asia, given the diversity of the region and its Orthodox communities.

"Parishes in the exarchate differ," Silantyev said. "There are multinational communities with a dominating Russian presence and mononational communities. For example, the majority of our parishioners in the Philippines are local residents."

On the other hand, he stressed that the Russian Orthodox Church is not new to the region. It has been developing its Asian mission for centuries and achieved good results, he said.

Putin himself laid the foundation stone of the Church of the Dormition of the Virgin in Singapore, in a solemn ceremony last November. The church will be built on the grounds of the Russian Cultural Center.

Russian Foreign Minister Sergei Lavrov said, "The construction of a Russian cultural-religious complex in Singapore will give a great boost" to humanitarian relations among the peoples.