Agreement bolsters Delhi's position in Kashmir against Islamabad and Beijing A Rafale fighter jet of the Indian Air Force is inspected during a ceremony at an Indian air base on Sept. 10.   © Reuters
ADNAN AAMIR, Contributing writerNovember 2, 2020 16:21 JST | Pakistan
CopyCopied

KARACHI -- Pakistan is alarmed by the U.S.-India intelligence pact signed during a visit by Secretary of State Mike Pompeo and Defense Secretary Mark Esper to India last week. The agreement could give India an advantage in any future conflict over Kashmir, a region both Delhi and Islamabad claim.

"Pakistan has been consistently highlighting the threats posed to strategic stability in South Asia as a result of the provision of advanced military hardware, technologies and knowledge to India," read the statement issued by the Foreign Office of Pakistan immediately after the signing of the agreement.

The statement further said that India's acquisition of armaments and expansion of nuclear forces have serious repercussions for peace and stability in South Asia.

Under the pact, the U.S. will share with India advanced satellite and topographical data for long-range navigation and missile targeting. BECA will give India's armed forces access to a wealth of data from U.S. military satellites. Defense cooperation between New Delhi and Washington has increased. The U.S. is the second-largest exporter of military equipment to India since 2000.

"Pakistan has to be vigilant on this development [because] it has implications for the [China-Pakistan Economic Corridor] and regional security," Anwaar ul Haq Kakar, a member of the Foreign Affairs Committee of Senate of Pakistan told Nikkei Asia.

Kakar added that this step will further cause the regional balance of power to shift, pushing Pakistan toward China.

Michael Kugelman, deputy director of the Asia Program at Wilson Center, said a major advantage for India will be in the country's ability to identify targets. "The BECA can help India avoid what happened after the Balakot strike, when there were considerable doubts as to whether India actually hit the [intended] target," he told Nikkei.

Last February, India carried out an airstrike over Pakistan's Balakot region in Khyber Pakhtunkhwa Province following a militant attack on a convoy in India-administered Kashmir. New Delhi claimed the strike hit a terrorist camp, while eyewitnesses said the bombs missed their target and fell in an unpopulated area.

Kugelman added that the main purpose of the BECA for India is to track Chinese land forces on the border and naval movements at sea. "Given the zero-sum lens through which the India-Pakistan rivalry is often perceived by both sides, many in Islamabad will believe that Pakistan's security interests are now undercut." 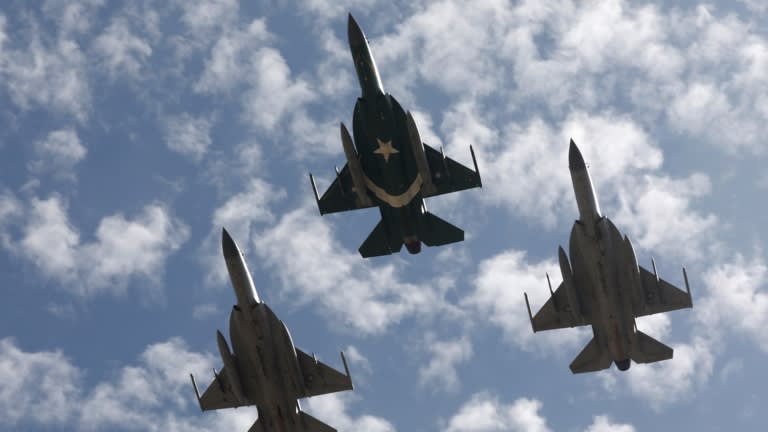 Some factions in the Pakistani government fear that India -- equipped with intelligence from the BECA -- threatens the security of the Kashmir-Gilgit-Baltistan region now under Islamabad's control. This region is where Beijing's Belt and Road corridor enters Pakistan from China's Xinjiang Province.

Some, however, do not believe the agreement will pose an immediate security threat to Pakistan or China.

"[Even] equipped with American intelligence under the BECA, I doubt that India would move on Pakistan, let alone the militarily powerful China," said James M. Dorsey, senior fellow at the S. Rajaratnam School of International Studies at Singapore. "In case if there is a conflict between India and Pakistan in the future, then it will definitely impact CPEC projects," he told Nikkei. "However, I doubt that America will take sides in such a conflict and it will try to de-escalate the tensions instead."

Kugelman says there have been a lot of threats from New Delhi, but he thinks they are more talk than anything else.

During the Kargil War of 1999 between India and Pakistan, New Delhi asked the U.S. for satellite data to pinpoint Pakistani military locations. But Washington refused, prompting India to develop its own satellite system.

Experts believe this time is different. "The U.S.-India relationship was in a much different place during the Kargil War than it is now," Kugelman said. "There was not as much trust, there had not been much strengthening of security ties, and there were no defense agreements in place that allowed for the type of sensitive intelligence sharing that [the two countries] have today,"

Chinese media is also unconvinced that the BECA poses any serious threats to China. The government mouthpiece Global Times wrote that "India's defense system lags behind that of China's in many aspects, which cannot be made up by the BECA alone."

The Global Times continued: "Similar military cooperation between India and the U.S. occurred after the 1962 China-India War, but it did not play a significant role for China, which at that time was relatively economically and militarily struggling, never mind the advanced China of today."

The BECA was signed just a week before the U.S. presidential election. This has resulted in speculation about its fate if Democratic presidential candidate and former Vice President Joe Biden is elected to the White House.

However, not a few observers believe that Washington's Indo-Pacific strategy will remain unchanged. "Indo-U.S. relations will remain strategic irrespective of who wins the elections, hence it's likely that the BECA is here to stay," claimed Dorsey.