ISLAMABAD -- Chinese investments in Pakistan are coming under scrutiny before incoming Prime Minister Imran Khan decides how to save the nation from a balance of payments crisis.

With its foreign currency reserves running dry, Pakistan needs urgent financial help. Khan has to choose between assistance from China and a bailout from the International Monetary Fund.

The IMF would likely demand full disclosure on foreign currency payments, especially from China, which has repeatedly provided loans to keep Pakistan's creditors at bay.

Khan has pledged to provide greater clarity on Beijing's planned investments in the $62 billion China-Pakistan Economic Corridor, or CPEC. Asad Umar, the incoming finance minister, said this week that contract details of investments should have been revealed in parliament, while adding there is "no question of going back and reopening" Pakistan's commitments to Chinese investors.

Pakistan's foreign currency reserves have halved over the past 20 months, with Chinese lending and devaluations of the rupee keeping the nation afloat. At around $10 billion, the country's reserves are barely enough to finance two months of imports.

The U.S. has weighed in, with Secretary of State Mike Pompeo warning that any IMF bailout should not include funds to pay off Chinese loans. Pakistani officials rejected his comments, saying they were driven by current U.S.-China tensions and Washington's apparent determination to corner Beijing on the economic front.

Meanwhile, Pakistan plans to borrow more than $4 billion from the Saudi-backed Islamic Development Bank, and the nation is expected to accept after Khan takes over as prime minister in the next few days. 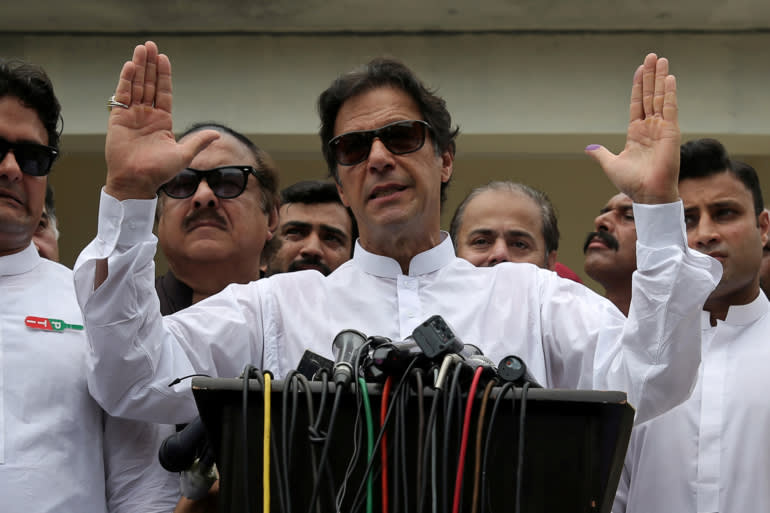 Officials are warning that Pakistan must move quickly to improve the transparency of Chinese investments before Islamabad formally reaches out to the IMF.

Hafeez Pasha, a former finance minister, told the Nikkei Asian Review that Pakistan will find itself in a bind between likely commitments of secrecy on the contracts to China and the IMF demanding full disclosure on expected foreign currency payments.

"If we have agreed to secrecy with the Chinese, then we can't reveal this information" to the IMF, Pasha said. "The IMF will want to know the complete picture. You can't hide things from your banker, especially when you need the money."

A senior Pakistani government official said China may be more willing to publicly share information on some CPEC contracts.

"We have to recognize that in China, too, there's a push to stamp out corruption," the official told Nikkei on condition of anonymity. "I cannot imagine Chinese officials being unwilling to share at least some of the knowledge as long as it doesn't harm the interests of either country."

In the financial year that ended in June, China lent at least $5 billion to Pakistan to boost the country's foreign currency reserves, according to a senior official at Pakistan's central bank.

"The Chinese have a deep-rooted relationship with Pakistan" the official said, requesting not to be identified. "I think they will keep on helping Pakistan to bridge the gap."

In Karachi, a southern port city and Pakistan's de facto commercial capital, some business leaders believe China will continue to assist Pakistan in gradually building up its foreign reserves, obviating the need for IMF help.

"They will want to avoid Pakistan's return to the IMF because that will mean the disclosure of lots of financial details related to these projects," one Pakistani businessman who regularly travels to China said on condition of anonymity. "China will not allow an IMF program to lead to such disclosures which can then be exploited by the US and others to undermined Chinese investments."