KARACHI -- Pakistan's overseas laborers are paying the price for one of their government's foreign policy decisions now that the United Arab Emirates has banned them from receiving work visas. Islamabad lost favor with Gulf states after it tried to align itself with a Turkey-Iran-Malaysia bloc challenging Saudi Arabia's leadership of the Muslim world.

The UAE last month temporarily banned the citizens of 13 Muslim majority countries, including Pakistan, from receiving work and visit visas. At the time, it was speculated that the ban was a measure to help prevent the coronavirus's spread.

Per WHO, Pakistan had 1,813 COVID-19 cases per 1 million people at the end of November. In India, the number was 6,883. Still, Pakistanis, not Indians, were barred from receiving UAE visas. Local reports have since put the ban down to unspecified security concerns.

About 1.3 million laborers from Pakistan have found jobs in the UAE during the past five years. In October, a month before the visa ban, Pakistan received of $2.28 billion in remittances from its overseas workers, $504 million of which came from the UAE, the second-largest source, after Saudi Arabia.

The visa refusals will keep precious foreign remittances from flowing into Pakistan's struggling economy. But the ban packs something of a double blow: To the dismay of Islamabad, the UAE jobs Pakistanis used to fill are now going to the citizens of archrival India. 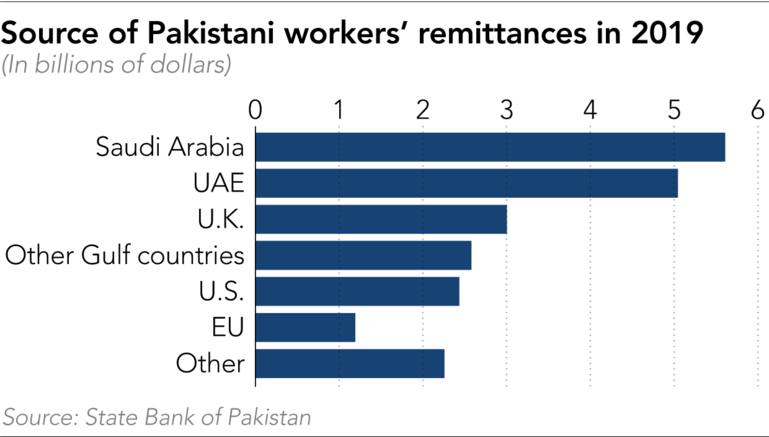 According to a local media report, a recruitment agency in Rawalpindi, Pakistan's fourth-largest city, in Punjab Province, has experienced a flight of 3,000 UAE openings to India.

James M. Dorsey, a senior fellow at the S. Rajaratnam School of International Studies at Singapore, says the UAE has recently liberalized its visa regime to attract highly skilled expatriates. Therefore, political factors cannot be ruled out in Abu Dhabi's decision to ban Pakistanis from receiving visas. "If UAE is preferring Indian labor over Pakistani," he told Nikkei, "then it's due to the importance of India for UAE."

Malik Siraj Akbar, a South Asia analyst based in Washington, believes that despite a weak and dependent economy, Pakistan maintains an assertive foreign policy which often ends up irking more economically powerful countries. "If a foreign policy stance hurts a country's economy and ends up annoying one or two countries," Akbar told Nikkei, "then it is simply flawed and needs to be reviewed."

Experts link the UAE's decision to Pakistan's alignment with Turkey, Iran and Malaysia. Last December, these countries held the Kuala Lumpur Summit to challenge the Saudi-dominated Organization of Islamic Cooperation, or OIC. Pakistan backed out of the summit at the last moment when Saudi Arabia reportedly threatened it with economic sanctions. An OIC ministerial meeting in Jeddah, Saudi Arabia, on Feb. 3. Islamabad has chosen to side with a rival camp.   © Getty Images

But eight months later, Pakistani Foreign Minister Shah Mehmood Qureshi criticized the OIC for not taking a firm stance against India on the Kashmir issue. Consequently, Saudi Arabia demanded Pakistan repay $3 billion that the kingdom had lent it earlier in 2019 for balance of payments support. Experts see the UAE's visa decision as a continuation of the Gulf state's diplomatic hostility toward Pakistan.

The S. Rajaratnam School's Dorsey says Islamabad's alignment with Turkey is linked to the growing popularity of Turkey in Pakistan. "Turkey is more vocal on Kashmir, as opposed to Gulf states, and it's natural that Pakistan will align itself with Turkey rather than UAE or Saudi Arabia," he said.

"Pakistan has gained a lot of confidence in the realm of foreign policy since the announcement of the China-Pakistan Economic Corridor," said Akbar, referring to a key part of Chinese President Xi Jinping's flagship Belt and Road megaproject. He added that with nearly unlimited and unconditional support from Beijing, Islamabad now has the backbone to take a stronger stance toward the Middle East.

Hasaan Khawar, a retired civil servant and currently a public policy analyst based in Islamabad, says the Abraham Accords, a U.S.-brokered agreement between the UAE and Israel to normalize relations, could be at the root of Abu Dhabi refusing to issue visas to Pakistani laborers.

"Security has been cited as the key reason for this ban," he told Nikkei, "which is highly likely given that [the] UAE has recently entered into [the] Abraham Accords."