Singapore's Lee fears having to choose between US and China 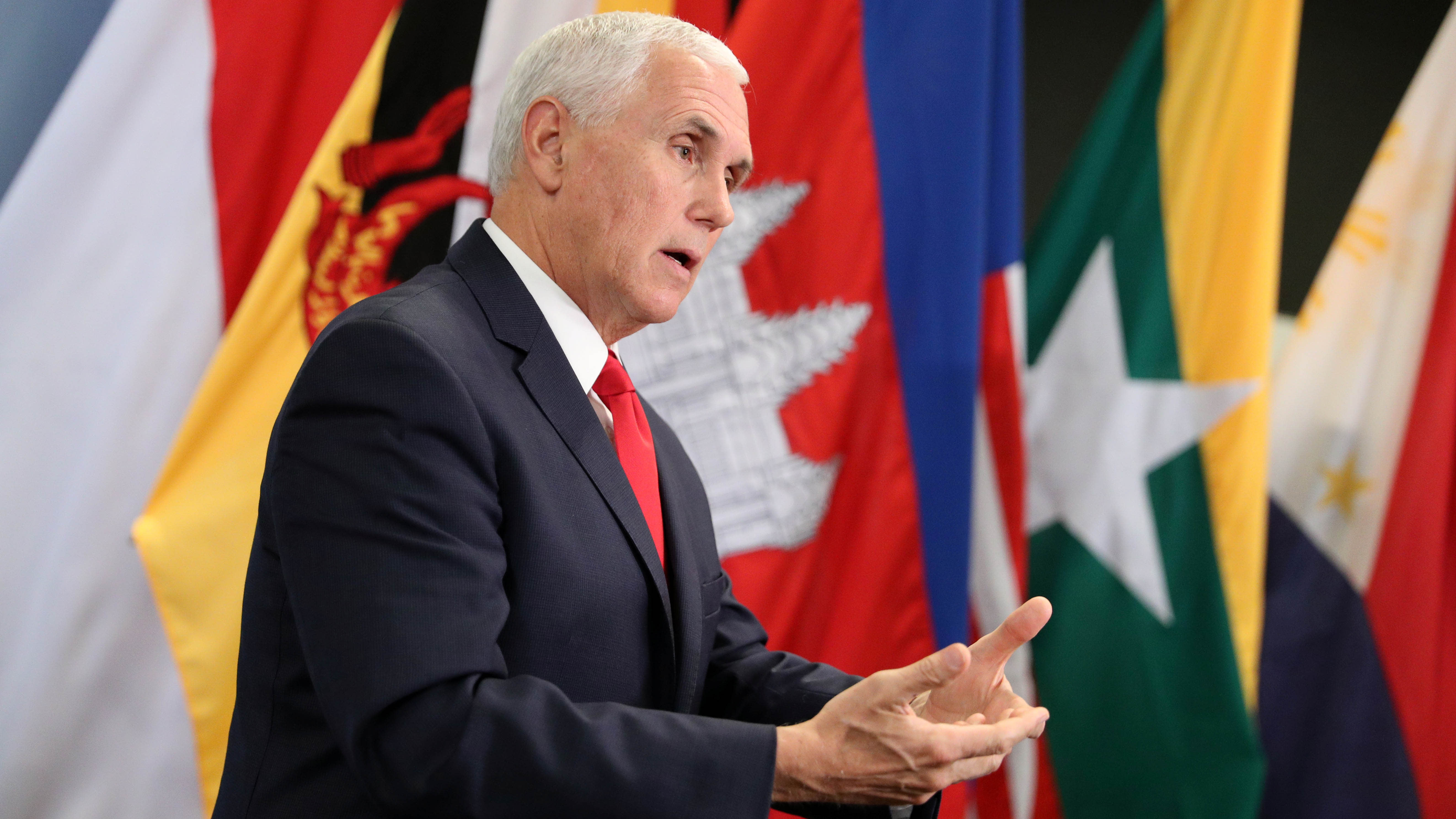 SINGAPORE -- U.S. Vice President Mike Pence on Thursday used particularly harsh language to censure China's expansive reach in Asia during a meeting with regional leaders in Singapore as part of a trip aimed at strengthening America's commitment to the Indo-Pacific area.

"We seek an Indo-Pacific in which all nations, large and small, can prosper and thrive -- secure in sovereignty, confident in our values, and growing stronger together," Pence said on Thursday morning at the summit between the 10 nations of the Association of Southeast Asian Nations and the U.S. "We all agree that empire and aggression have no place in the Indo-Pacific."

"Our vision for the Indo-Pacific excludes no nation. It only requires that every nation treat their neighbors with respect; they respect the sovereignty of our nations and the international rules of order," Pence added.

Later in the day, Pence and Chinese Premier Li Keqiang talked briefly after a group summit photo session, with Li walking out of his way to start the conversation. What they talked about was not disclosed, but both leaders looked grim after their minute-long chat.

Southeast Asia finds itself caught in the tension between the two powers.

"It is very desirable for us not to have to take sides, but the circumstances may come when ASEAN may have to choose one or the other," Singapore Prime Minister Lee Hsien Loong told reporters. "I hope it does not happen soon." During a plenary session, Li reiterated China's stance that the conflict over the South China Sea should be resolved between countries involved, without intervention by others, according to sources.

Pence, who was the last speaker at the summit, separately said: "Militarization is illegal." A source who was in the meeting said this statement surprised attendees. But no one responded to Pence's remarks.

Malaysian Prime Minister Mahathir Mohamad also told reporters that the U.S.-China trade war was discussed in the East Asia Summit, during which Singapore's Lee said the clash was unproductive.

Mahathir added: "[China's Li] mentioned they have problem because they are at the receiving end. It is not their idea to have a trade war."

A key mission for Pence on this trip -- which will later be extended to Papua New Guinea -- is to play up Washington's efforts to boost infrastructure investment in the region at a time when China is doing the same with its Belt and Road Initiative.

Pence earlier said U.S. commitment to the Indo-Pacific region "has never been stronger" in comments to reporters en route to Japan, the first of four countries he is visiting.

In his address at the Asia-Pacific Economic Cooperation summit this coming weekend in Papua New Guinea, Pence is expected to highlight a plan to promote what Washington calls high-quality, transparent infrastructure development in Asia -- words aimed at drawing a contrast with China's Belt and Road Initiative.

According to a Thursday report by Hong Kong media outlet South China Morning Post, which cited a senior U.S. official, the American plan would stand in contrast to the "dangerous debt diplomacy China has been engaging in the region."

The U.S. is increasingly on the offense against China. Pence's particularly strong words in an early-October speech drew attention globally, with some observers warning that a new cold war is about to start.

"We will not be intimidated, and we will not stand down," Pence said in his speech to Washington-based Hudson Institute think tank, as he condemned China's militarization in South China Sea. Pence criticized Beijing for the near-collision between American and Chinese ships in the disputed South China Sea in September.

"Beijing is employing a 'whole-of-government' approach, using political, economic and military tools, as well as propaganda, to advance its influence and benefit its interests in the United States," Pence said in October. He also accused China of stealing intellectual property, trying to interfere in American politics, and suppressing human rights in its own country.

Calling the meeting on Wednesday a "turning point," Li promised Canberra wider access to the Chinese consumer market and urged Canberra to provide a "fair and nondiscriminatory business environment" for Chinese investors.

That relationship cooled last year after Canberra stepped up scrutiny of Chinese investment in Australia, especially on the purchase of assets.

With Singapore, Li witnessed the signing of a deal on Monday, upgrade to the 2009 bilateral free trade agreement, with both sides expressing hopes to expand trade and investment, including a new land-sea transport corridor linking China and Southeast Asia.

"China is willing to strengthen communication and coordination with the Singaporean side, deepen mutually beneficial cooperation, and continuously bring bilateral ties to higher levels," Li said.