US worried about expiry of South Korea-Japan intelligence pact 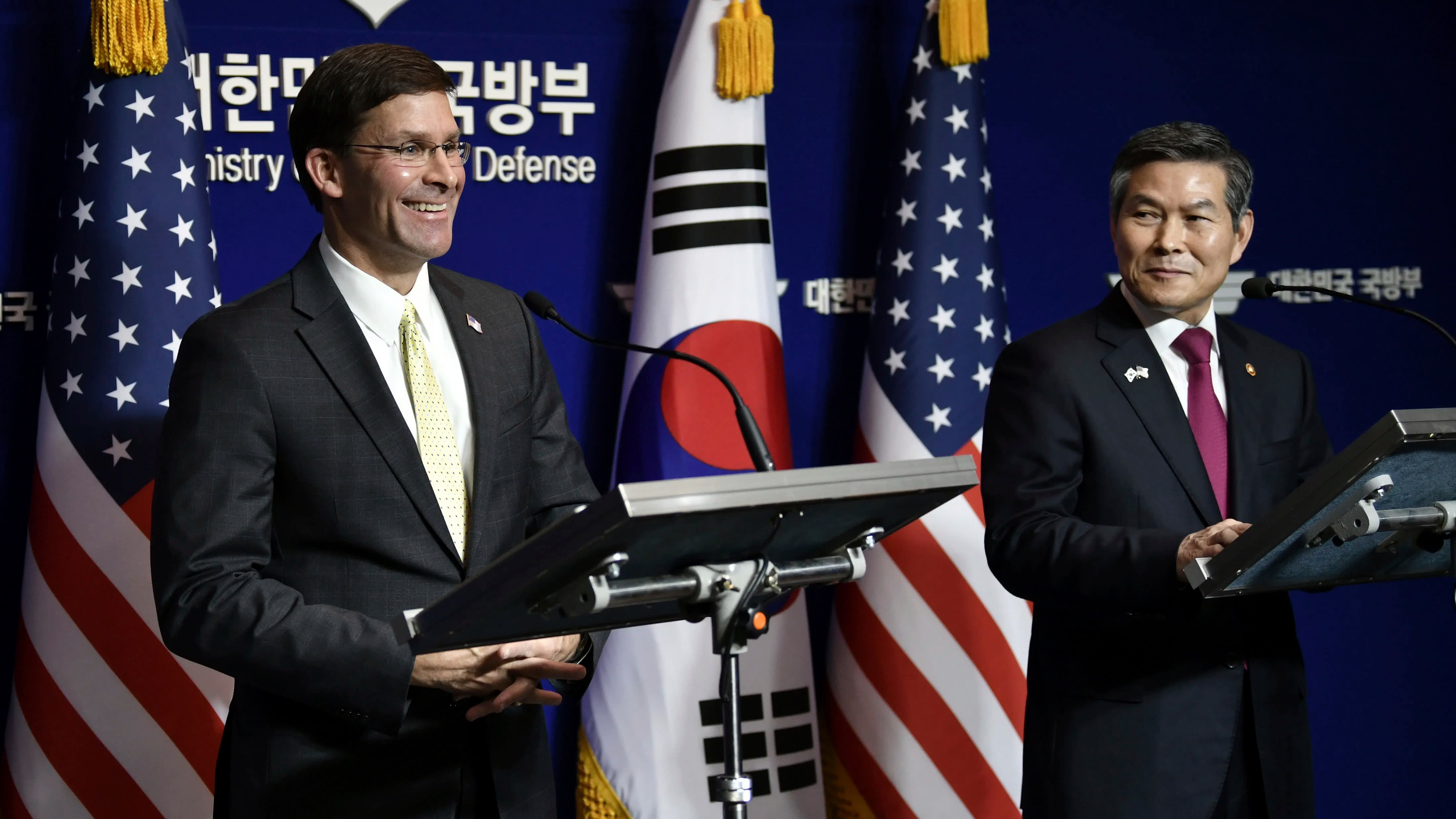 SEOUL (Reuters) -- U.S. Secretary of Defense Mark Esper pressed South Korea on Friday to pay more for the cost of stationing U.S. troops in the country and to maintain an intelligence-sharing pact with its other Asian ally, Japan, that Seoul is about to let lapse.

Speaking after a high-level defence policy meeting with his South Korean counterpart, Jeong Kyeong-doo, Esper also said the two countries must be flexible with their joint military drills to back diplomatic efforts to end North Korea's nuclear programme.

But he stopped short of announcing any new reduction in military exercises that North Korea has sharply condemned.

North Korea said on Thursday it had turned down a U.S. offer for new talks ahead of a year-end deadline Pyongyang has set for Washington to show more flexibility in negotiations.

As uncertainty hangs over the troubled peace push, the United States and South Korea are simultaneously scrambling to clinch an agreement in the coming weeks to cover next year's costs of maintaining a 28,500-strong U.S. military presence aimed at deterring North Korea.

South Korea, Esper said, "is a wealthy country and could and should pay more" for the U.S. military deployment.

"It is crucial that we conclude the (defence pact) ... with increased burden-sharing by the Republic of Korea before the end of the year," Esper told a news conference.

Jeong said he and Esper shared the view that the cost-sharing pact being negotiated should be fair and mutually agreeable, but it was unclear if they shared any sense of what a fair amount might be.

A South Korean lawmaker said last week that U.S. officials had demanded up to $5 billion a year, more than five times what Seoul agreed to pay this year under a one-year deal.

U.S. President Donald Trump has rattled South Korea with his insistence it take on a greater contribution for the deterrence against North Korea.

North Korea said in a commentary from state media KCNA on Friday that the U.S. demand for a greater South Korean contribution to defence costs was an attempt to "exploit" and tighten its control over South Korea.

The South Korean Foreign Ministry announced another round of defence cost talks would be held on Nov. 18-19 in Seoul.

After his talks with Jeong, Esper warned that South Korea's decision to end an intelligence-sharing pact with Japan, called GSOMIA, would impact military readiness - presumably by slowing the ability of the U.S. allies to directly share information about North Korean military activity.

"The only ones who benefit from expiration of GSOMIA and continued friction between Seoul and Tokyo are Pyongyang and Beijing," Esper said.

General Mark Milley, chairman of the U.S. Joint Chiefs of Staff (JCS), hosted a video teleconference from Seoul on Friday with his South Korean and Japanese counterparts, during which South Korea's Park Han-ki stressed the importance of trilateral cooperation, its JCS said.

Jeong said both South Korea and Japan would make efforts to narrow differences before the pact expires on Nov. 23. But there was no sign of an imminent breakthrough.

During a meeting with Esper and Milley later on Friday, South Korean President Moon Jae-in said it was difficult to share intelligence with Japan which raised security concerns in restricting exports, though he acknowledged the need for three-way cooperation, Moon's spokeswoman told a briefing.

Esper said he would also ask Japan to make efforts for an amicable resolution of the issue.