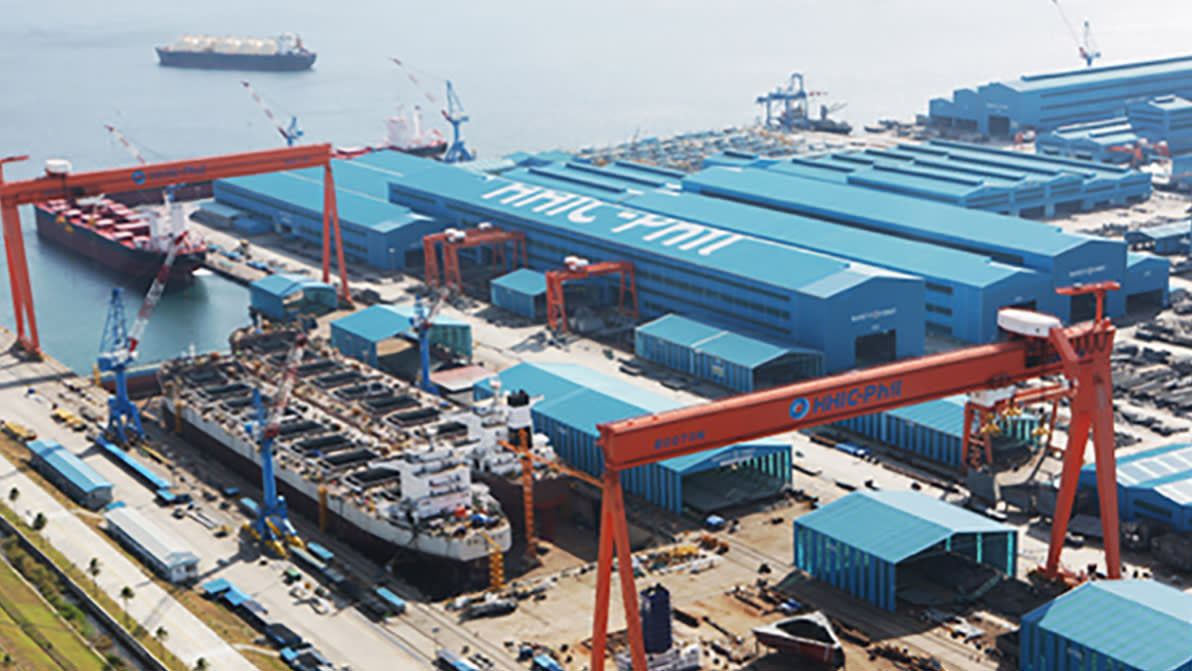 MANILA -- The Philippine Navy is preparing to take over part of the Hanjin shipyard at Subic Bay to help extend a lifeline to the stricken port and ensure it is kept out of Chinese hands.

The move follows Philippine President Rodrigo Duterte's order in May to the Department of National Defense and the Philippine Navy to study options "for the takeover of Hanjin shipyard," according to a document seen by the Nikkei Asian Review.

Navy spokesman Captain Jonathan Zata confirmed that studies are being conducted. As an initial step, the navy has stationed a ship at the Hanjin yard early this month, he said on July 19.

Situated at the entrance to the highly sensitive South China Sea on the archipelago's main island of Luzon, Philippine Navy chief Robert Empedrad is planning to visit Subic Bay later this month for a site inspection, Zata said. The navy is planning to use the space for ship docking and repairs, and will allow commercial shipbuilding operations to continue amid ongoing efforts to find a buyer.

The 300-hectare shipyard collapsed in January after Hanjin Heavy Industries and Construction's Philippine subsidiary defaulted on $1.3 billion in loans.

Duterte also approved the recommendation by the defense department to approve areas surrounding the yard as "military reservation areas for future expansion of the shipyard," according to a separate document reviewed by Nikkei.

"The government is very serious about the navy having a presence there to the point that there's now a concept which we are preparing to execute," Zata said, adding that the plan has been coordinated with Hanjin and its creditors. Hanjin officials could not immediately be reached for comment.

While several foreign bidders have declared their interest in acquiring the facility, bids from two Chinese companies triggered the Philippine Navy's move to take a direct stake in the former U.S. naval base.

"The Philippine Navy's presence is a signal to revive the strategic role of the bay," said Rajeev Ranjan Chaturvedy, a visiting fellow at the S. Rajaratnam School of International Studies in Singapore.

With U.S. interests also believed to be considering a joint rescue bid for the shipyard, Chaturvedy said that would "be a clear signal of U.S. commitment to the region from rhetoric to reality," adding that the "U.S. and its partners have clear strategic interest in reviving the yard."

One government source told Nikkei that the U.S. bid could be joined by companies from Japan and Australia.

"Add India, and it would be like the Quad," the source said, referring to the Quadrilateral Security Dialogue between the U.S., Japan, Australia and India revived by U.S. President Donald Trump to counter China's growing dominance in the region.

Stretching from China in the north to Indonesia in the south, the South China Sea carries about one-third of global shipping each year worth an estimated $3.37 trillion.

But China's claims to more than 80% of the waterway, which it has bolstered with a chain of ports, runways and military installations on seven artificial islands, has angered countries including the Philippines and Vietnam which share overlapping claims to the area.

After being sworn in as president in 2016, Duterte set aside the South China Sea dispute, forging closer ties with Beijing that has resulted in investment pledges worth tens of billions of dollars from Chinese companies in the Philippines.

The Philippine Department of Trade and Industry, which has received several expressions of interest from state-backed Chinese investors, has also expressed concerns about a possible Chinese bid for the port.

"The issue of national security and sovereignty takes precedence over anything else," a senior trade official said in April.

Navy Chief Empedrad said in February that the navy wanted a stake or "at least a space" in the yard, and preferred U.S. and South Korean shipbuilders as potential corporate saviors.

Jomi Deveras, a senior vice president at Rizal Commercial Banking, one of the local creditors, told reporters last month that all investors, regardless of their nationality, were welcome, but that the ultimate decision over the shipyard's future rested with the government.

"We are approaching this as a commercial transaction but because there are geopolitical angles to consider, the government has a final say on who they will agree with the banks' transfer of shipyard," Deveras said.

Hanjin has invested $2.3 billion in the 300-hectare facility since 2006, making it the largest foreign investor in the Subic Bay Metropolitan Authority, a special economic zone.

The shipyard delivered 123 vessels through 2018, making the Philippines one of the world's largest shipbuilding nations, employing over 30,000 workers during its heyday before cutting staff to just a few hundred maintenance workers when it closed in February.