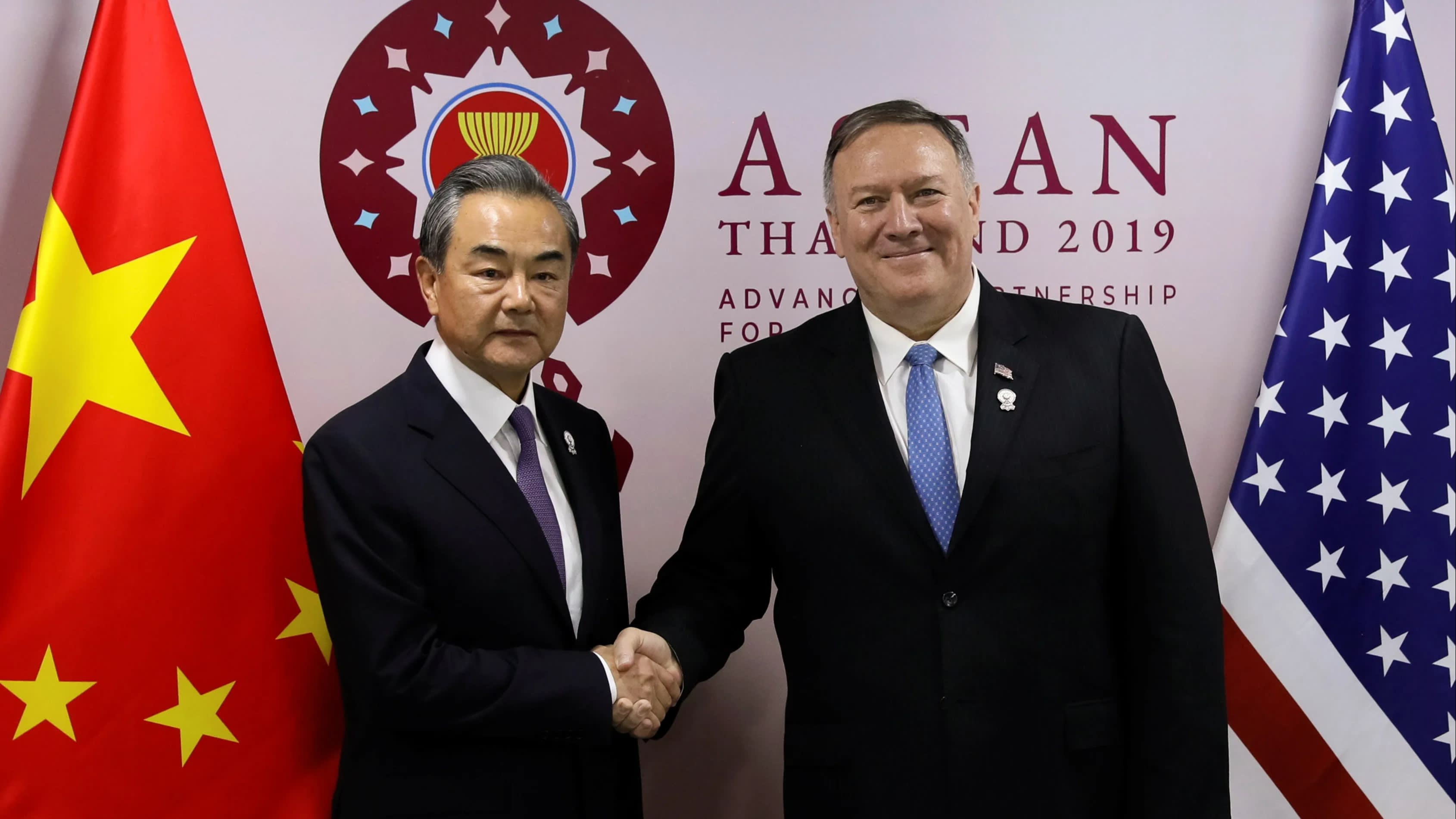 BANGKOK (Reuters) -- U.S. Secretary of State Mike Pompeo on Thursday criticised China's actions in Asia after meeting his Chinese counterpart for the first time this year amid political tension between the two countries.

Pompeo spoke out against Chinese "coercion" of Southeast Asian neighbours in disputes over the South China Sea and its dam-building on the Mekong River.

His comments highlighted the U.S. divide with China at a meeting in Bangkok of the Association of Southeast Asian Nations (ASEAN).

"We are working with them on many fronts," Pompeo said.

"But we are also very candid about the places we are hoping China will behave in ways that they are not behaving today and we talked about each of those as well."

Earlier, Wang had struck a more conciliatory tone, saying he and Pompeo had discussed ways to promote China-U.S. ties.

"There may be at various times issues and problems between China and the United States, but no matter how many problems, it is important for both sides to sit down and have face-to-face discussions," Wang said after the meeting of about 30 minutes.

U.S. and Chinese negotiators ended a brief round of trade talks in Shanghai on Wednesday with little sign of progress and agreed to meet again in September, prolonging an uneasy truce in a year-long trade war between the world's two largest economies.

In Bangkok, Pompeo said he had urged regional allies to speak out against Chinese coercion in the South China Sea and earlier said Chinese dam-building upstream on the Mekong River had caused decade-low water levels in the river's lower basin in Southeast Asia.

Both officials are in the Thai capital of Bangkok for security meetings with countries of the Association of Southeast Asian Nations (ASEAN) grouping, on the front line of rivalry between the United States and an increasingly muscular China.

Immediately after his meeting with Wang, Pompeo had also painted a rosier picture, saying on Twitter that he had an in-depth exchange of views with the Chinese official on U.S.-China relations, North Korea and other topics.

"When it advances U.S. interests, we are ready to cooperate with China," he said.

But in an appearance later in the day with his Thai counterpart, Pompeo returned to U.S. talking points on issues such as the plight of Rohingya refugees who have fled ASEAN member state Myanmar, and rising tension with Iran after attacks on tankers in the Strait of Hormuz.

The United States blames the tanker attacks on Iran, but it denies that.

Pompeo said he had urged allies "to maintain the sanctions that spur diplomacy with North Korea, to speak out against Chinese coercion in the South China Sea, to advocate for the voluntary safe and dignified return of the Rohingya to their homeland, and to confront Iranian aggression".

He added that the United States was ready to restart denuclearisation talks, even though North Korea test-launched a missile the previous day.

"We stand ready to continue our diplomatic conversations with the North Koreans. I regret, looks like I'm not going to have an opportunity to do that while I'm here in Bangkok. But we are ready to go," Pompeo said.