JAKARTA -- Official crackdowns on emigrants in Malaysia and Thailand have cast further doubt on over prospects that member countries of the Association of Southeast Asian Nations can finalize a long discussed deal on migrant workers' rights.

In June and July around 100,000 mostly Myanmar migrant workers fled Thailand after the military government in Bangkok announced hefty new fines for undocumented workers and their employers. Then, starting July 1, Malaysia made a series of arrests of alleged undocumented migrant workers, affecting more than 3,000 workers and around 60 employers accused of giving work to illegals.

These tough actions -- though a reprise of previous years' crackdowns -- come as the region's governments mull proposed enhancements to the 2007 ASEAN Declaration on the Protection and Promotion of the Rights of Migrant Workers, signed in Cebu in the central Philippines during one of Manila's past tenures as the group's chair.

Two years after the Cebu declaration, ASEAN countries started moves toward a set of region-wide legal norms, but progress has been slow. With Manila again chairing ASEAN this year, there has been a renewed push to address migrant rights -- an important social and political issue in the Philippines. Around 10% of the country's population has travelled overseas to find work. 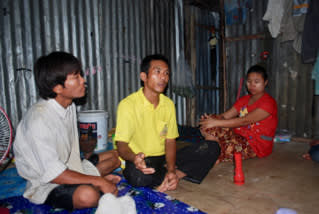 But there are disagreements between member states over whether the proposed code should be legally binding and, if so, how such a deal would work. Wealthier destination countries for migrant workers -- such as Brunei, Malaysia, Singapore and Thailand -- do not want a legally binding regional code that would entail rights for undocumented workers and their families.

However, worker-source countries such as Cambodia, Indonesia, Myanmar and the Philippines want to better enshrine protections for their expatriate workers.

"The 'divide' between sending and receiving countries is over the enforceability of the instrument's provisions were it to be legally binding, which would require domestic ratification and compliance. The sticky issues, as I understand, continue to be over the inclusion of undocumented workers and also families of migrant workers in the coverage," said Moe Thuzar, lead researcher on socio-cultural affairs at the ISEAS-Yusof Ishak Institute, a Singapore-based research organization.

The 10 ASEAN member states are collectively both a source and destination for migrant workers. Of a total population of over 620 million, more than 20 million Southeast Asians are emigrants, according to World Bank calculations published in 2015. Of the over 10.2 million migrant workers in Southeast Asia, nearly 7 million had migrated within the region.

Of the main source countries, almost 800,000 Cambodians, 1.2 million Indonesians, 900,000 Laotians, 2 million Myanmar and almost half a million Filipinos had emigrated to other Southeast Asian countries.

Malaysia, with nearly 2 million migrants from within Southeast Asia, and Thailand with over 3.5 million, are the main draws. Singapore is third with almost 1.3 million foreign-born workers from around the region.

Many of these figures under-represent the reality, given that undocumented migration is significant. This is one of the issues that the proposed ASEAN deal would address. A street lined with Myanmar restaurants and shops in downtown Kuala Lumpur, a major destination for overseas Myanmar (Photo by Simon Roughneen)

The most vulnerable have sometimes had their passports or other identification documents confiscated by employers, in turn leaving them vulnerable to crackdowns such as those in Malaysia and Thailand.

"Sometimes they lose their documents because their boss, or the recruitment agency hijack the documents," said Daniel Awigra, ASEAN advocacy program manager at the Jakarta-based Human Rights Working Group.

Host countries such as Malaysia and Thailand also feature significant emigration, with just over 1 million Malaysians and 200,000 Thais living elsewhere in the region -- a fifth of the total of around 1 million Thais who work overseas.

The demographics of migration within the bloc reflect its wide economic disparities. Singapore's gross domestic product per capita was $52,961 in 2016 -- the ninth-highest in the world and the highest in ASEAN, according to International Monetary Fund figures. Brunei's per capita GDP was second on $26,424, with Malaysia next on just under $10,000.

Much lower are countries such as Cambodia on $1,230, the Philippines on $2,924, and Indonesia on $3,604. Thailand, mostly a receiver country, had 2016 GDP per capita of just under $6,000. This is low compared with Malaysia and Singapore but enough to make the country an attractive proposition for migrants from Cambodia and Myanmar, the latter with a GDP per head of $1,275, according to the World Bank.

Singapore and Thailand need migrant labor in sectors where their own nationals are reluctant to work -- such as domestic service and fisheries -- and people working in those sectors would benefit most from a region-wide code.

"Migrant workers and nationals are generally not treated differently under the labor and employment laws and regulations. However, migrants are often filling jobs that locals do not want and which nationals find low-paying or unattractive. Some of these, like in domestic work, mainly done by women, [and] agriculture and fishing are not afforded some or much of the protections of the labor law. Domestic workers for example are amongst the lowest paid, coupled with long hours, as they are not covered by minimum wage provisions," said Nilim Baruah, senior migration specialist at the International Labor Organization.

Recent years have seen harrowing revelations of abuse of migrant workers in Thailand's massive fishing industry, where many have been kept at sea as slaves for years at a time, while Singapore's courts sometimes deal with domestic helpers' allegations of abuse against homeowners.

But migrants are vital to host country economies. In the recent Malaysian crackdown, construction companies have complained to local media that they have been left short-staffed as foreign workers avoid showing up for work, fearing arrest.

Of the estimated 4 million migrant workers in Malaysia, around half are thought to be working illegally, with Myanmar and Indonesian migrants making up a significant proportion.

Such numbers, along with the accounts of abuse, and a lack of oversight of the networks of brokers, recruiters and traffickers profiting from migration in the region, all suggest a pressing need for an ASEAN deal on the issue rather than the current set of bilateral arrangements between various states. Service with a smile at Myanmar restaurant in Kuala Lumpur, where staff and customers are mostly Myanmar emigrants (Photo by Simon Roughneen)

While receiver countries have an economic interest in cheap migrant labor, source countries also benefit. During Myanmar's five decades of military rule, emigration meant that millions of young people, who otherwise might have stayed to become disaffected by a lack of local job opportunities, left for neighboring Malaysia and Thailand.

Myanmar's economic growth since 2011 has spurred hopes that the country can facilitate job creation at home and curb emigration -- a less attractive option now given the crackdowns overseas.

"The 'pull' factor that drew Burmese people outside Myanmar's borders has likewise diminished. Thailand is a most uncertain place these days, while closing borders broadly does not augur well," said Sean Turnell, an economic advisor to the Myanmar government.

The Philippines has facilitated emigration as a means not only of helping surplus labor find employment, but as a supplement to the domestic economy. Huge remittances -- equal to 10.2% of Philippine GDP in 2015 according to the World Bank -- have long been sent back to the country by overseas Filipino workers, or OFWs.

In 2016 remittances to the Philippines amounted to almost $27 billion, according to the country's central bank. Most of the money came from Filipinos working outside ASEAN, with only Singapore appearing on the central bank's listing of the top 10 source countries for remittances in 2016.

Manila is nonetheless keen to sort out a deal ahead of the mid-November ASEAN summit, which will mark the conclusion of its chairmanship.

But after the failure to agree terms at the ASEAN summit held in April, the Philippines has come around to the idea of a non-enforceable code, in the hopes of marking the upcoming summit with a deal. "I think the Philippines, as ASEAN chair presiding over ASEAN's 50th anniversary, would like to push for the regional instrument's adoption under their watch," said Thuzar.

"[The] Philippines as chair wants a feel good photo op," said Sinapan Samydorai, an advocate for migrant worker rights and director of Southeast Asian affairs at Think Center, a NGO in Singapore.

However Indonesia, by far the biggest country and economy in ASEAN, is holding out for a more robust deal that would help the 1.2 million Indonesians working mostly in Malaysia and Singapore.

"The lack of coordinated action among ASEAN governments to protect human rights in the context of migration is contributing to this problem and giving free rein to employers, recruitment agents, and authorities to abuse migrant workers," said Eva Kusuma Sundari, an Indonesian MP, in a recent statement by ASEAN Parliamentarians for Human Rights, a non-government group.