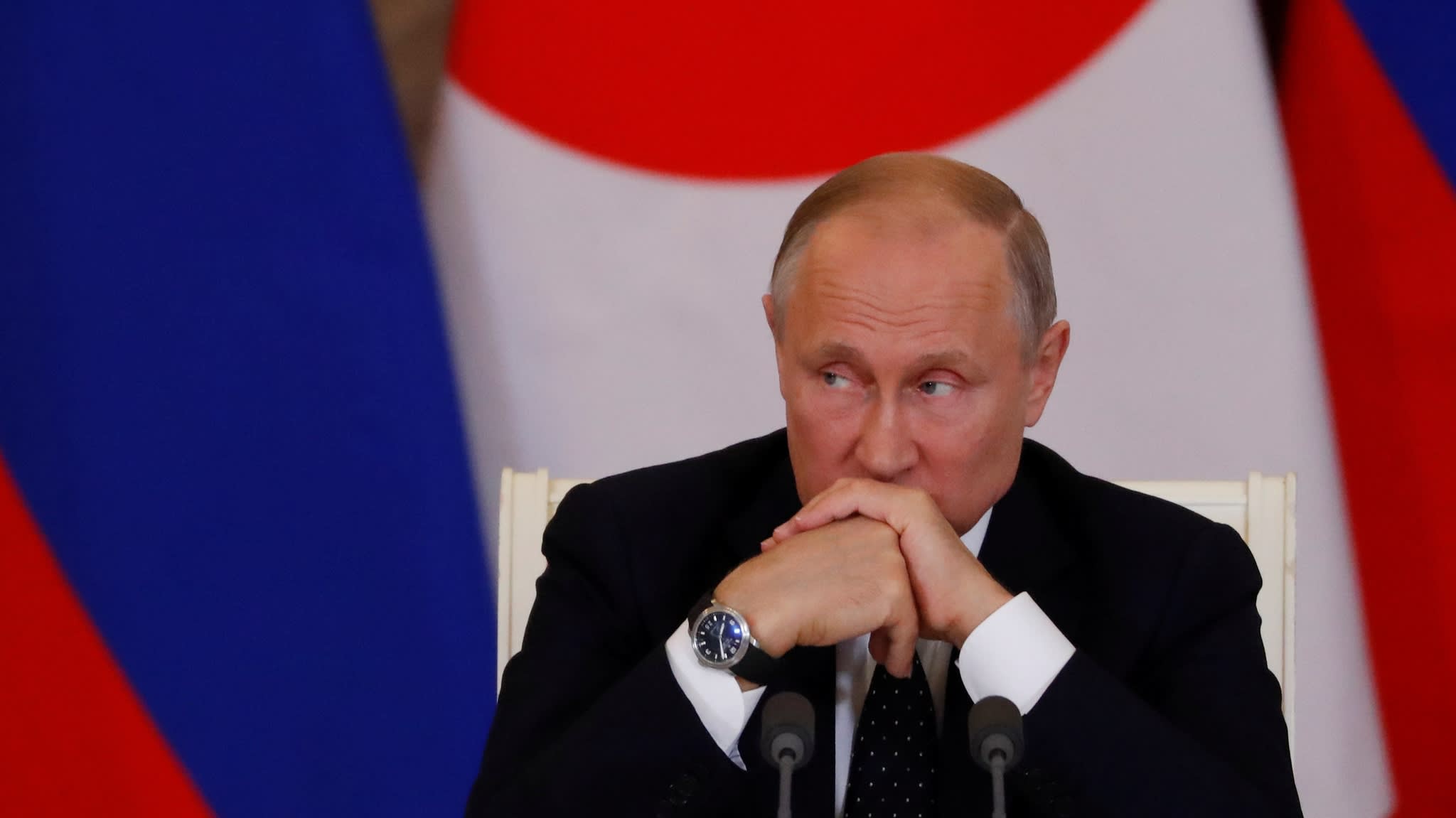 Russian President Vladimir Putin offered to sign a peace treaty with Japan "with no preliminary conditions" by the end of 2018.   © Reuters

VLADIVOSTOK, Russia -- Russian President Vladimir Putin's offer Wednesday to sign a peace agreement with Japan this year has left Tokyo wondering what will become of efforts to resolve their territorial dispute over a chain of Pacific islands.

"Let's sign a peace agreement -- not now, but before the end of the year, without any preliminary conditions," Putin said during a plenary session at the Eastern Economic Forum in the Russian city of Vladivostok.

"We will continue to address all controversial issues as friends based on the peace treaty," he added. "It seems to me that it would help us solve all the problems that we failed to solve for 70 years."

Also on the stage was Japanese Prime Minister Shinzo Abe and Chinese President Xi Jinping. Other world leaders were present at the event as well.

Putin said that he thought of the proposal "right now and right here," and insisted he was not joking. Abe did not directly respond to the offer at the forum, saying only that a further dialogue between the leaders would lessen hostilities and skepticism.

Moscow and Tokyo have never signed a peace treaty following World War II, in large part due to their dispute over a chain of islands administered by Russia as the Southern Kurils and called the Northern Territories by Japan.

Wednesday was the first time Putin mentioned a specific timeline for the accord. But the implication that he wants to put the territorial dispute on the back burner until after they sign the treaty is raising concerns in Tokyo. It could also affect Abe's hopes of leveraging their personal rapport into progress on the islands.

During a Wednesday news conference in Japan, Chief Cabinet Secretary Yoshihide Suga reported that no such proposal came up when Abe met Putin on Monday. "Japan's stance -- that we first resolve the Northern Territories dispute, then sign a peace agreement -- has not changed," said Suga, essentially dismissing Putin's invitation.

On Thursday, Abe weighed in. "It is necessary to develop the understanding of Japanese and Russian people and improve the environment to settle these issues," he said. The remark came during a meeting with executives of Japanese companies. It suggests Japan's prime minister prefers to take his time on the issue, rather than bow to Putin's quick fix.

"Putin made the offer knowing full well what Japan's position is," observed a Japanese senior government official. The official believes Putin was trying to throw Abe off balance, saying there are no plans to clarify Russia's intentions or to offer counterarguments.

But ​​​​​​others in the Japanese government were not surprised. Putin has indicated before that he wants peace negotiations to be based on the joint declaration issued by Japan and the Soviet Union in 1956. In that statement, which re-established bilateral diplomatic ties, Moscow agreed to return some of the disputed islands once the two sides signed a peace treaty. But Japan insists it take control of all the islands in question.