'Good luck with that,' expert says of Canberra's push for alternative to China 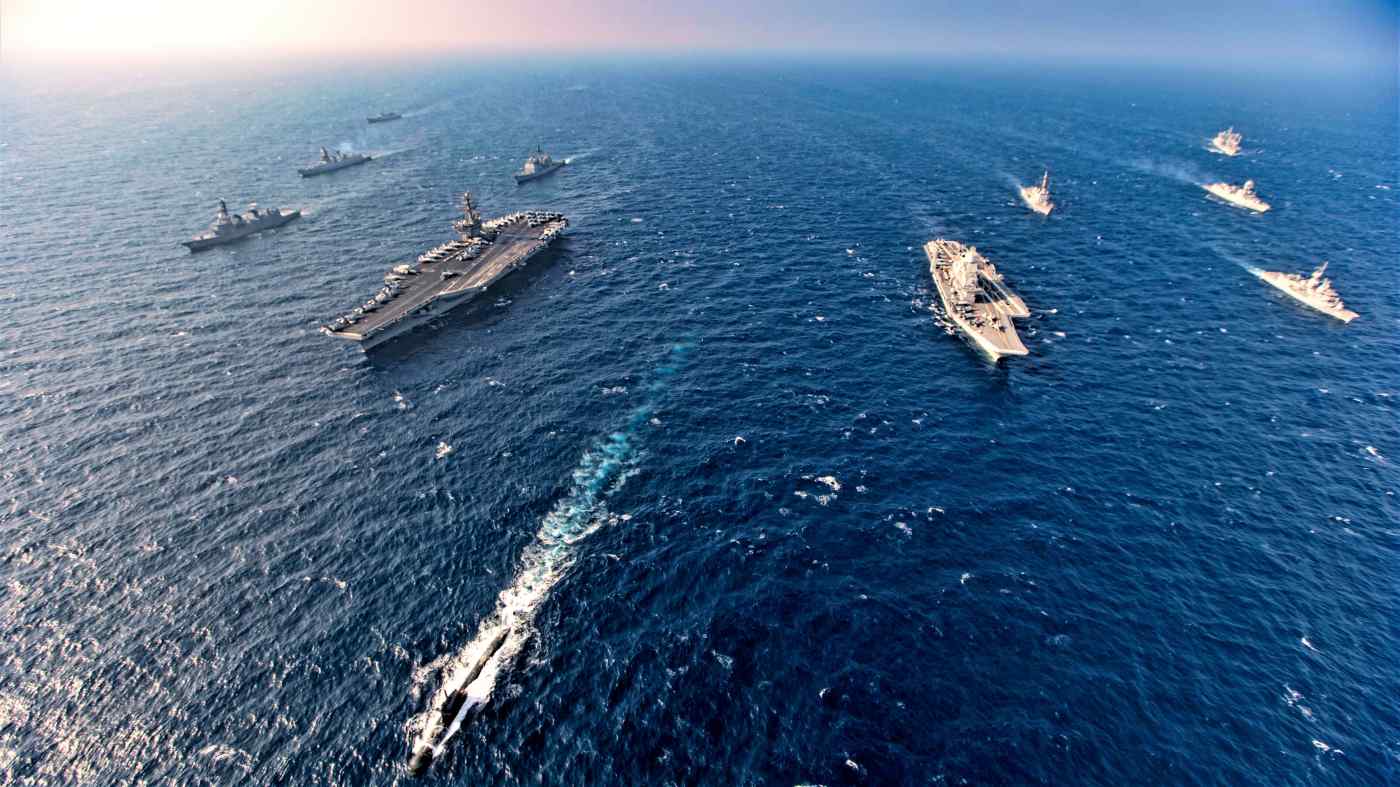 SYDNEY -- The navies of the U.S., Japan, India and Australia are converging for drills on Thursday, in another step toward cementing their Quadrilateral Security Dialogue alliance.

Recent overtures from Canberra to New Delhi about also deepening trade and economic ties, however, may prove more complicated than the coordinated military maneuvers. Some experts say the future of economic cooperation could have implications for the Quad's credibility.

Australia is taking part in the Malabar naval exercise for the second straight year, after India invited the country back following an absence of more than a decade. Running until Sunday in the seas near Guam, according to India's Ministry of Defense, the live-fire and anti-submarine drills will put warships, reconnaissance aircraft and other weaponry through their paces.

"The exercise will provide an opportunity for common-minded navies to enhance interoperability, gain from best practices and develop a common understanding of procedures for maritime security operations," the Indian ministry said in a news release. "The conduct of these exercises despite COVID restrictions is a testimony of synergy between the participating navies and commitment to safer seas."

Australia's naval chief, Vice Adm. Michael Noonan, issued a statement saying, "We regularly work with India, Japan and the United States to build our professional relationships and strengthen the foundations for an open, inclusive and resilient Indo-Pacific."

While the drills and the Quad alliance are not explicitly aimed at any particular country, many -- China included -- see them as an effort to contain Beijing.

Australia is also focused on pushing back against what it considers China's "weaponization" of trade, by shoring up economic ties with democracies. Earlier this month, Australia made it clear that it sees Quad partner India as the answer.

Tony Abbott, Australia's prime minister from 2013 to 2015, went to India in the hope of jump-starting talks on a free trade agreement he first proposed in 2014. The visit came after a year in which China slapped tariffs and import restrictions on a host of Australian products, after Prime Minister Scott Morrison called for an independent inquiry into the origins of COVID-19.

Abbott emphasized supply chain security. "The pandemic has put up in flashing neon lights the extent to which the world has become dependent on Chinese imports, including in critical supply chains, that can be turned on and off like a tap," he wrote in The Australian newspaper under the headline "India the sensible substitute for belligerent Beijing." "The answer to almost every question about China is India," Abbott said. "Because trade deals are about politics as much as economics, a swift deal between India and Australia would be an important sign of the democratic world's tilt away from China, as well as boosting the long-term prosperity of both our countries."

Abbott added that as a democracy, as the world's No. 2 producer of steel and pharmaceuticals, and with its own answer to Silicon Valley, "India is perfectly placed to substitute for China in global supply chains."

Indian Trade Minister Piyush Goyal was quoted by local financial media Mint last week as expressing interest in an "early harvest" arrangement with Australia -- a precursor to an FTA. Noting Abbott's visit, he told export promotion councils, "I urge all of you to quickly assess which are the areas where we can finalize the early harvest with Australia, what are the areas of your interest, what are the areas where you can let go a little bit, and on a give and take basis, we can then close the Australian engagement."

But Kanti Bajpai, an Asian studies professor and director of the National University of Singapore's Center on Asia and Globalization, is deeply doubtful that Australia can seal a comprehensive free trade deal with India, no matter how well Morrison and counterpart Narendra Modi get along.

"Good luck with that, Australia," Bajpai said. "Which is the last country that actually successfully managed to get a trade deal with the Indians for any reason? The Americans apparently almost had one under Trump, but not quite. The Indians think the Americans weren't quite there. But we've been negotiating with the European Union for 15 years or so, and that hasn't worked. We just walked out of the Regional Comprehensive Economic Partnership, the RCEP."

He went on to list several factors behind Indian resistance. "It may be in some part domestic lobbies. But it's also a bit of a cultural, political culture problem there, a mindset that foreigners are going to finagle you in a trade deal, something going back to colonialism. The Brits came as innocent traders, and then they took over the whole country, by God."

The bottom line is that "India just doesn't do trade deals," he argued.

Some in India think it should do more of them.

After India opted out of RCEP -- signed late last year as the world's largest free trade pact, including the 10 Association of Southeast Asian Nations members alongside Australia, China, Japan, South Korea and New Zealand -- Pant suggested partners perceive it as a challenging country to cooperate with. "Indian policymakers should take this seriously and move ahead with FTAs despite the fact that the political economy of free trade agreements is very complicated and very difficult for [them]," he said.

He added, "I think Tony Abbot is rightly pointing out that unless there is this momentum on the economic side and ... India, Australia and Japan take the bull by the horns, I don't think we are going to see a shift away from China."

Nevertheless, while India may be difficult to persuade, China is clearly undaunted.

The Global Times, a Chinese Communist Party newspaper, wrote earlier this month that trade tensions made Australia's interest in India "understandable" but that "there is no need for politicians to exaggerate the impact of a potential deal as code for displacing China."

The paper also expressed skepticism of India's readiness to shore up supply chains. "While some Western media outlets have long hyped up India's economic potential, which was said to help the so-called 'democratic world' to cut their economic reliance on China, it is not hard to see that India's chance of replacing China's role in the global industrial chain remains small."

Either way, Bajpai remains pessimistic about Australian efforts to nudge Modi to wind back protectionist policies. The author of the new book "India vs China: Why They Are Not Friends" speculated that the Indian prime minister believes he has done Canberra enough favors.

Modi "would really have to think that the relationship with Australia was so important that he'd be willing to reverse that trend, and it's difficult to know exactly why, particularly because he's got the Indo-Pacific and the Quad going with Australia," Bajpai said.

He said India's invitations to Australia for the Malabar drills amount to a "bilateral kind of security defense agreement."

"I just have a feeling that the Indians think they've done quite a bit for Australia already."