Quad to tackle 'most important issues of our time,' Blinken says in India

Jaishankar joins US in affirming call for stable, sovereign Afghanistan 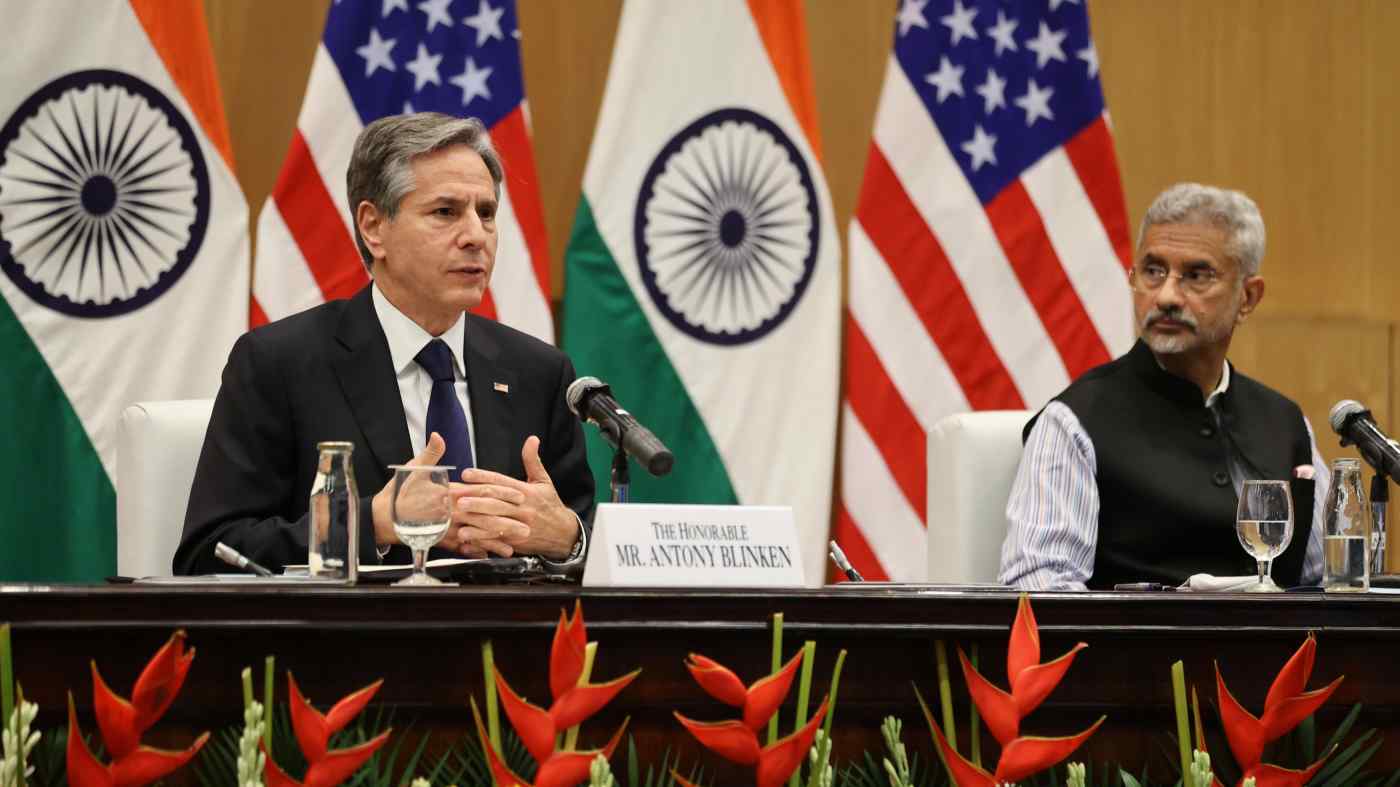 NEW DELHI -- The tense situation in Afghanistan and cooperation among Quad nations to ensure peace and security in the Indo-Pacific region topped the agenda for the talks between U.S. Secretary of State Antony Blinken and Indian External Affairs Minister Subrahmanyam Jaishankar in New Delhi on Wednesday.

Blinken, who arrived in India on Tuesday on his first visit since joining the Biden administration earlier this year, said both India and the U.S. are committed to the proposition that there is no military solution to the conflict in Afghanistan.

"There has to be a peaceful resolution which requires the Taliban and the Afghan government to come to the table," he said in response to a question from the media after his meeting with Jaishankar, favoring an Afghan-led, Afghan-owned peace process.

"Even as we withdraw our forces from Afghanistan ... we remain very much engaged in Afghanistan," Blinken said. "We have not only a strong embassy there, but also important programs that continue to support Afghanistan economically ... and we are very much engaged in the diplomacy of working to bring the parties together at the table for the peaceful resolution of the conflict."

His remarks come as the Taliban continue to make territorial gains in Afghanistan ahead of the complete withdrawal of U.S. forces from the war-torn country by the end of August.

Jaishankar too mentioned Afghanistan and said it is essential that peace negotiations are taken seriously by all parties. "The world wishes to see an independent, sovereign, democratic and stable Afghanistan, at peace with itself and with its neighbors," he said.

"Unilateral imposition of will by any party will obviously not be democratic and can never lead to stability, nor indeed can such efforts ever acquire legitimacy," he added,

Apart from Afghanistan, their meeting focused on issues such as expanding vaccine production to make it globally affordable and accessible, and cooperation in the Indo-Pacific region.

To a question on Chinese criticism of Quad, Blinken said the four like-minded nations of India, the U.S., Japan and Australia have come together "to work collectively on some of the most important issues of our time" and that they are working to ensure a free and open Indo-Pacific region, and peace, security and prosperity for people in that region. "What the Quad is not is a military alliance," he added.

During their meeting, Jaishankar also said peace and prosperity in the region "is as important for both of us as democratic stability in Afghanistan."

"Deepening the Quad as a collaborative platform is in our mutual interest, and we must work together even more closely on key contemporary challenges like terrorism, climate change, pandemics and resilient supply chains," he added.

The coronavirus pandemic -- which has hit the two countries hard -- was also on the top of the agenda of their talks. Blinken announced $25 million in fresh funding to support vaccination efforts in India, which he said will contribute to saving lives by strengthening vaccine supply chain logistics, addressing vaccine hesitancy and helping train health care workers.

The two sides, he added, are determined to end the pandemic and will work together in this regard, including through the Quad's vaccine partnership, which will bring safe and effective vaccines to others across the region. The partnership was announced in March during the Quad leaders' virtual summit.

Earlier in the day, Blinken shared on Twitter photos from his early morning meeting with civil society leaders, including a Tibetan monk -- reportedly a representative of the Dalai Lama, the Tibetan spiritual leader who lives in exile in India.

The move is expected to irk Beijing, which calls Tibet a part of China and has branded Dalai Lama a separatist.

"I was pleased to meet civil society leaders today. The U.S. and India share a commitment to democratic values; this is part of the bedrock of our relationship and reflective of India's pluralistic society and history of harmony. Civil society helps advance these values," Blinken said in his post.

His was the third high-level visit to India from the U.S. since the Biden administration took charge in January. Defense Secretary Lloyd Austin visited India in March, followed by the April trip of John Kerry, the special envoy on climate change.

Blinken also held talks with India's national security adviser, Ajit Doval, and was scheduled to call on Prime Minister Narendra Modi before wrapping up his India visit, the first leg of a two-nation tour that will also take him to Kuwait.