The 10 members of the Association of Southeast Asian Nations plus six other Asia-Pacific economies have given themselves until the end of the year to "substantially complete" the Regional Comprehensive Economic Partnership.    © Reuters
MAYUKO TANI, Nikkei staff writerNovember 10, 2018 16:51 JST | ASEAN
CopyCopied

SINGAPORE -- Negotiations toward the world's largest trade bloc could take a big step next week during an ASEAN summit and related meetings, where U.S.-China tensions will lurk as a subplot.

The 10 members of the Association of Southeast Asian Nations plus six other Asia-Pacific economies have given themselves until the end of the year for "substantially conclusion" of the Regional Comprehensive Economic Partnership. And next week's meetings are expected to show how serious the partners are about reaching the goal.

Singaporean Prime Minister Lee Hsien Loong, who will chair the summit, has repeatedly expressed a sense of urgency. Time is running out, and wide gaps remain, one between India and China and another between RCEP's developed nations and their developing partners, sources said.

RCEP would harness about 50% of the world's population and 30% of the globe's gross domestic product in a bloc that would wield tremendous economic and political clout. For trade-oriented ASEAN countries, a deal would bring a significant economic windfall. Among all 16 partners, success would be a powerful message to an international community that has come under the specter of protectionism.

But there is a question of how much political will really exists among the 16 leaders and their negotiating teams.

The RCEP countries' economic ministers are to meet on Monday, and the meeting may spill over to the next day. On Wednesday, a RCEP summit will take place. Even if the group manages to reach its substantial conclusion goal, the 16 partners would have to continue talks toward a final deal into next year. 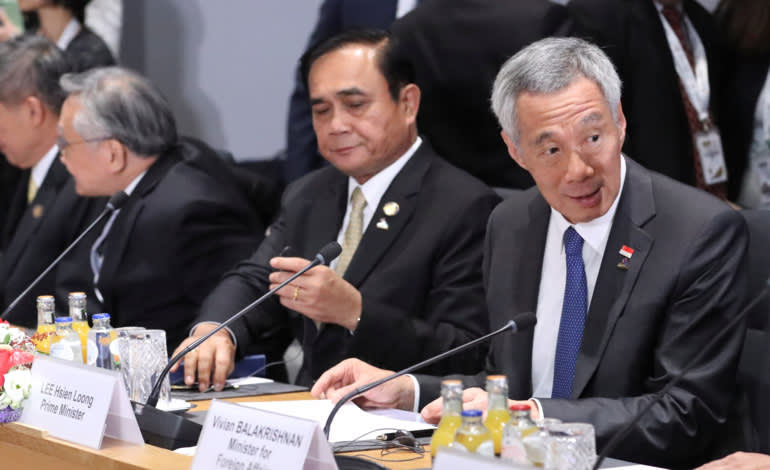 The ASEAN summit will also take place on Tuesday, in the evening. Meetings with trade partners such as China, the U.S. and India will go on from Wednesday to Thursday. Vice President Mike Pence is to represent the U.S. as President Donald Trump is skipping the event.

The world will be watching for something else during the meetings -- indications as to how ASEAN plans to maneuver between the U.S. and China as the superpowers fight their tariff war. "It is a very, very hot topic," a senior diplomat in the region said.

U.S.-China tensions could impact crucial nontrade issues, such as territorial disputes in the South China Sea. For years now, China has been building artificial islets in the shallow body of water. More recently, it has been constructing military installations on the outposts.

Lately, though, Beijing has been softening its approach toward ASEAN, a likely effect of its hegemonic competition with the U.S.

"The trade war has changed China's calculations over how to see the world," said Tang Siew Mun, who heads the ASEAN Studies Centre at the ISEAS-Yusof Ishak Institute in Singapore. "It was a wake-up call."

It could also spell opportunity for China. "Watch whether China tries to limit U.S. positions or its ability to operate [freedom of navigation missions] in the South China Sea," said Chong Ja Ian, an associate professor of political science at the National University of Singapore. Also watch, he said, "whether the U.S. pushes back, or whether the U.S. initiates anything and China pushes back."

Now that the U.S. has completed its midterm elections, in which the opposition Democratic Party gained control of one of Congress' two chambers, Chong added, "there may be reasons for the Trump administration to try to" ratchet up the tension.

ASEAN, which began in the 1960s as a political bloc to ward off the spread of communism, now finds itself caught between the world's most successful Communist-led nation and an increasingly isolationist U.S.

It has little elbow room. In October, ASEAN and the U.S. agreed to hold their first joint naval drill, in 2019. Also last month, the 10-nation group conducted a joint maritime exercise with China, off Guangdong Province. "As the commonalities and overlapping between various sides shrink," Chong said, "ASEAN's ability to be flexible also becomes more constrained."

ASEAN and China in August made progress toward establishing a dispute-management mechanism. The two sides agreed on a negotiating text that is to serve as the foundation for an eventual Code of Conduct in the South China Sea. This initial step could lead to stability in the region. "China wants to speed up" the negotiations, a source said, "as the situation in ASEAN is now favorable to China."

Despite the so-called single draft, the two sides remain far apart. One point of contention is a Chinese proposal to ban external parties from conducting maritime exercises in the region. The 10 ASEAN countries have not agreed among themselves on this point.

China also wants to include a clause to ban foreign companies from engaging in energy exploration in the region. ASEAN has nixed this proposal.

In a related matter, ASEAN leaders are bickering over whether to criticize China's militarization of the South China Sea in the post-summit Chairman's Statement. After last year's summit, chaired by Philippine President Rodrigo Duterte in Manila, the statement omitted any criticism of China.

To commemorate the 50th anniversary of ASEAN's partnership with China, Chinese Premier Li Keqiang is expected to announce some "goodies" to elevate relations, according to Tang of the ASEAN Studies Centre. "It will be interesting to see what Vice President Pence has to offer," Tang said, noting that the absence of a clear Asian strategy in the Trump administration's foreign policy has been a concern in Southeast Asia.

In between official meetings, various bilateral meetings are being set up. Malaysian Prime Minister Mahathir Mohamad will meet Singapore's Lee. The 93-year-old leader insists that Singapore is not paying enough for water it buys from Malaysia. He has also decided to freeze a joint railway project.