BANGKOK -- Leaders of Asia-Pacific nations will gather in Bangkok through Monday to finalize a historic trade pact as well as to discuss territorial disputes in the South China Sea, the denuclearization of the Korean Peninsula and other issues.

The 35th ASEAN Summit and related meetings begin on Thursday. A chairmanship handover ceremony will be held on Monday, with Vietnam taking the baton from Thailand.

The 10 ASEAN countries will be joined by China, Japan, South Korea, Australia, New Zealand, India, Russia and the U.S. The related meetings include the East Asia Summit, which involves these 18 countries.

The leaders' biggest task will be to seal the Regional Comprehensive Economic Partnership, a trade pact involving 16 of the East Asia Summit's 18 countries. The U.S. and Russia are not in the deal.

If the RCEP materializes, it would be the world's largest free trade partnership, encompassing countries with a combined population of over 3.5 billion and accounting for about a third of global gross domestic product. 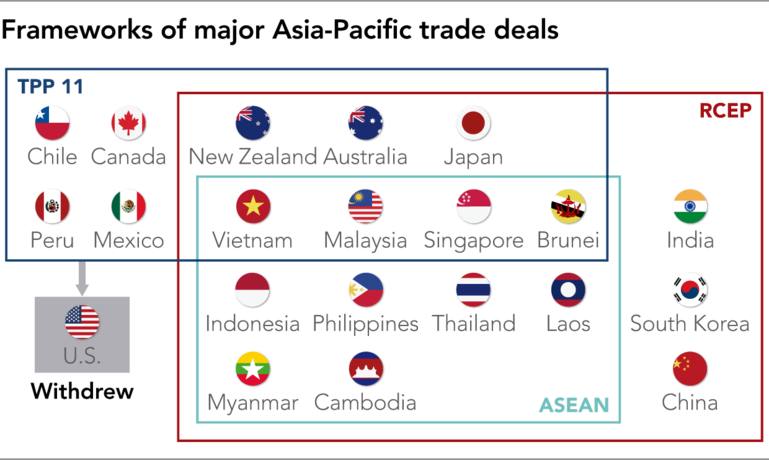 Thailand has expressed its intention to wrap up the historic deal before its ASEAN chairmanship expires at the end of the year. Some political specialists and economists see the window closing after this year as the next three ASEAN chair countries -- Vietnam, Brunei, and Cambodia -- may not have as much diplomatic strength as Thailand to complete the pact.

India holds the key. The South Asian country is maintaining its bid to win more safeguards for its products -- a stance that has irritated China. Beijing is presenting itself as a promoter of free trade and a contrast to Trump's protectionism.

Ministers and high-level officials from the participating countries have met several times to convince India to make a deal. The most recent meeting came on Oct. 11-12, but the negotiators could not close a sizable gap between the majority of the RCEP nations and India. If their negotiation results in an agreement, the deal would be signed at the RCEP Summit on Monday, which is scheduled to start at 6:15 p.m.

Regional peace is another key item on the agenda. Ongoing territorial disputes exist between China, Taiwan, Malaysia, the Philippines and Vietnam, all concerning the South China Sea. Recently, a Chinese oil survey vessel remained in Vietnamese-controlled waters for months, and the Philippines decided to beef up its maritime defense capabilities.

The chairman's statements from the ASEAN Summit in June and the East Asia Summit the previous year contained sentences recognizing concerns regarding land reclamation projects and activities in contested areas. The leaders will discuss whether to update these passages with expressions that better fit the current situation.

The leaders are also likely to keep demanding that North Korea give up its nuclear weapons, especially now that Trump and Kim Jong Un appear to have reached a stalemate.

The plight of the Rohingya and other human rights issues might also be discussed.

Many bilateral summits and negotiations will take place in Bangkok over the next several days. While some are already scheduled, others might come about at the last minute. American and Chinese officials could sit down to seek a resolution to their trade war, while Japanese and South Korean leaders might try to mend their broken relations.

Thai officials are expected to meet their American counterparts regarding duty-free privileges that the U.S. is to revoke in April.