Artisanal miners work at a copper-cobalt mine in the Democratic Republic of the Congo.   © Reuters
MASANORI TOBITA and TETSUSHI TAKAHASHI, Nikkei staff writersJune 23, 2018 16:01 JST | Africa
CopyCopied

VIENNA/BEIJING -- Rising nationalism in African nations over control of resources is starting to overshadow the efforts of Chinese and other foreign companies to develop their operations on the continent.

Some countries are demanding that foreign companies involved in mining invest in local companies, and plan to increase taxes on such foreign enterprises. These countries aim to fill their coffers by reclaiming ownership of mining concessions, anticipating a recovery in global resources prices.

On Wednesday, Chinese President Xi Jinping outlined plans for a tour of Africa in July in an apparent effort to shore up ties with various countries on the continent. The initiative comes as China's relations with the U.S. have been strained by concerns over trade and security.

But rising "resource nationalism" in Africa may impede China's diplomatic efforts to expand its influence on the continent.

In March, the Democratic Republic of Congo in central Africa introduced a law requiring foreign mining companies transfer their shares to local companies. It also called for higher taxes on foreign companies.

Congo produces about 60% of the global supply of cobalt, a rare metal in high global demand as a key material in the production of auto batteries.

China's Zijin Mining Group along with Switzerland's Glencore opposed Congo's move, and are preparing to sue the government.

Since the 1990s, China has been an active participant in the development of the mining sector in central Africa, which has rich reserves of base metals such as copper, iron ore and manganese.

Among other countries, China has had a strong presence in Zambia since acquiring an interest in copper mines in the late 1990s. Chinese influence has spread to manganese mining and other resources, and Zambia's mineral resources have been integrated into the supply chains of Chinese manufacturers. Resource nationalism is also on the rise in Zambia, which has demanded that Canadian copper mining company First Quantum Minerals pay $8 billion in accrued taxes. Some experts say Chinese companies could also face such requirements. Antipathy toward China is deep-rooted in Zambia, with accusations of abuse of workers' rights and poor environmental practices.

South Africa is also taking a more proactive approach to managing its resources. After apartheid ended in 1994, the government introduced regulations requiring local black-owned businesses take part in the development of mines. With the government mulling new regulations to raise the percentage of black ownership in mining projects, Chinese companies may find their roles diminished.

South Africa is rich in resources, with the world's largest platinum reserves and deposits of gold, manganese, iron ore, coal, chrome and zinc. Chinese state-owned steelmaker Hebei Iron & Steel, along with Anglo American and Glencore all have operations in the country. The major resources companies of China and other countries face a tighter regulatory environment.

China verges on luring all of Africa away from Taiwan

Turkey jockeys with China for influence in Africa

China pulls ahead in race to secure cobalt

"A significant industry issue is resource nationalism," said Jean-Sebastien Jacques, CEO of British-Australian mining giant Rio Tinto, at a conference in the U.S. in May.

There are several reason why African countries are tightening controls on resources. One is the rising international prices of minerals as a result of the global economic expansion and gains in crude oil prices.

Many countries on the continent still earn foreign currency mainly by exporting primary resources, and see an opportunity for increased revenues as mineral prices rise. 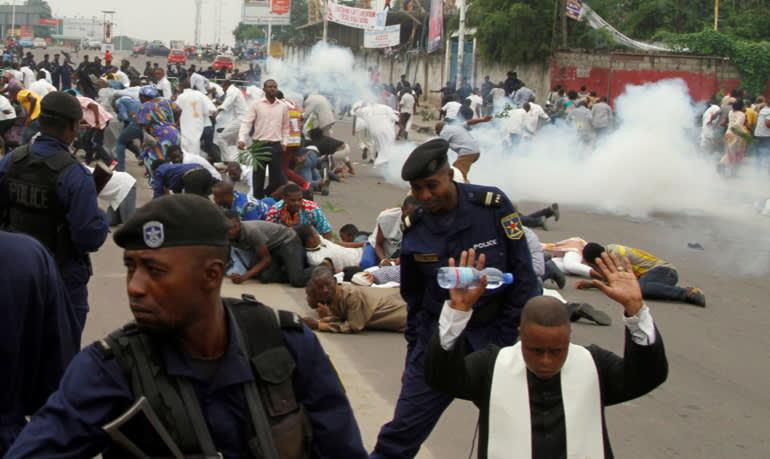 Riot policemen fire tear gas to disperse demonstrators during a protest against President Joseph Kabila in the Democratic Republic of Congo in January.   © Reuters

Such is the case with Congo President Joseph Kabila, who faces calls from citizens to step down, having remained in office after his term ended. By taking a hard line toward foreign interests, Kabila seeks to keep power by garnering popular support.

Yet China will continue to be a major investor in Africa for the foreseeable future, as the continent's rich resources are essential to sustaining the growth of the world's second-largest economy.

Some of China's efforts to increase its influence in Africa come in the form of expanded support in connection with the Belt and Road Initiative to build infrastructure and transport links to Central Asia, Europe and beyond.

But if Africa's rising resource nationalism puts China in a disadvantagous position, it may start reconsidering its program of economic assistance to the region.