Rise of China not yet challenging 'American century' 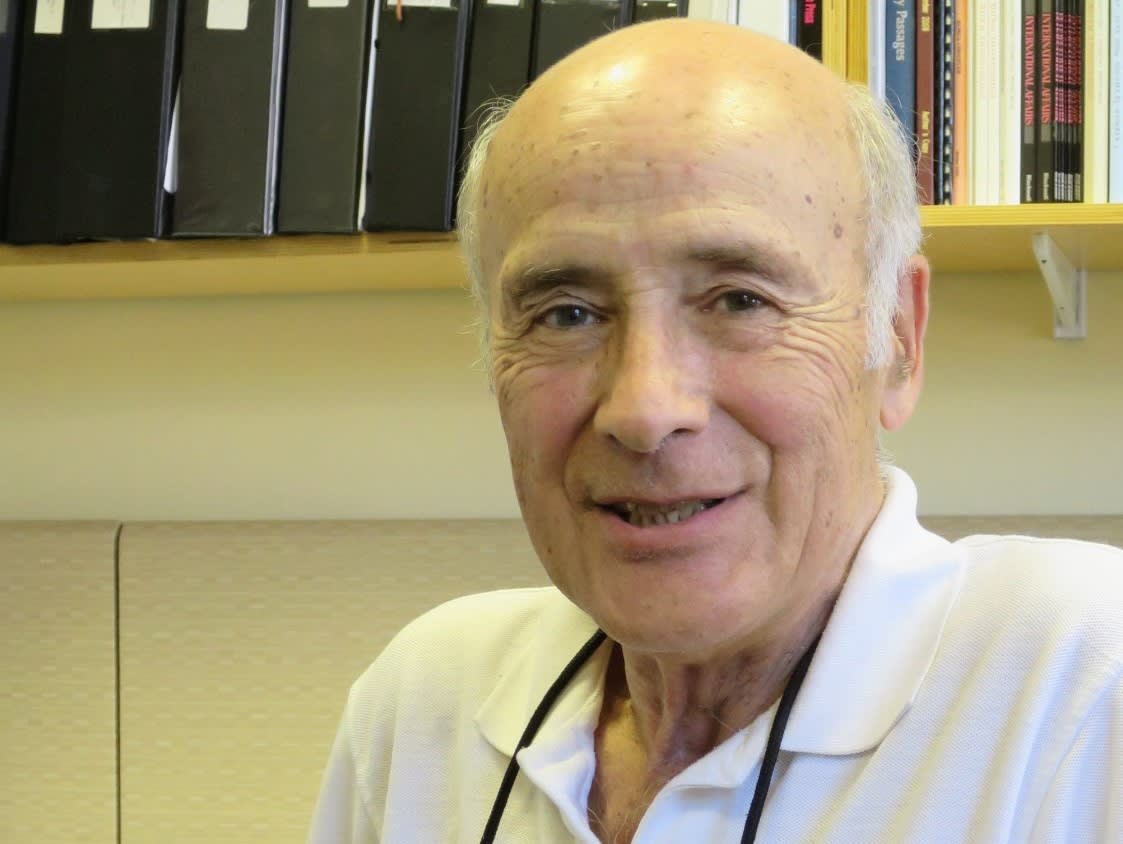 WASHINGTON -- This year marks the 70th anniversary of the end of World War II. In an interview with The Nikkei, Joseph Nye, a former U.S. assistant secretary of defense and chairman of the U.S. National Intelligence Council, and now a professor at Harvard University, argued that, in spite of China's rise, the American century, which started after the war, has not ended.

Q: What is the most important trend or change in the world since the end of WWII?

A: From the point of view of the U.S., WWII was a turning point, in which the Americans became the leading power in the global balance of power. After World War I, the U.S. was the most powerful country but it turned inward, toward isolationism, so what I call the American century really began after WWII.

From the point of view of Japan, the most striking thing is that Japan has had 70 years of peace, and during that time it has produced the world's third-largest economy and a functioning democracy where you have realistic political change. This is an extraordinary change from the Japan of the 1930's, which was wracked by war and an authoritarian state. So I would say those are the two changes for our two countries since 1945. And, of course, the most important is that instead of being enemies, we're close allies.

Q: After the Cold War ended in 1989, people believed the U.S. would rule the world as the only superpower. But it seems to be losing its status since the Afghan and Iraq wars and the financial crisis.

A: There was always an exaggeration of how much power the Americans had, because during the Cold War the U.S. was balanced by the Soviet Union, and that balance ended in the period after 1991, when the USSR collapsed. But it didn't really mean that the Americans would rule the world. There was the rise of other new powers, and the diffusion of economic activity, so even though the Americans were the most powerful, it was not a world the Americans could completely control.

Some of the things that were written about unipolarity and the "world's only superpower" in that period were somewhat exaggerated. The U.S.'s success in the first Gulf War was important but it's worth remembering that the defeat of Saddam Hussein's invasion of Kuwait did not mean that the U.S. was able to rule Iraq, and President (George H. W.) Bush wisely decided not to try. The rise of a non-state actor, al Qaeda, which led to the attacks of 9/11, also indicates that there's a difference between being the most powerful state and being able to control the world.

Q: How do you expect the future position of the U.S.?

A: The American century is not over; the U.S. will still be the leading country; America is not in decline. But you have the rise of a number of other countries, whether it be China, India, Brazil and others, and that means that there's a diffusion of power to more states and also to non-state actors. But if you ask which state will have the most power, I think it will be the U.S., not China.

The U.S. is less powerful than, let's say, 25 years ago, and I call that "the rise of the rest." But if you ask, "Is there any one state which will replace the U.S., for example, China?" I think the answer to that is no.

A: Well, it's not quite the same as "G0." What it means is that the U.S. has to work with a number of countries to be able to accomplish its goals. Those include China, Japan and Europe. It can't solve these problems working alone.

I wrote a book in 2002 called, "The Paradox of American Power," and the subtitle is, "Why the World's Only Superpower Can't Go It Alone." That was a time when everybody said the Americans were able to rule the world. I said at that time, no. It's more complicated than that.

Q: As you said, the presence of China is growing rapidly, so how should the U.S. cooperate with China?

A: The U.S. wants to stay open to China, to invite China to participate in the international system, but also to have an insurance policy against China becoming something of a bully. And in that sense, the policy that the U.S. designed in the 1990s under the Clinton Administration was what we called "Integrate but Hedge."

So we opened the door to China to join the World Trade Organization, but at the same time we reaffirmed the U.S.-Japan security treaty as a way to hedge against China becoming a bully. So that meant the U.S. and Japan working together trying to shape the environment in which China had an incentive to behave well.

Q: The Obama administration is frustrated with China's reclamation activities in the South China Sea.

A: That's true. China has been taking positions in the East China Sea and the South China Sea which we think are inconsistent with the international law of the sea.

I don't think it's right for China to declare an air defense identification zone over the East China Sea, and the U.S. flew military planes through that air defense zone to prove that we didn't accept that.

And similarly, China has never clarified what it means by the nine-dash lines (which China uses to demarcate its claims). It says it does not cut off freedom of navigation in the South China Sea but if it were to take the rocks and atolls on which it's piling sand and claim that it has the rights to their exclusive economic zones, that would curtail a great deal of navigation. So to make the point that we don't agree with that, we've flown surveillance planes right alongside these areas where China is piling sand on rocks. So yes, that shows a certain amount of frustration.

On the other hand, I don't think it's going to lead to a conflict or war because the U.S. has said it doesn't take a position on the sovereignty of the islands because it takes a position on the freedom of navigation under the Law of the Sea treaty. And since China says that it agrees with the treaty, it should be the basis on which we can negotiate a reasonable settlement.

Q: Some people said we are entering a new Cold War with Russia. Do you agree?

A: I don't think it's completely a Cold War, but it is true that when Russia invaded Ukraine and thereby violated the basic laws or rules of the UN Charter, created in 1945, it was behavior that had to lead to sanctions, to show that these rules are important.

I agree that it was important to punish Russia for its behavior, but I don't think we want to totally isolate Russia. It is a country in decline, and declining countries can be very dangerous.

We want to try to work with Russia when we can. It's interesting that despite the sanctions against Russia relating to Ukraine, the Americans and Russians were able to cooperate on the recent Iran nuclear deal. Obama even praised Russia's cooperation on that deal.

Q: Do you agree with Obama's decision to go ahead with the Iran nuclear agreement and the normalization of relations with Cuba?

A: Yes, I think Obama's correct to recognize Cuba, in terms of restoring diplomatic relations because the sanctions against Cuba have been counterproductive. They did not bring down the Castro regime -- if anything, they helped to consolidate his power by isolating Cuba from the U.S.

I also think he was correct to reach the agreement with Iran with the cooperation of China, the Russians and the European countries because the alternative would have been worse. If we didn't have this agreement, which was just announced, I doubt the sanctions would have lasted.

And I think it's better to have an agreement that sets limits on Iran's nuclear program, than to allow the sanctions to erode or to use force.

Q: The most typical U.S. policy during the Cold War era was containment, but I think it would be very difficult to continue this policy with the world now connected so deeply. Is that why the Obama administration changed the policy to engagement and dialogue?

A: Well yes, although one has to realize that there are limits. For example, it's very hard to have engagement and dialogue with North Korea. And it has been difficult to do that with Iran until recently. Obama said in his inaugural address that he was willing to open his hand to anyone that opened their hand to him, but not all countries have done that.

Also, some countries, such as Russia, with its invasion of Ukraine, have made it essential that we respond firmly with sanctions.

Q: And how should the international society cope with terrorism or geopolitical conflicts?

A: The problem of terrorism is a real one and is important. I don't think it's an existential threat that will destroy the U.S. or Japan. but it can create great disruption and inconvenience. So it's important for us to continue to take strong positions to try to limit the influence of al Qaeda and ISIS.

But I don't think it makes sense for us to try to occupy Middle Eastern countries to prevent it. That was a mistake that we made with the invasion of Iraq, and I think it cost us more than it benefited us.

A: Yes. It's harder to set the boundaries, and it's also harder to know when it ends. But there's a danger of overreacting, which helps the terrorists. Someone once said terrorism is like jujitsu, in which the weaker actor uses the strength of the stronger actor against him. And that's what Osama bin Laden did in Iraq. By invading Iraq, we allowed the jihadists to use our strength against us. That's a mistake we should avoid in the future.

Q: And the battlefield is expanding to cyberspace.

A: That's right, and there are a host of issues like cybersecurity, which involve both states and non-state actors. So we have problems, for example, in which China has stolen intellectual property from American companies, but there are also non-state actors who have done the same thing.

Q: Do you think democracy and capitalism will flourish in the future?