MOSCOW -- Russia is courting India to sign a free trade agreement with the Eurasian Economic Union, or EAEU, a move some experts argue could be a "perfect fit" for both countries.

When Russian Foreign Minister Sergei Lavrov visits India on Wednesday, Moscow's top diplomat is expected to discuss the topic with his Indian counterpart.

In late December, Nikolay Kudashev, the Russian ambassador to India, told reporters that Moscow hoped New Delhi and the EAEU would sign a free trade pact within the next year.

"In 2020 we are hopeful of an early conclusion of the free trade agreement between the EAEU and India and the next round of the Russian-Indian Strategic Economic Dialogue with the focus on transport, agriculture, small and medium enterprises," Kudashev said.

Founded in 2015, the EAEU is a free trade bloc consisting of Russia, Belarus, Armenia, Kazakhstan and Kyrgyzstan. The union has a market of 183 million people and a combined gross domestic product of over $1.9 trillion.

The EAEU has focused much of its efforts on building economic ties with Asia, signing free trade deals with Vietnam in 2015 and Singapore in 2019. It is currently negotiating with Indonesia, Thailand, Brunei, the Philippines and Cambodia. 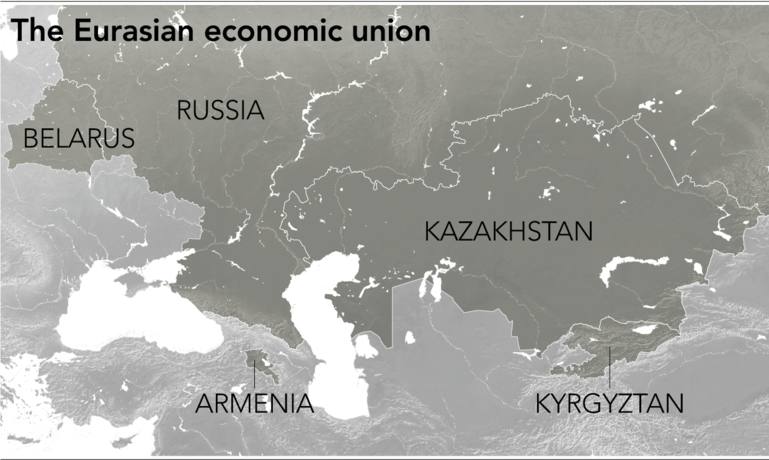 Russian President Vladimir Putin, following his meeting with Indian Prime Minister Narendra Modi in Vladivostok in September, announced that the EAEU would begin talks with India on drafting a preferential trade agreement between the two parties.

A potential EAEU-India deal is part of a push by Moscow and New Delhi to boost their bilateral trade to $30 billion by 2025. Experts say that such an agreement could help Russia reassert itself as a major trading partner for India for the first time since the collapse of the Soviet Union.

"Russia and India have a very good political relationship, but they don't have a normal economic base underlying it," said Alexey Kupriyanov, a senior research fellow at the Institute of World Economy and International Relations of the Russian Academy of Sciences. "We expect that concluding a free trade deal will provide that base."

Kupriyanov noted that in the years after the EAEU and Vietnam signed a trade pact, trade between Moscow and Hanoi grew substantially.

Yet restoring economic ties is not Russia's only motive. Persuading India to sign an agreement with the EAEU would help Moscow elevate the bloc's status by showing that global economic heavyweights take it seriously, contended Artyom Lukin, a professor of international relations at the Far Eastern Federal University in Vladivostok.

"India is a perfect fit for this role," he said. "It is a major economy, but it's industries do not have such a competitive edge as to crush ours."

Lukin added, "We are roughly on the same level of development and that satisfies us since the economic risks [of trading with India] are minimal."

While Russia is also looking to pique China's interest in the EAEU, Moscow intends to keep Beijing at arms length for now. China signed a trade deal with the EAEU in May 2018, but unlike the agreement being discussed with India, it is nonpreferential, meaning that it does not eliminate duties. The Modi government withdrew from the RCEP -- which includes China -- citing the potential impact on Indian service workers and farmers.   © Reuters

Lukin explained Moscow fears that if the EAEU were to completely get rid of customs barriers with China, its market would get swamped by Chinese manufacturers. It does not have similar concerns about India, believing that Russian companies would be more competitive against Indian ones than their Chinese counterparts.

New Delhi also has reservations about free trade deals which could harm its domestic industries. In November, India withdrew from the Regional Comprehensive Economic Partnership, or RCEP, a trade bloc consisting of the 10 countries in the Association of Southeast Asian Nations plus China, Japan, South Korea, Australia and New Zealand.

The Modi government cited concerns over trade deficits and the RCEP's impact on Indian service workers and farmers as its rationale for leaving the deal.

India's exit from the RCEP could pave the way for it to sign an agreement with the EAEU instead, said Chris Devon-Shire Ellis, founding partner and chairman of Dezan Shira & Associates, an advisory firm that works with foreign investors across Asia.

"Influential Indian politicians and the business lobby, which are both fairly protectionist to foreign investment and participation in much of India's domestic market, may well then find the prospect of engaging with the EAEU and Russia less daunting than having to compete with Chinese investors," Devon-Shire Ellis said.

"New Delhi needs to be seen to be doing something to spur the Indian economy," he said. "Providing Indian businessmen with markets across Russia and Central Asia, where India has also been keen to become more involved with, may well be the incentive they are looking for."