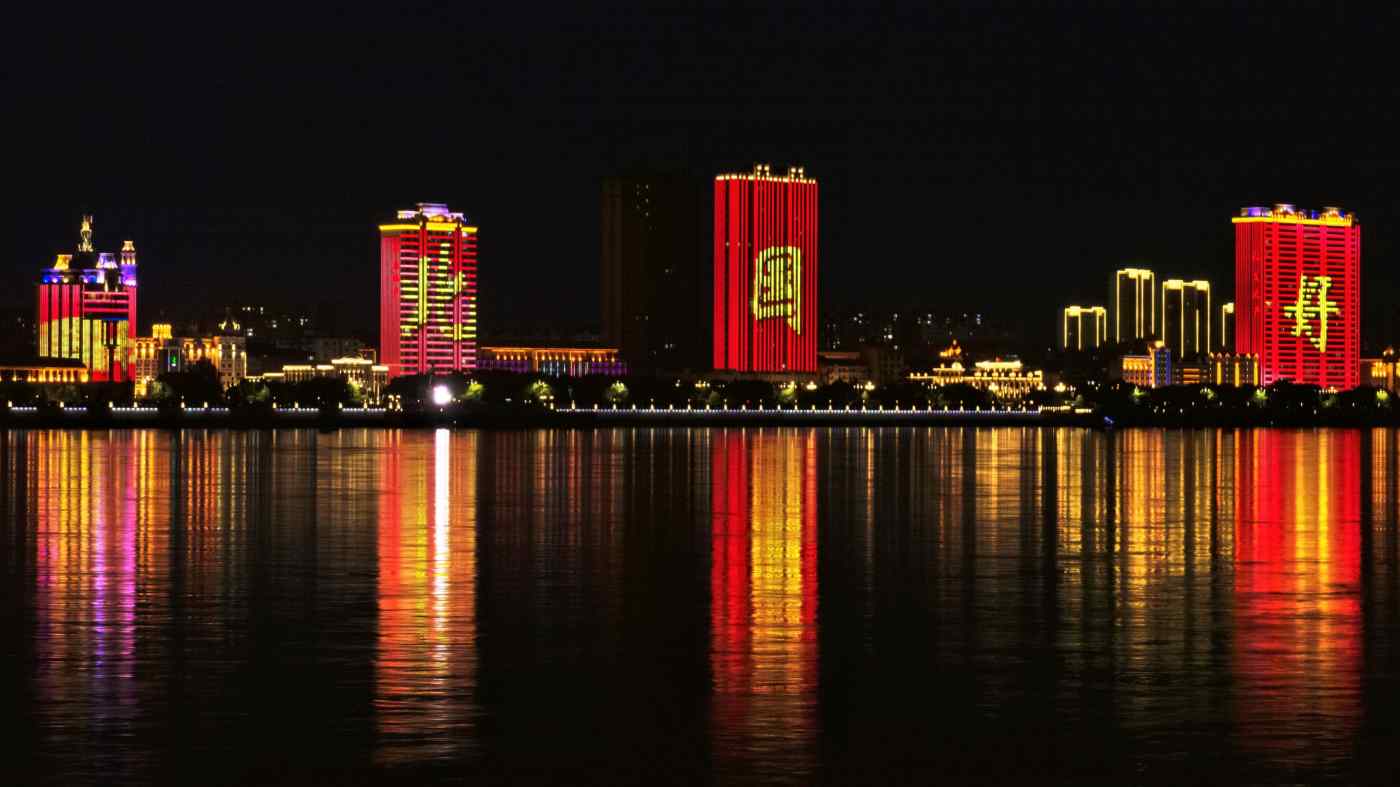 The Chinese city of Heihe as seen from Blagoveshchensk, Russia: The area was once a flashpoint for tensions between the giant neighbors. (Photo by Tatiana Simes)
DIMITRI SIMES JR. and TATIANA SIMES, Contributing writersJuly 22, 2021 13:00 JST | Russia & Caucasus
CopyCopied

BLAGOVESHCHENSK, Russia -- As the sun dips below the horizon, Russians out for an evening stroll in the city of Blagoveshchensk often stop to gaze at the tall red-lit buildings with enormous Chinese characters on the other side of the Amur River.

The Chinese city of Heihe lies just 750 meters across the water. Citizens of the two countries frequently gather on opposite riverbanks to watch motorboats race by, some flying Russian flags and others Chinese.

So when Russia and China marked the 20th anniversary of their Treaty of Friendship on July 16 -- a pact they say has brought relations to the "highest level in history" -- the milestone carried special significance for Blagoveshchensk. Decades removed from violent episodes and tensions that brought the two nuclear powers to the verge of war, the city has sought to reinvent itself as a gateway to the world's No. 2 economy.

The reinvention comes amid growing signs of Russia and China drawing closer as their relations with the West sour. Some of Blagoveshchensk's larger aspirations, however, remain frozen in time by COVID-19.

Geographic proximity has translated naturally into economic exchanges. Russia's Amur Region, of which Blagoveshchensk is the capital, counts China as its largest trading partner by far. In 2020, the region's exports to China rose by 16% to reach $345.3 million, according to data from the local Ministry of Economic Development and Foreign Relations. Amur's main exports to China include soy, timber, gold, coal and electricity.

To spur trade further, Russian and Chinese authorities have built a 1,080-meter automobile bridge over the Amur River to connect Blagoveshchensk and Heihe. This is the first cross-border bridge between the countries, and Russia's Ministry for Far East and Arctic Development estimates it will allow an additional 4 million tons of goods and 2 million passengers to cross each year -- when it finally opens.

After nearly three decades of negotiations and three years of construction, the bridge was finally completed in November 2019. But the scheduled April 2020 opening was postponed indefinitely due to the pandemic. Another top priority has been to transform Blagoveshchensk into a magnet for Chinese tourists. Over the past decade, the number of Chinese visitors jumped tenfold, reaching 116,000 in 2019. This made Blagoveshchensk the fourth most popular destination in Russia for Chinese tourists after Moscow, St. Petersburg and the Far Eastern port of Vladivostok.

Like the bridge, however, COVID-19 upended tourism. Russia was one of the first to shut its border with China in late January 2020, hoping to keep the coronavirus out. More than a year and a half later, the streets of Blagoveshchensk remain empty of Chinese visitors, putting serious pressure on the hotels and restaurants that had catered to them.

Still, local authorities are hopeful that once the pandemic subsides, Chinese tourists will return to Blagoveshchensk in greater numbers than before.

The centerpiece of efforts to attract them is the Golden Mile project, a zone on the city's embankment that will include exhibition halls, a business center, a four-star hotel, a Russian Orthodox Church, a sports complex, an area for leisure and cultural recreation, a logistics terminal and even a museum dedicated to "Russian-Chinese Friendship."

The Golden Mile will also feature a cross-border cable car that will whisk businesspeople and tourists over the Amur River in under three minutes. Valeria Repkova, general director of the Agency for Project Initiatives -- the developer responsible for building the cable car -- told Nikkei Asia that the system will be able to carry 2.5 million passengers in both directions per year.

Regional authorities are also looking to upgrade the Blagoveshchensk airport by building a second runway and an international passenger terminal. In an interview with local radio last November, Amur Region Gov. Vasily Orlov said the improvements would allow Blagoveshchensk to emerge as a transit hub for Chinese tourists headed for western Russia.

"Tourists will arrive in Heihe, take the cable car to Blagoveshchensk and, after visiting our attractions, fly to Moscow or St. Petersburg," he said.

Such ambitious plans for courting China would have been unthinkable four or five decades ago.

Since its founding in 1858, Blagoveshchensk has often found itself at the center of crises between the neighbors. In 1900, at the height of the Boxer Rebellion, Chinese forces opened fire on Blagoveshchensk. As the city became gripped by panic, Russian Cossacks drove all of Blagoveshchensk's Chinese residents into the Amur River, where thousands of them drowned. 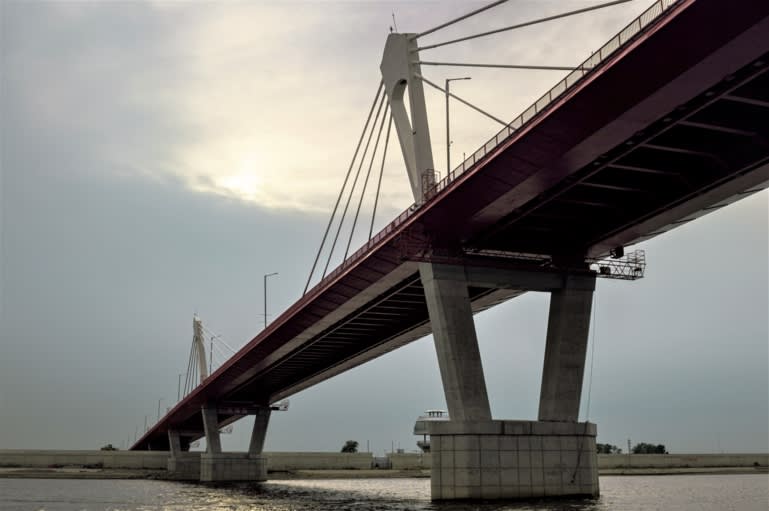 The opening of this bridge connecting Blagoveshchensk with Heihe has been delayed by COVID-19. (Photo by Tatiana Simes)

Tensions flared again after the 1969 border conflict between the Soviet Union and Maoist China, which almost saw the two nuclear-armed communist states go to war. In the years that followed, Blagoveshchensk became a highly militarized outpost that was closed off not only to foreigners, but even to Soviet citizens from outside the city.

Anna Zabiyako, a historian at Amur State University, said that both Russia and China have tried to downplay such contentious episodes from the past since relations began to improve in the 1990s. Instead, she said both sides tend to emphasize historical examples of cooperation, such as the Soviet liberation of Manchuria during World War II and the "Golden era" of Soviet-Chinese relations during the 1950s.

"For us, these [past conflicts] are exceptions to the rule," she said. "They are examples of tragic misunderstandings and the inability to work out problems."

Still, many in Blagoveshchensk breathed a sigh of relief when Russia and China signed the Treaty of Good-Neighborliness and Friendly Cooperation on July 16, 2001, renouncing territorial claims against each other.

"Everyone on the border was very happy when the deal was signed," Zabiyako said. "It marked the beginning of a new chapter in Russian-Chinese relations."

Late last month, Russian President Vladimir Putin and Chinese President Xi Jinping announced that the treaty would be automatically extended for another five years once it expires in February 2022. In a joint statement afterward, the two leaders declared that Moscow and Beijing "are determined to turn the common border into a belt of eternal peace and friendship handed down from generation to generation."

But as Blagoveshchensk is discovering, in some ways that is easier said than done.

Boris Beloborodov, the business ombudsman for the Amur Region, told Nikkei that despite the geographic closeness, companies in Blagoveshchensk still face significant logistical hurdles when exporting their goods to China. During the spring and autumn months, he explained, it is impossible to deliver cargo by boat over the Amur River due to floating ice.

Further complicating matters is the lack of a direct railroad route to China, Beloborodov said. As a result, goods going from Blagoveshchensk to China by rail must travel to a border crossing 1,400 km to the east or 1,700 km to the west.

"The new bridge could help with this problem, but rail shipments are much more profitable than delivering goods by [truck]," Beloborodov said.

He added that so far, both the federal government in Moscow and Chinese investors have been reluctant to provide financing for a railroad that would connect Blagoveshchensk and Heihe.

Meanwhile, the coronavirus pandemic continues to cast a long shadow over Blagoveshchensk's tourism plans. Despite being the first country to register a COVID-19 vaccine last year -- Sputnik V -- Russia has been fighting a severe third wave of infections, causing record cases and deaths.

Marat Mkrtchan, a lawyer who works with many hotels and restaurants in Blagoveshchensk, warned that unless Amur Region authorities rapidly step up their vaccination efforts, Beijing will not allow Chinese tourists to return to Blagoveshchensk anytime soon.

"If we want to promote tourism tomorrow, then we should have resolved these questions yesterday," he said. "But so far, we're not even resolving them today."