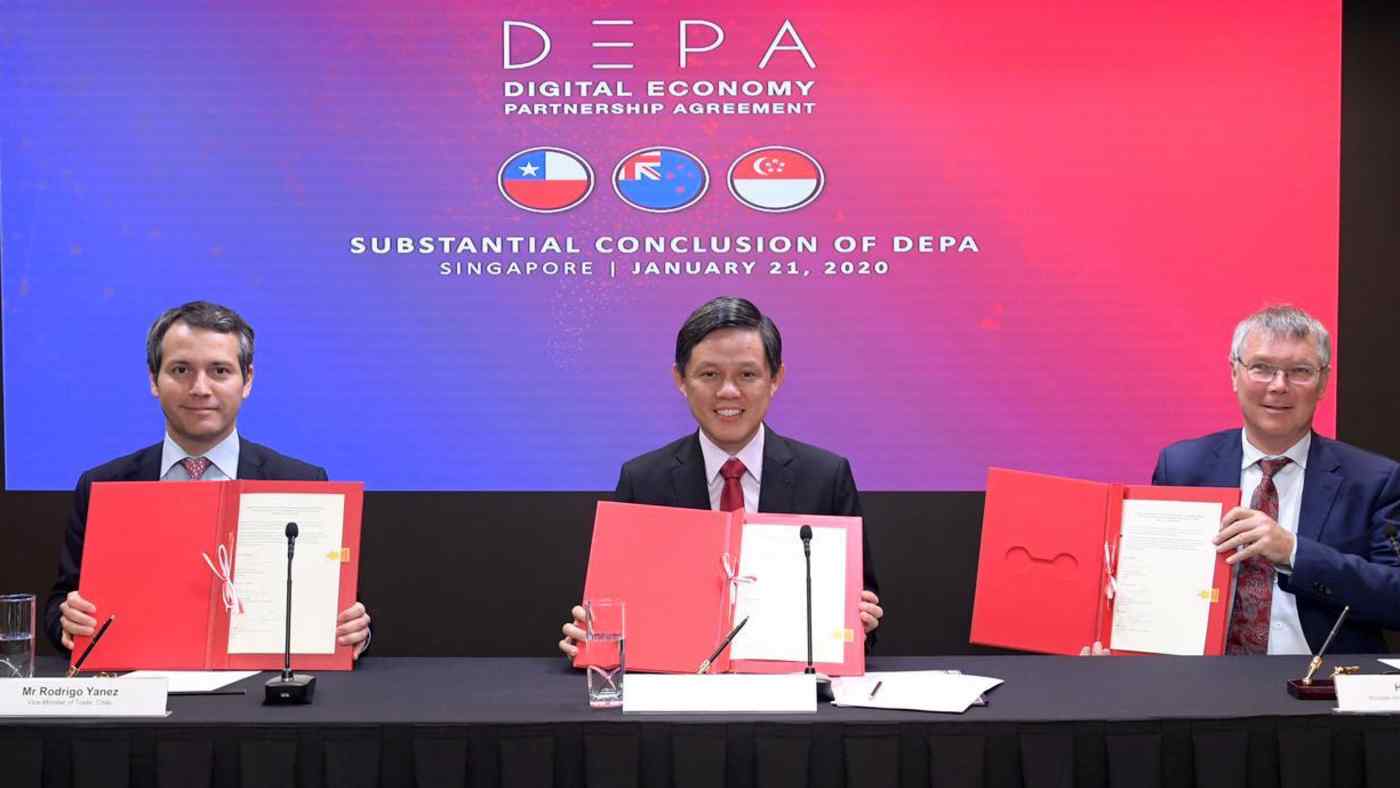 The Digital Economy Partnership Agreement, or DEPA, goes "beyond the current disciplines in our existing free trade agreements," Chan Chun Sing, Singapore's minister for trade and industry, said. "We also want to address new issues intrinsic to the digital realm such as the governance of artificial intelligence and digital identities."

The countries have used free trade as an economic growth engine. The trio, along with Brunei, had inked the predecessor to the Trans-Pacific Partnership trade pact, which went into effect in 2006. Their new agreement aims to blaze a trail and set a global standard for an increasingly important segment of the world economy.

Chan indicated that the plan is to bring other countries on board after the agreement is signed this year. "We see DEPA as an open architecture. We welcome the participation of other like-minded countries," he said.

The deal was concluded just eight months after talks began in May, though members intend to continue updating it as new technological innovations arise.

The agreement is meant to establish rules in areas not covered by the TPP or by the Japan-U.S. trade deal based on the pact.

The countries agreed to encourage corporate adoption of frameworks for "transparent, fair and explainable" use of artificial intelligence, as well as to allow smoother cross-border data flows to facilitate development of new products and services.

The deal calls for "mechanisms to promote compatibility" among legal frameworks for protecting personal data, which would lighten the burden of compliance that businesses face.

In financial technology, members will promote "nondiscriminatory, transparent and facilitative rules," such as open APIs, which are interfaces between the systems of financial institutions and third parties.

The three countries agreed to collaborate on "regulatory sandboxes" for innovation. Singapore's fintech sandbox, which offers limited-time regulatory exemptions within certain boundaries, was cited as a model.

The agreement urges adoption of international standards for electronic invoicing systems to make international trade more efficient. Sending documents back and forth accounts for an estimated 20% of the administrative costs involved in trade.

Singapore and New Zealand have introduced systems based on the Peppol international framework.

The rush to conclude DEPA is a response to the rapid expansion of the digital economy, which has created an urgent need for shared rules to protect consumers as well as spur investment and innovation.

Google, Temasek Holdings and Bain & Co. estimate that Southeast Asia's internet economy will swell to $300 billion in 2025, triple the 2019 level. Global cross-border data traffic is set to surge fivefold between 2016 and 2021, according to a report by McKinsey Global Institute.

"By addressing emerging and important issues that impact the digital economy such as artificial intelligence and data innovation, DEPA is a milestone in international trade agreements," said Ted Osius, Google's vice president for Asia-Pacific public policy and government relations.