TOKYO/BEIJING/MANILA -- Chinese survey vessels are increasing their research in the Asia Pacific region, as Beijing steps up efforts to increase its maritime interests.

Nikkei analyzed the automatic identification system data on 32 Chinese survey vessels from a database provided by ship tracking website Marine Traffic, and examined the ships' voyages over the 12 months through late November 2020.

Survey vessels are designed to examine subsea structures by sending sound waves into the ocean and collecting samples underwater.

According to the database of the International Maritime Organization, there are 64 registered Chinese survey vessels built in or after 1990, surpassing the U.S.'s 44 and Japan's 23.

Data show that many Chinese research vessels are conducting activities near Guam and in the South China Sea. China sees the waters around a part of the "first island chain" as strategically important in regard to protecting its national security interests. These waters run along Japan's Okinawa islands, Taiwan and Philippine islands. But China's marine surveys are reaching into waters beyond the "second island chain," in the Western Pacific, which runs from Japan to Guam and south to Indonesia. 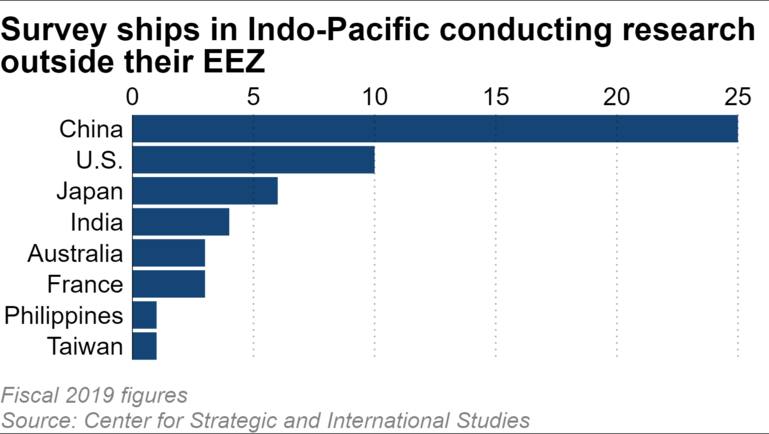 Many Chinese vessels receive warnings if they conduct research in the exclusive economic zones of other countries without permission. Of the 17 Chinese vessels operating in the past year in another country's EEZ or in undefined international boundaries, more than 10 vessels were reportedly involved in suspicious activities.

The United Nations Convention on the Law of the Sea stipulates that prior consent is needed to carry out surveys in another country's EEZ. Japanese and American vessels conduct surveys in abidance with this international law. 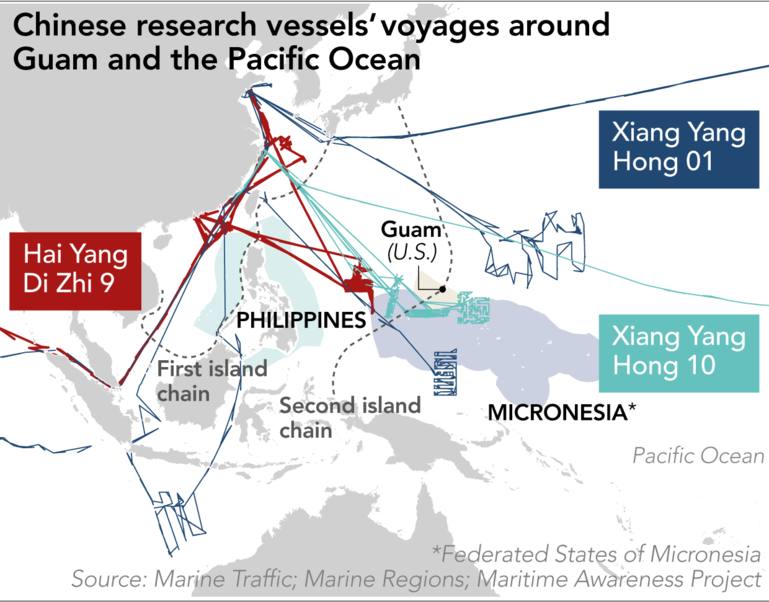 AIS data from Marine Traffic show other Chinese vessels that are mostly conducting activities near Guam. The area near Guam is important due to the existence of cobalt, manganese and other seabed minerals. Also, in the event of a conflict in the Taiwan Strait, -- such as China using force to bring the self-governing island under its control -- the U.S. base on Guam would rise in strategic importance.

"Some Chinese vessels conduct marine life surveys and marine surveys for research purposes, but those sailing near Guam appear to be conducting surveys for security reasons as well," said Fengjun Duan, senior research fellow at the Canon Institute for Global Studies. "Data obtained by the survey could be both available for military and civilian use."

China is increasing its influence over the Pacific island nations. Beijing established diplomatic relations with the Solomon Islands and Kiribati in September 2019.

Marine survey data is useful for operations by submarines as well.

The Asia Maritime Transparency Initiative of Washington's Center for Strategic and International Studies last April published a report on Chinese survey vessels in the Indo-Pacific region. "Understanding the bathymetry in these areas is critical if Chinese submarines hope to effectively operate beyond the 'first island chain' surrounding China's near waters," the report said, referring to the study of the underwater depth of ocean or lake floors. In the South China Sea, Chinese survey vessels enter the EEZs of Southeast Asian countries on an almost daily basis.

For example, last April, the Hai Yang Di zhi 8 entered Malaysia's EEZ. Chinese vessels continually operated near the West Capella, a drillship operated by London-managed Seadrill and contracted to Malaysia's Petronas, and also conducted a survey, according to Reuters.

The U.S. has sent the Independence-class littoral combat ship USS Montgomery off the coast of Malaysia to conduct freedom of navigation patrols in the South China Sea. Last July, the Independence-class littoral combat ship USS Gabrielle Giffords conducted routine operations in the vicinity of the Chinese vessel Hai Yang Di Zhi 4, which was operating off the coast of Vietnam and near the disputed Spratly Islands.

In some cases, the survey ships are escorted by the Chinese coast guard, spurring tensions. The governments of Japan and China agreed in 2008 to jointly develop gas fields near the median line between the two countries, but talks have been stalled since 2010. According to Japan's foreign ministry, China has built 16 offshore structures on the Chinese side of the median line between China and Japan. It appears that China's survey activities are continuing in these waters as well.

Last May, the Ye Zhi Zheng, a Chinese survey ship operated by the China Geological Survey, was observed sailing in a grid pattern near the waters. This is a typical way a ship moves when it is conducting a detailed survey of seabed topography and structures. Furthermore, a Chinese drilling ship in March 2019 reportedly drilled for gas near the median line between China and Japan.

China has a different opinion about other countries' maritime claims, saying it has historical rights to the waters.

"Chinese survey vessels interpret international law to suit their own convenience and justify the area of activity," said Shigeki Sakamoto, professor of Doshisha University. "If they continue their surveys, Japan [for one] should consider taking strong measures," Sakamoto said.