US and allies invoke Philippine 2016 arbitration victory to pressure China MANILA -- Patrolling the disputed South China Sea on June 30, a Philippine Coast Guard vessel approached a ship and blasted a radio warning: "You are within the Philippine exclusive economic zone. You are required to provide the following: name of vessel, intention, last and next port of call."

The coast guard later reported that it had dispersed five Chinese and two Vietnamese vessels, enabling Filipino fishermen to get on with "normal fishing."

The episode was documented in a video clip uploaded to Facebook, and is the latest example of efforts by the Philippines to publicize Chinese incursions into its exclusive economic zone (EEZ).

In recent months, Manila has produced photographs of hundreds of Chinese "militia" vessels moored in Whitsun Reef and other parts of its 200-nautical-mile (370-km) EEZ. It has also raised concerns about a possible takeover of another reef in the strategic and resource-rich waterway.

Amid domestic pressure to confront Beijing, which claims nearly the entire South China Sea, the Philippines is becoming more assertive of its maritime claims. The U.S., its oldest ally, is meanwhile enlisting Indo-Pacific and Western allies in a campaign to try and keep China's maritime expansion in check. Between March 1 and May 25, 13 Philippine law enforcement or military vessels made 57 visits to reefs in disputed waters. In the previous 10 months, there had been seven visits by three vessels, according to the Asia Maritime Transparency Initiative (AMTI) in Washington.

The ramped-up patrols have been backed by a flurry of diplomatic protests filed by the Department of Foreign Affairs, invoking the July 12, 2016, ruling by an international tribunal in The Hague, which adjudicated that China's sweeping ownership claim of the South China Sea based on "historic rights" has "no legal basis." Beijing rejects the ruling.

Marking the fifth anniversary of that legal victory, Philippine Foreign Affairs Secretary Teodoro Locsin Jr. last month said "the award is final" and "continues to be a milestone in the corpus of international law."

"It dashed among others a 'nine-dash line' -- and any expectation that possession is 9/10ths of the law," Locsin said, in a snipe at China, which bases its extensive claims on its unilateral nine-dash line demarcation.

Southeast Asian nations have directly and indirectly used the ruling to strengthen their maritime claims, according to analysts. Vietnam, another disputant with China, has considered a similar legal action. The U.S., Japan, Australia, the U.K, France, and Germany have all backed the court's decision.

"The United States reaffirms its July 13, 2020, policy regarding maritime claims in the South China Sea," Blinken said in a statement on the fifth anniversary of the ruling. "We also reaffirm that an armed attack on Philippine armed forces, public vessels or aircraft in the South China Sea would invoke U.S. mutual defense commitments under Article IV of the 1951 U.S.-Philippines Mutual Defense Treaty."

Carl Thayer, professor emeritus at the University of New South Wales in Canberra, said, "If the Philippines had not filed a claim for arbitration under UNCLOS [the United Nations Convention on the Law of the Sea], Philippine inaction could be used by China to argue that the Philippines acquiesced to its claims to land features and marine resources in the South China Sea."

"Other claimant states, such as Vietnam and Malaysia, would have been left with little choice but to put up or shut up," Thayer said. 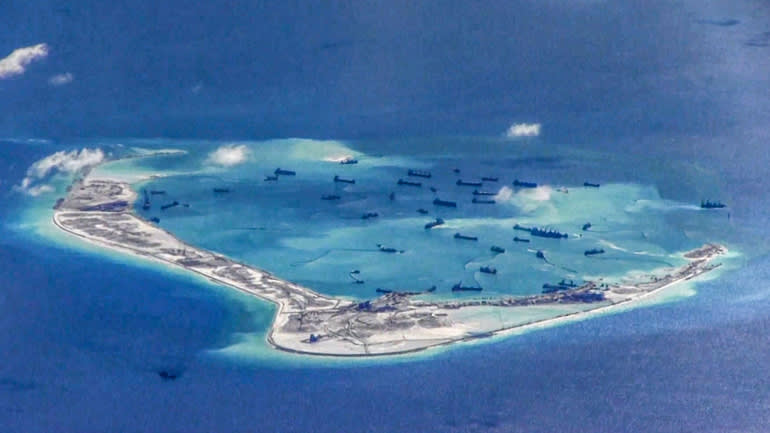 Chinese dredging vessels moored at Mischief Reef in the disputed Spratly Islands in May 2015. (File photo by U.S. Navy/Reuters)

Philippine President Rodrigo Duterte, who assumed office 12 days before the ruling was handed down, initially sidelined the victory with an eye to billions of dollars in investments from China, much of it for infrastructure.

But speaking before the U.N. General Assembly in September, Duterte spoke about the ruling. "We firmly reject attempts to undermine it," he said. He also "welcomed the increasing number of states that have come in support of the award." But the president flip-flopped in May as his government hoped to secure a steady supply of COVID-19 vaccines from China.

The arbitral award doesn't have an enforcement mechanism, and Beijing has continued to ignore it.

During the arbitration process, China turned seven more reefs into artificial islands, and later converted them into military outposts.

China has built airstrips, hangars that can accommodate dozens of combat aircraft and bunkers, and has installed radar and communications systems on Mischief Reef in the Spratly Islands -- which Beijing took over in 1995 -- and on the reclaimed islands of Subi and Fiery Cross, according to AMTI.

Chinese ships have been accused of harassing Malaysian and Vietnamese oil exploration projects. In 2019, a Chinese vessel sank a Philippine fishing boat, the Gem-Ver. Last year, a Chinese naval vessel trained a weapon on a Philippine counterpart. Beijing early this year enacted a law allowing its coast guard to fire on foreign vessels.

"It's not presumptuous to surmise that, being legally defeated by the award, Beijing decided that it would instead push on physically in the South China Sea, focusing on exerting might over right," said Collin Koh, a research fellow at S. Rajaratnam School of International Studies in Singapore.

The incursions by China have complicated talks with Southeast Asian nations on a code of conduct for the South China Sea. According to Southeast Asian diplomats, China had hoped to finalize the code this year to show that it can resolve disputes without the intervention of "non-regional" parties like the U.S. 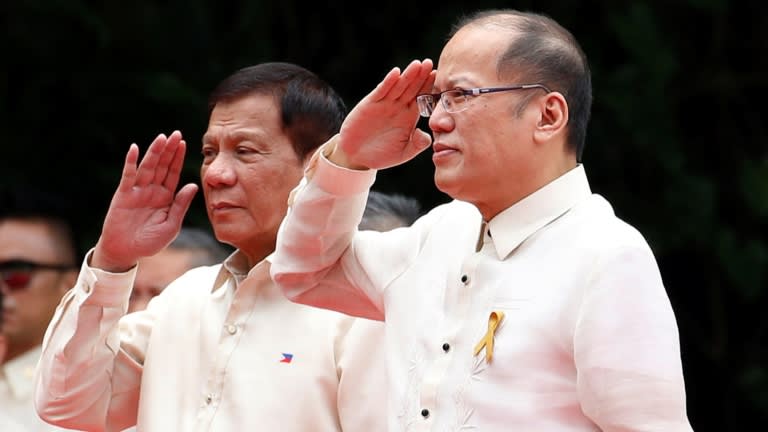 Former Philippine President Benigno "Noynoy" Aquino III, right, decided to file the case and the ruling was handed down 12 days after Rodrigo Duterte, left, assumed office as president. Photo was taken during the inauguration ceremony for Duterte at the Malacanang Palace grounds in Manila on June 30, 2016.   © Reuters

In the Philippines, the death last month of former President Benigno "Noynoy" Aquino, Duterte's predecessor, brought to the fore the arbitration victory as his significant foreign policy legacy, which supporters likened to David going against Goliath. How politicians will use it to make China accountable is shaping up as an issue for the national elections in May next year.

Washington and its allies, for their part, have moved to enforce the 2016 ruling through freedom of navigation operations, Thayer said. The new British aircraft carrier HMS Queen Elizabeth, which was only deployed in May, is set to sail through the South China Sea on a voyage expected to anger Beijing.

"They are in effect disregarding China's claim to historical rights," Thayer said.

But Koh said that to rein in China, Southeast Asian states must also invest in their maritime capabilities and carry out consistent law enforcement operations.

"The recent Philippine Coast Guard action to challenge and expel foreign fishing vessels from the country's EEZ being one such notable example," Koh said.