MANILA -- Philippines on Tuesday said it completed the construction of a beaching ramp on Thitu Island in the South China Sea, allowing it to proceed with runway repairs.

The development bolsters Manila's maritime defense position amid ramped-up efforts by Beijing to assert its expansive territorial claims in the South China Sea.

The Department of National Defense said it held a formal turnover ceremony on the Manila-controlled island on Tuesday. A sheltered port for Philippine fishing vessels was also built.

"We can now proceed with the other projects planned for Pag-asa Island," Defense Secretary Delfin Lorenzana said in a statement, using the local name for Thitu. He said the completion of the ramp was "a necessary first step which will facilitate the transportation of essential construction equipment to the island."

Manila has allocated 1.3 billion pesos ($26 million) for construction and repair works on the island, including the "concreting of the runway" that has been damaged by erosion, the statement said. 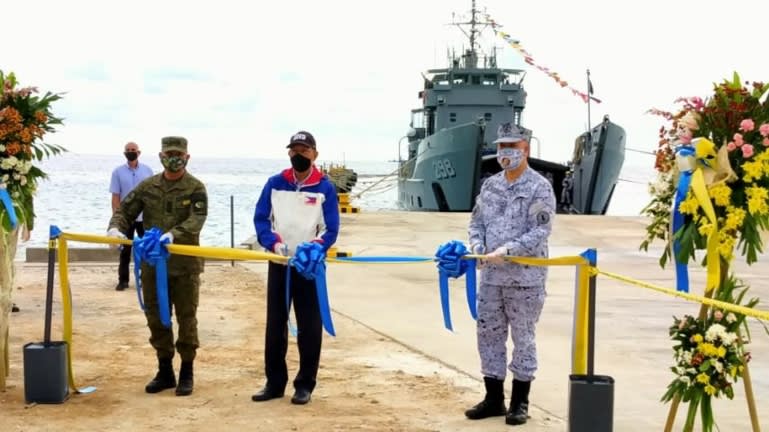 Philippines' top defense officials, including Defense Secretary Delfin Lorenzana (center) and Navy chief Giovanni Bacordo (right), led a formal ceremony on June 9 marking the completion of a beaching ramp on Thitu Island in the Spratly. (Photo courtesy of the Department of National Defense)

The government began repairs in 2018 but works have been hampered partly by inclement weather, defense officials previously said, even as hundreds of Chinese fishing vessels were also reported to be circling the island on multiple occasions.

The airstrip on Thitu Island was built in the 1970s and was the first runway in the Spratly Islands. It is officially 1.3 km long, but the real figure is closer to 1.2 km due to the collapse of the western end, making it difficult for take-off and landing, according to U.S.-based think tank Asia Maritime Transparency Initiative.

The Philippine Navy last month said it docked a ship on Thitu for the first time.

Thitu is located in the Spratly Islands in the South China Sea, where Beijing has built artificial islands with military outposts. Brunei, Malaysia and Vietnam also have overlapping claims in the area.

Bejing recently bolstered its claims in the South China Sea by establishing two new districts and naming 80 features, triggering diplomatic protests from the Philippines and Vietnam.

Manila, meanwhile, last week suspended the termination of an agreement about visiting forces with the U.S. amid rising tensions in the South China Sea, making it easier for both allies to continue military drills.