NEW YORK -- As tensions rise in the South China Sea, a top U.S. Army official underscored in comments made public Friday the importance of developing and deploying new weapons systems that can potentially break Chinese defenses and securing the Indo-Pacific through robust partnerships in the region.

"We're going to have midrange missiles that can sink ships," said the Army's chief of staff, Gen. James McConville, in a discussion streamed by the Washington-based Center for Strategic and International Studies. "We think that's very, very important for the anti-access/area denial capabilities that we may face," he added, referring to the strategy known as A2/AD for short.

"We certainly want to bring to the national leadership options that they can use if required for an anti-access/area denial capability," he said.

McConville confirmed that tests of hypersonic missiles -- in effect, America's fastest long-range weapons -- have been successful.

The event was recorded on Wednesday and aired on Friday.

Experts say deploying all these missiles would be to combat Beijing's A2/AD strategy in the South China Sea, which combines ships, missiles and sensors to keep adversaries from approaching China. If the People's Liberation Army conducts operations to take Taiwan by force, for example, then the First Island Chain -- comprising Japan's main islands, Okinawa, Taiwan, the northern Philippines and the Malay Peninsula -- would be a strategic line of defense for China. 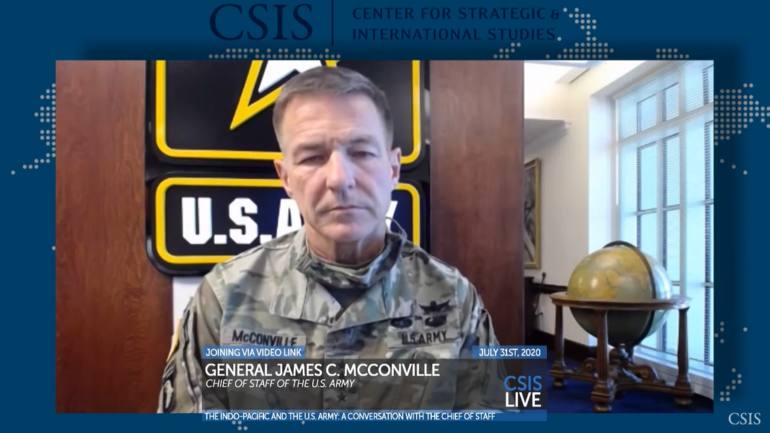 U.S. Army Chief of Staff Gen. James McConville speaks at an event streamed by the Center for Strategic and International Studies on July 31.

"The so-called A2/AD by China and Russia is designed to complicate the U.S. projection of power and the combined operations of the U.S. and its closest allies like Japan," said Tom Karako, a senior fellow at CSIS. "It is targeted to drive a wedge between the U.S. and its allies," he said.

Regarding McConville's statement, Karako said "what is important is that he is reaffirming that the U.S. is sticking to its strategy" of deploying strategic, operational and tactical weapons to counter these programs.

Scholars Stephen Biddle and Ivan Olerich foresaw the A2/AD situation in a 2016 article for the journal International Security.

"Many analysts worry that improvements in Chinese missile, sensor, guidance, and other technologies will enable China to deny the U.S. military access to parts of the Western Pacific that the United States has long controlled," they wrote.

"In this new era, the United States will possess a sphere of influence around allied landmasses; China will maintain a sphere of influence over its own mainland; and a contested battlespace will cover much of the South and East China Seas wherein neither power enjoys wartime freedom of surface or air movement," they argued.

McConville said securing the area will depend on strong U.S. partnerships with countries in the First Island Chain and noted the importance of standing defense agreements with Australia, Japan, New Zealand, South Korea, the Philippines and Thailand.

He was also eager for more alliances and hoped to forge a defense partnership with India. "We used to be, you know, Pacific Command," he said. "Now it's actually Indo-Pacific Command, reflecting just how important they are."

"India is a very important country in the region," and adding it in a defense partnership would be "very, very, helpful" for regional stability and security, McConville said.

But despite the recent heightening of regional tensions as both the U.S. and China flex their military muscle via exercises, the American general urged caution.

"Great-power competition does not mean that there's a great-power conflict," McConville said. "We all need to work to avoid that type of thing. But at the same time, many of these countries, they do want a free and open Indo-Pacific because ... they need to have access" for economic reasons.

"What they're interested in is really security and stability in the region," he said.