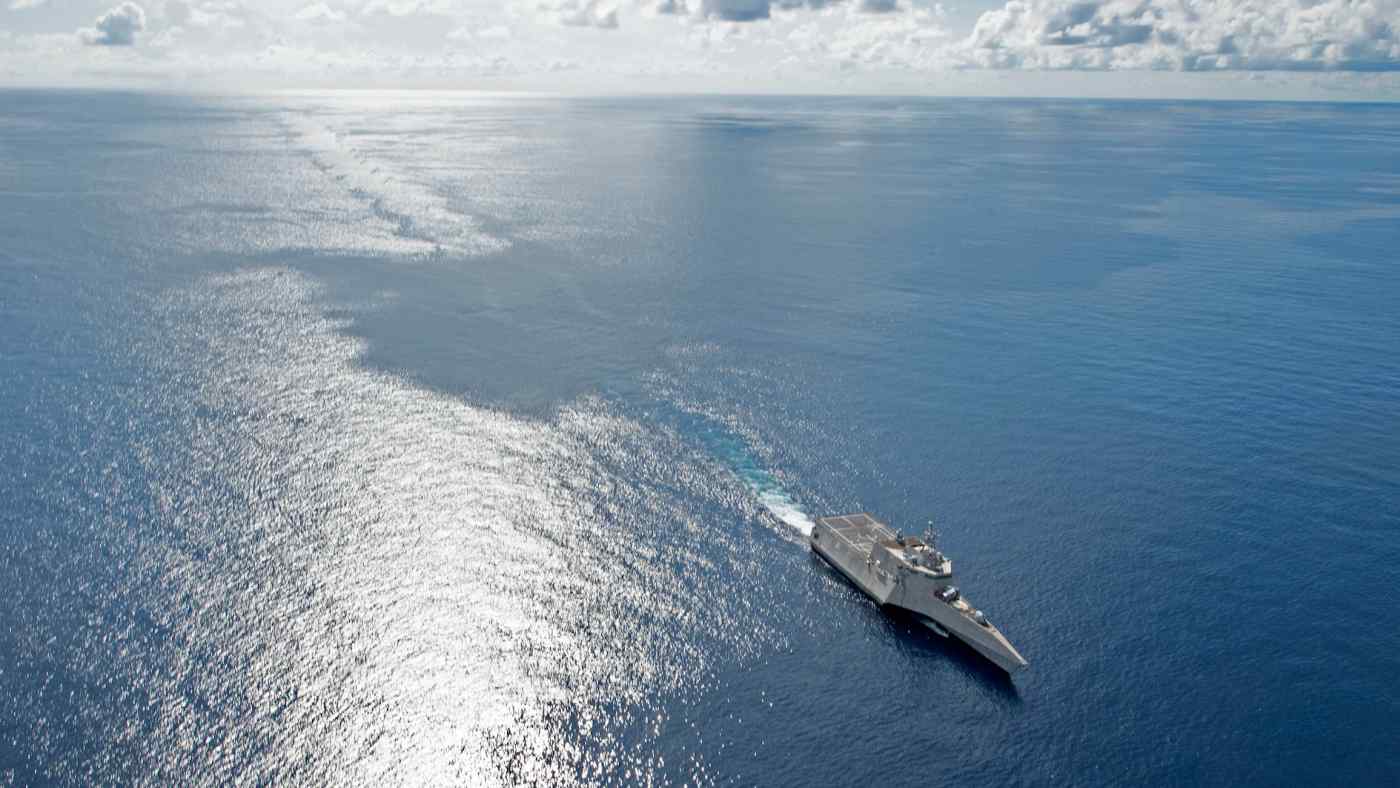 NEW YORK -- The U.S. does not accept Chinese maritime claims over most of the South China Sea and stands with its Southeast Asian allies in protecting their sovereign rights to offshore resources, Secretary of State Mike Pompeo said in a sweeping statement issued Monday.

"Today we are strengthening U.S. policy" regarding the South China Sea, Pompeo said, calling it a vital and contentious part of the Indo-Pacific region.

He said Washington is aligning its position with a unanimous 2016 arbitral tribunal decision that largely sided with the Philippines and rejected China's so-called nine-dash line that it claims marks off its own territory, saying it has no basis in international law.

"Beijing has offered no coherent legal basis for its 'Nine-Dashed Line' claim in the South China Sea since formally announcing it in 2009," and the tribunal's decision is "final and legally binding on both parties," the statement said.

The U.S. rejects any Chinese claim to waters "beyond a 12-nautical mile territorial sea derived from islands it claims in the Spratly Islands," Pompeo said, listing as outside China's jurisdiction "the waters surrounding Vanguard Bank (off Vietnam), Luconia Shoals (off Malaysia), waters in Brunei's EEZ [exclusive economic zone], and Natuna Besar (off Indonesia)."

Any action by China "to harass other states' fishing or hydrocarbon development in these waters -- or to carry out such activities unilaterally -- is unlawful," the statement said.

The statement constitutes a "stark departure" from previous American policies, said Derek Grossman, senior defense analyst at the Rand Corp. "The traditional stance was that the U.S. does not appreciate China's claim of 90% of the South China Sea, but it had not officially taken a position on individual claims," he said.

Stimson Center senior fellow Yun Sun noted that the statement came almost four years to the day after the international tribunal in The Hague delivered its rebuke over Chinese actions in the South China Sea.

Daniel Markey, senior research professor in international relations at the Johns Hopkins University School of Advanced International Studies, said the statement likely came in response to "fairly aggressive Chinese actions throughout Asia, including in the South China Sea, Hong Kong, and along the contested border with India."

The aim is mainly "to show the region -- including Beijing -- that the U.S. is not so distracted or hobbled by the pandemic that it cannot recognize and respond to Chinese nibbling," he said.

But both Grossman and Markey said the U.S. and China would not risk military conflict over the South China Sea.

The announcement came after months of Sino-American trade tensions and further deterioration in bilateral ties over a new Chinese national security law that endangers Hong Kong's freedoms. The U.S. and China recently both conducted naval exercises in the South China Sea, asserting their presence.

Beijing recently bolstered its claims in the South China Sea by establishing two new districts and naming 80 features, triggering diplomatic protests from the Philippines and Vietnam.

Last month, Manila backtracked on the scheduled termination of a visiting-forces agreement with the U.S. amid rising tensions in the South China Sea.

Foreign Affairs Secretary Teodoro Locsin told reporters at the time that President Rodrigo Duterte's decision to stay in the agreement came amid "heightened superpower tensions," without directly referring to the U.S.-China rivalry.

In May, Indonesia said in a letter to United Nations Secretary-General Antonio Guterres that China's nine-dash-line demarcation for the sea lacks a basis in international law and that Jakarta is "not bound" by Beijing's claims. The Indonesian foreign minister later explained that the Chinese claims potentially affect Indonesia's economic interests.

Beijing hit back on Tuesday saying, "The accusation is completely unjustified. The Chinese side is firmly opposed to it." It also urged Washington to "stop its attempts to disrupt and sabotage regional peace and stability."

In a statement issued by the Chinese embassy in Washington, Beijing condemned Washington for exaggerating the situation in the region. The U.S.'s move is an attempt to "sow discord between China and other littoral countries," the statement said.

"The United States is not a country directly involved in the disputes. However, it has kept interfering in the issue. Under the pretext of preserving stability, it is flexing muscles, stirring up tension and inciting confrontation in the region," it insisted.

The statement also stressed that China and members of the Association of Southeast Asian Nations are discussing a Code of Conduct in the South China Sea. The talks "are making visible progress," the statement said.