US to strengthen electronic-warfare abilities in South China Sea 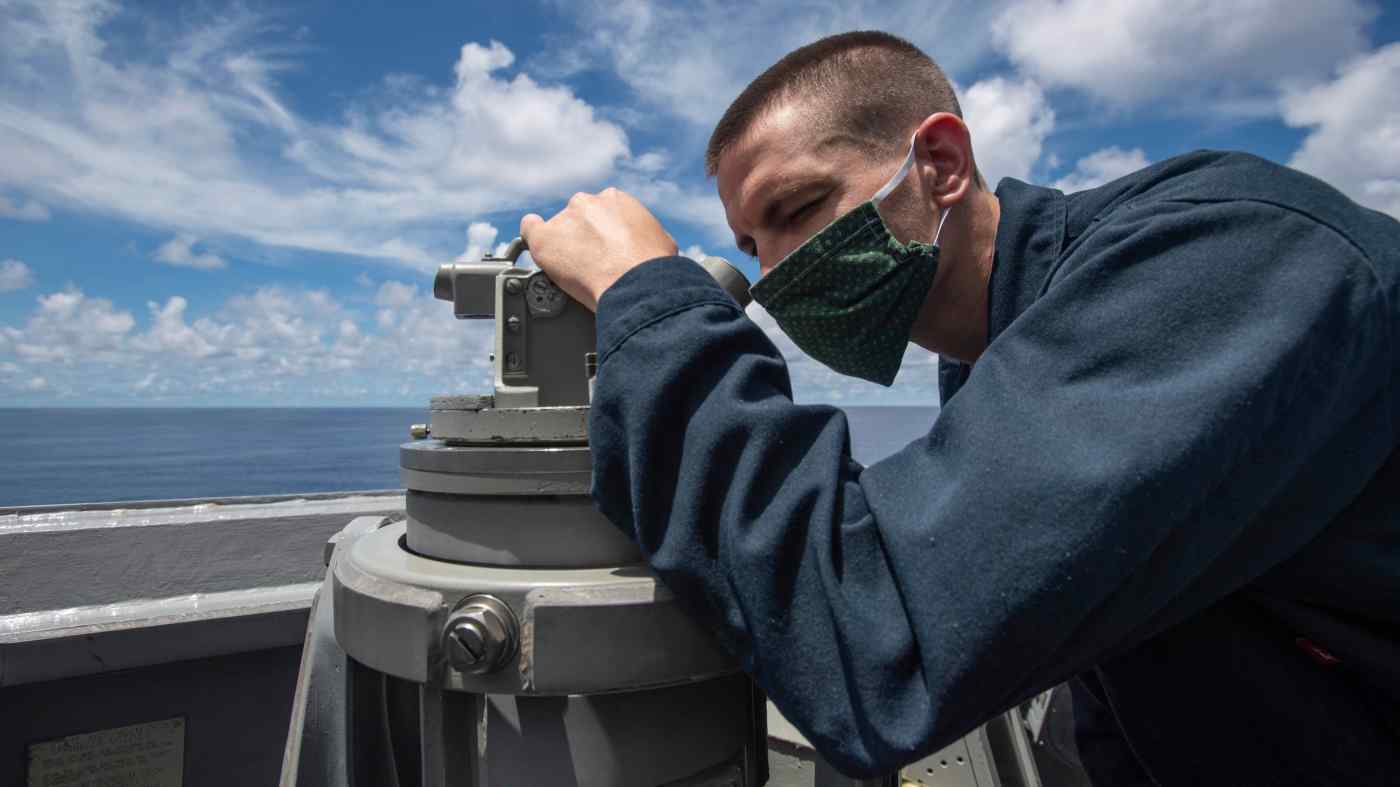 A crew member on the destroyer USS Ralph Johnson scans the horizon on July 14 near the Spratly Islands in the South China Sea. (Photo courtesy of the U.S. Navy)
RYO NAKAMURA and TSUKASA HADANO, Nikkei staff writersJuly 17, 2020 04:16 JST | China
CopyCopied

WASHINGTON/BEIJING -- The U.S. military plans to deploy an electronic-warfare unit to the South China Sea, the latest move by the Trump administration to pressure China after calling Beijing's maritime claims there "completely unlawful."

Two special units will be deployed to the Indo-Pacific region as early as 2021, to operate over various domains from electronic and cyber warfare to precision missile targeting. At least one of them will be stationed around the South China Sea.

Disrupting Chinese military communications through "deception" will be an effective response to an emergency in the South China Sea, a former U.S. Navy officer said.

China claims sovereignty over almost all of the South China Sea under its "nine-dash line" and has accelerated its military expansion in the waters in the past decade. It built a 3,000-meter runway and a large-scale military port on Fiery Cross Reef. Woody Island -- part of the Paracels -- is home to a fighter jet hangar and believed to be armed with land-to-air and land-to-ship missiles. Naval drills have become commonplace in the area as well.

In addition to those on Woody Island, China has deployed on its coast missiles capable of striking anywhere in the South China Sea. To counter this, the U.S. wants the capability to prevent China from tracking American forces should armed conflict break out in the waters.

China's defense strategy is built on the concept of anti-access/area denial, or A2/AD, which combines missiles and sensors to deny the freedom of movement of adversaries and to prevent them from approaching the Chinese mainland.

The U.S. and its friends "have to work closely in a lot of different areas to be able to defeat these weapon systems," the former officer said. "One of the ways is through technologies that can deceive the seekers, the missile seekers, on some of these weapons, so that the seeker thinks it's going towards the aircraft carrier or a ship but it's actually going towards a piece of water a half a mile or more away. This can be done. Deception."

Retired Gen. Jack Keane, a former Army vice chief of staff, said that the U.S. believes that China's A2/AD strategy gives Beijing a competitive advantage. Washington, therefore, must make certain that "there's an effective deterrence there, and long-range missiles is part of the U.S. strategy," he said.

The U.S. withdrew from its Intermediate-Range Nuclear Forces Treaty with Russia last year and has been developing new missiles in that class. It will start negotiations with Asian countries on where to deploy them.

Greater Chinese control in the South China Sea would limit U.S. activity there, making it a safe haven for Chinese nuclear submarines carrying ballistic missiles aimed at the U.S.

In response to recent developments, U.S. Secretary of State Mike Pompeo on Monday said that "Beijing's claims to offshore resources across most of the South China Sea are completely unlawful" -- signaling a shift from the Trump administration's previous neutrality on the waters. The guided-missile destroyer USS Ralph Johnson conducted a freedom-of-navigation operation Tuesday in the Spratly Islands area, according to the U.S. 7th Fleet.

"On Monday, for the first time, we made our policy on the South China Sea crystal clear," Pompeo told reporters Wednesday. "It's not China's maritime empire. If Beijing violates the international law and free nations do nothing, then history shows that the CCP [Chinese Communist Party] will simply take more territory."

The U.S. had been on its back foot in recent years regarding the South China Sea. "While many of us who were in the U.S. government at the time of the Obama administration's announcement of the 'pivot to the Pacific' had great hopes for this strategy, the sad reality of what actually happened was that despite the 'bumper sticker' about the rebalance to the Pacific, the reality is the Obama administration essentially did nothing to put tangible actions behind that strategy," said James Fanell, who served as head of intelligence for the U.S. Pacific Fleet.

President Donald Trump also has little interest in the South China Sea, and whether the U.S. military can curb Chinese activity in the waters over the long term is an open question.