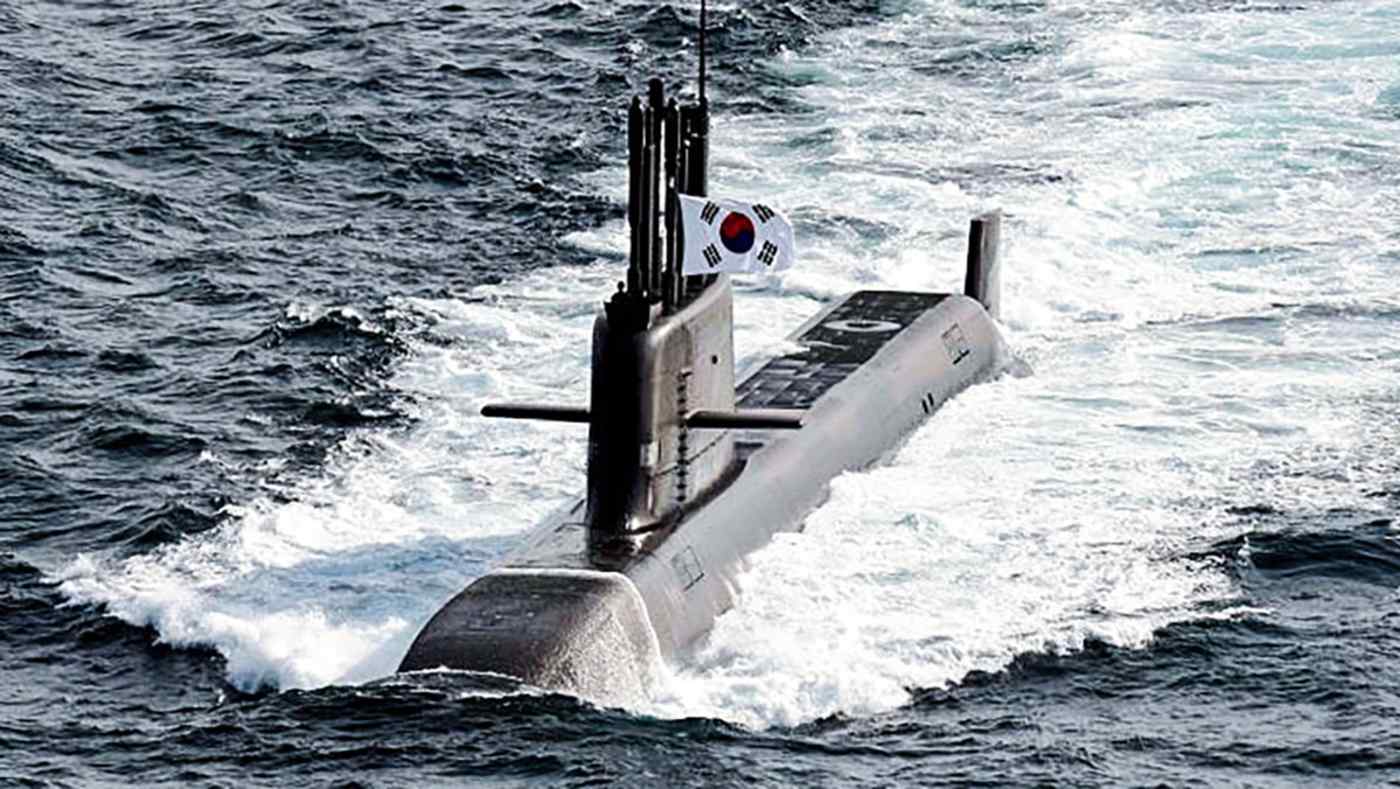 A growing number of South Korean politicians are calling for the development of a nuclear-powered submarine. Seoul's military buildup raises some important strategic and geopolitical questions.

If South Korea continues ramping up its defense spending in line with the medium-term plan, the country will shell out over 60 trillion won for its military machine in 2024 and more than 70 trillion in 2026. In 2025, South Korea's defense spending will be 50% larger than Japan's outlays, according to one estimate. The figures are remarkable given that South Korea's population is about 40% of Japan's and its land area is less than 30% of Japanese territory.

If the draft budget is approved by the National Assembly as is, the nation's defense spending will have grown at an average annual rate of 6.5% during the five years since President Moon Jae-in took office. The country's defense budget topped 20 trillion won for the first time in 2005, surpassed the 30 trillion mark in 2011 and exceeded 40 trillion in 2017. It took the country six years each to increase its military budget by 10 trillion won from 20 trillion to 30 trillion won and then to 40 trillion.

But it has taken only three years for the budget to grow from 40 trillion to 50 trillion won. This is a clear sign of the Moon administration's military spending spree since its inauguration in May 2017. 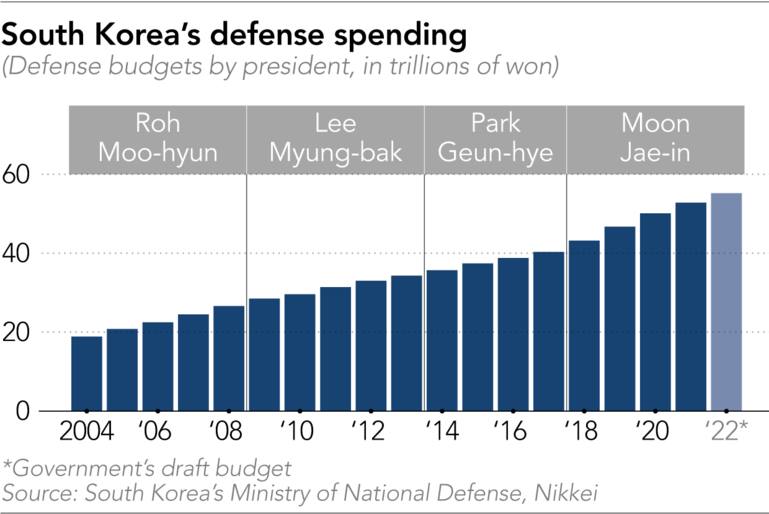 The latest defense budget and the medium-term plan are clearly focused on countering the security threat posed by North Korea's nuclear and missile programs. The proposed new weapons programs include building the 30,000-ton light aircraft carrier, an ultrasmall satellite, an unmanned air vehicle, a next-generation submarine and an air-defense system to intercept shells from long-range guns. All these projects are designed to monitor North Korea's military operations and defend the nation against the North's missile or nuclear attacks.

South Korea's missile program has received a big boost from an agreement in May between Moon and U.S. President Joe Biden to scrap the so-called U.S.-South Korea missile guidelines to remove U.S. restrictions on the nation's ability to develop missiles. The South Korean military plans to shortly deploy greatly enhanced air-to-air and ship-to-ground missiles.

In addition, some policymakers within the South Korean government are calling for the development of a nuclear-powered submarine. But the U.S.-South Korean peaceful nuclear cooperation agreement, which restricts South Korea's military use of nuclear materials, presents a major political obstacle to the idea.

Despite its adherence to a policy of pursuing reconciliation with Pyongyang, which has become more pronounced under the leftist Moon administration, South Korea's government has a three-pronged defense system to counter the security threat from the North. The three pillars are the Kill Chain preemptive strike system, the Korean Air and Missile Defense (KAMD) and the Korea Massive Punishment and Retaliation (KMPR) plan. 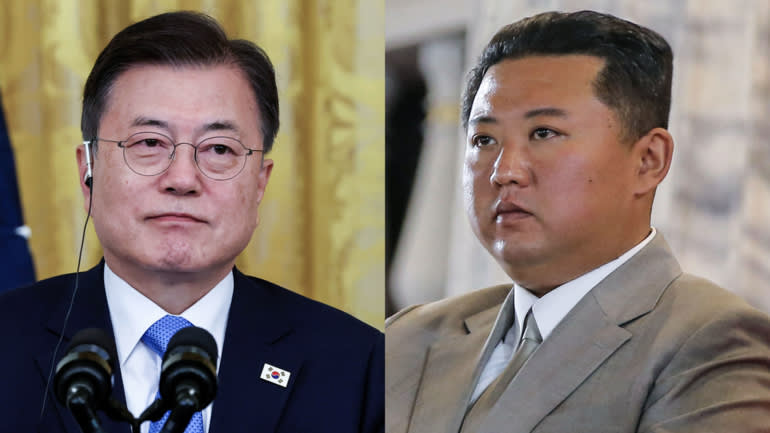 While South Korea's government under President Moon Jae-in, left, has been pursuing reconciliation with North Korean leader Kim Jong Un, right, it also has a three-pronged defense system to counter the security threat from the North. (Source photos by Reuters and KCNA)

Kill Chain is a system to launch a preemptive strike against Pyongyang's nuclear and missile facilities in case South Korea is under an imminent threat, while the KAMD would trace and shoot down North Korean missiles heading for South Korea. The KMPR would be used for relentless and massive retaliation against North Korea if it struck South Korea.

Seoul has been beefing up its military muscle in line with this strategy. The Moon government seems to be intent on upgrading deterrence against North Korea's strike capabilities and strengthening its position in talks with Pyongyang by acquiring weapons with enormous destructive power, such as SLBMs and other types of missiles.

This strategy is basically designed to reduce and eventually end South Korea's dependence on the U.S. for its defense. It is also aimed at gaining leverage in its relationships with what Seoul calls the "four surrounding powers" -- the U.S., Japan, China and Russia.

"In order to avoid leaving our fate in the hands of others and determine it on our own, we indisputably need strong security," Moon said. When he referred to "our fate," he meant the fate of all Koreans living on the Korean Peninsula.

While the transfer of that authority by the end of his term in May 2022 now seems unlikely, Moon apparently wants to leave behind a stronger military less dependent on U.S. forces as his presidential legacy.

The U.S. withdrawal from Afghanistan after the Taliban took control of Kabul, the capital, as well as most other parts of the country, has raised awareness within South Korea of the possibility of facing a departure of the U.S. forces from their country in the future.

While conservatives argue for enhancing their country's alliance with the U.S., progressives are inclined to push the nation toward self-reliant defense. Both camps are effectively campaigning for increased spending to boost the country's military power. 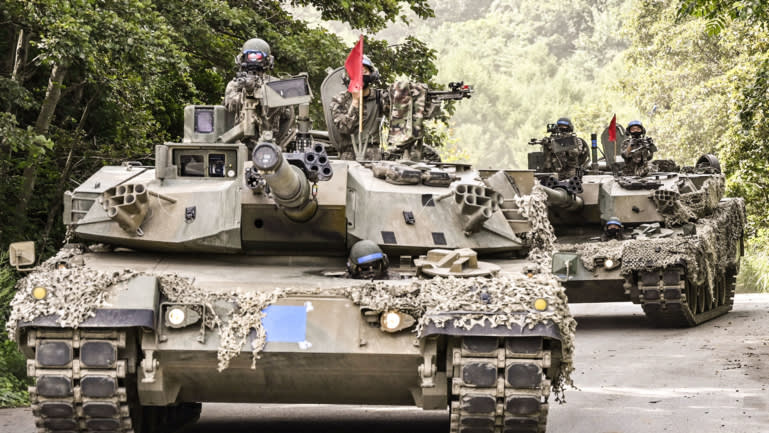 A South Korean army tank participates in a preliminary exercise in August.   © Ministry of National Defense/Kyodo

The progressive Moon administration has been criticized for lacking experts on security and military issues. Political pundits say the administration's foreign and security policies have been driven by political ideology and are not based on clear and coherent medium- to long-term strategies.

Still, the Biden administration will support Seoul's moves to enhance deterrence. That is because a more powerful South Korean military would help reduce the U.S. security burden in East Asia, where the confrontation between Washington and Beijing, in addition to North Korea's nuclear and missile ambitions, is raising tensions. Washington's decision to scrap the U.S.-South Korea missile guidelines reflects the Biden administration's desire to concentrate as much resources as possible on countering China's expansion.

As a key U.S. ally facing pressure from North Korea and China, Japan shares some of the security concerns of South Korea. Tokyo, however, is also wary of Seoul's military buildup. Japan should focus on ensuring that South Korea's growing defense spending will not turn into a potential security threat for it. Japan's next prime minister will face the sticky security policy challenge of how to respond to Washington's calls for greater unity among the U.S., Japan and South Korea, and also Japan's own efforts to boost deterrence.