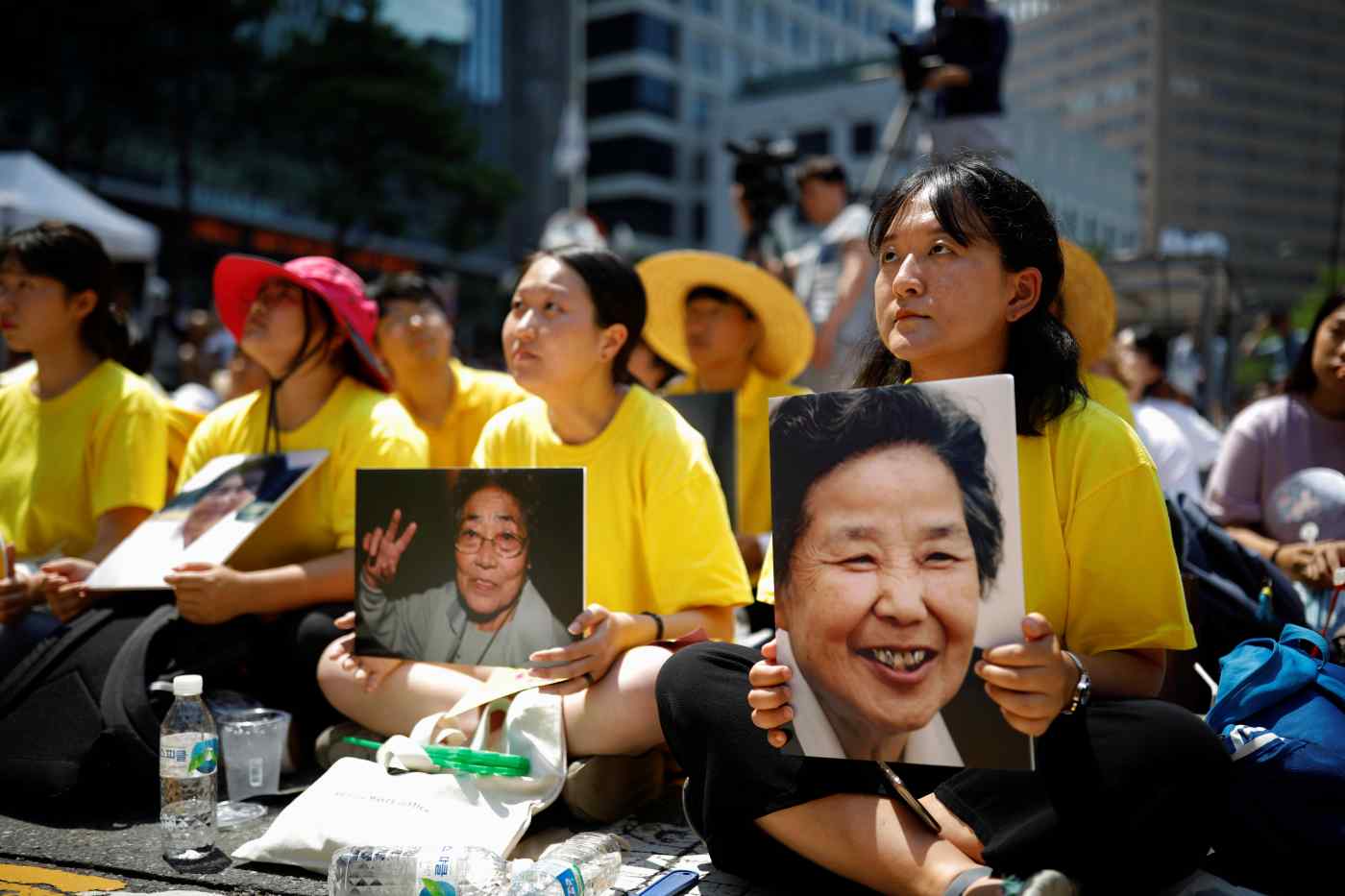 SEOUL/TOKYO -- The government of South Korean President Moon Jae-in said on Wednesday that it has decided to disband a foundation it set up with Japan in 2016 to support wartime "comfort women," marking the latest setback to efforts to improve bilateral relations and triggering a protest from Tokyo.

The foundation, formally known as the Reconciliation and Healing Foundation, was created by the two governments with Japanese funding. The aim was to provide financial support to Korean women who worked in wartime military brothels of the Japanese Imperial Army.

Gender Equality and Family Minister Jin Sun-mee said the disbandment was decided under the principle of putting victims' interests first. The government will continue to work toward restoring the honor and dignity of the victims, she said.

Following the announcement, Japanese Prime Minister Shinzo Abe urged Seoul to deal with the issue "in a responsible manner as a member of the international community."

"The accord was agreed upon as a final and irreversible solution," Abe told reporters. "If international agreements are not observed, relationships between countries will simply break down."

Japan's Ministry of Foreign Affairs summoned South Korea's ambassador to Tokyo, Lee Su-hoon, and lodged a protest against the decision. "It is unacceptable," Foreign Minister Taro Kono said. "We will continue to press South Korea to honor the agreement."

The agreement, signed by Abe and then South Korean President Park Geun-hye, was meant to put the emotionally charged issue to rest. The dispute is a constant source of diplomatic friction as Korean groups try to erect statues of victims around Japanese diplomatic missions in South Korea.

Relations have soured between Moon's liberal-leaning government and Abe's conservative one, as illustrated by the two leaders skipping formal talks during the Asia-Pacific Economic Cooperation summit in Papua New Guinea last week.

The bilateral ties have remained overshadowed by historical issues. Most recently, a South Korean Supreme Court ruling on Oct. 30 ordering a Japanese company to pay compensation to wartime Korean workers sparked a diplomatic uproar, as it reversed the long-held bilateral understanding that the issue was settled when the two countries normalized diplomatic relations in 1965.

Disagreement also surfaced last month over the use of the traditional "Rising Sun" naval ensign by the Japanese Maritime Self-Defense Force during an international fleet review hosted by South Korea.

Tokyo has been urging Seoul to respect the 2015 deal, which was meant to help the two countries move beyond the historical animosities and chart a new course oriented toward the future.

Instead, it has exposed a divide between the two countries that still lingers more than 70 years since the end of World War II.

The foundation was created in July 2016 under the government of Park, who was sentenced to 24 years in prison for embezzlement and bribery this year.

The foundation, funded with 1 billion yen ($8.9 million) from Japan, was offering 100 million won ($88,378) to each surviving victim, and 20 million won ($17,678) to each bereaved family. Of the 47 victims who were alive at the time of the agreement in 2015, 36 expressed their willingness to receive support, and 34 received the money. Application for support also came from 71 bereaved families, and 58 received the support.

However, of the 1 billion yen in funds, 580 million yen is still unused.

In July, the Moon government made a unilateral step to replace the Japanese funding with its own -- a move apparently aimed at making it appear as if none of the victims or bereaved families had ever received money from Japan.

The Moon government insists it has no plans to renegotiate or scrap the 2015 deal itself, while taking steps to gut the agreement.

Now, the foundation is set to begin the dissolution procedure, which is expected to take several months. According to the foundation's charter, any decision on dissolution needs to secure support from at least two thirds of its directors, and be approved by Gender Equality and Family Minister Jin after consultation with the foreign minister.

Chief Cabinet Secretary Yoshihide Suga said, "Japan will patiently persuade South Korea to implement the agreement." Suga played down the risk of the discord undermining the security partnership between Tokyo, Seoul and Washington, saying the three governments will continue to cooperate closely in the face of the North Korean nuclear threat.

The South Korean government said it will put in place a way to dispense the Japanese funds in a reasonable fashion.