SEOUL -- South Korea's largest province is considering whether to stigmatize nearly 300 Japanese companies over their purported actions during World War II, by imposing an ordinance that requires schools to put alert labels on these firms' products in their schools.

Twenty-seven members of the Gyeonggi Province council submitted the bill last week in an attempt to give students the "right understanding on history." If passed, schools will have to place on the items stickers that say: "This product is made by a Japanese war criminal company."

The move is likely further deepen a diplomatic spat between Seoul and Tokyo, which are at loggerheads over territorial issues and the legacy of Japan's 35-year colonization of the Korean Peninsula (1910-1945).

The list of 299 companies includes Nikon, Panasonic and Yamaha. The rule would apply to items such as projectors, camcorders, cameras and copy machines with a price tag of 200,000 won ($190) or more. Most of the companies on the list do not commonly supply products to schools -- they include Tokyo Gas, Kawasaki Heavy Industries and Mitsubishi Heavy Industries.

Both Nikon and Panasonic declined to comment for this story. 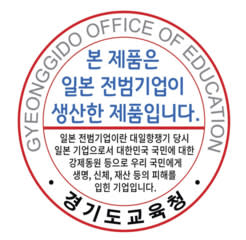 The proposed sticker says: "This product is made by a Japanese war criminal company." The image was captured from the Gyeonggi Provincial Council website.   © Kyodo

"Consumers have a responsibility to remember Japanese companies committed war crimes, and that they have not apologized [for their past wrongdoings]," Council member Hwang Dae-ho said in a statement. "It is a part of history education to help students remember clearly about war-crime companies who do not take social responsibility."

The sensitive historical issues were reopened last October when the South Korean Supreme Court ordered Nippon Steel & Sumitomo Metal to pay reparations to Koreans who were forced to work in Japan during the period of Japanese colonial rule. This was a reversal of a long-standing diplomatic understanding that reparations issues were settled in a 1965 accord establishing diplomatic relations between the two countries.

The neighbors have also clashed over Seoul's decision to disband a fund for wartime "comfort women," which Japanese Prime Minister Shinzo Abe and former South Korean President Park Geun-hye set up in 2016. The countries also dispute the sovereignty of islands in the Sea of Japan, and in December a South Korean warship locked fire-control radar onto a Japanese patrol plane.

Earlier this month, Japanese Finance Minister Taro Aso said tariffs were among measures Japan could take against South Korea should the dispute worsen. He also said steps such as halting remittances or stopping visa issuance could be taken.

But the head of Gyeonggi Province's education office said he was concerned about the negative impact the ordinance could have on relations between Seoul and Tokyo.

"The [central] government should make a decision first because it can hugely affect diplomacy between South Korea and Japan," Lee Jae-jung said in a news conference. "I think it is natural that students study on this by themselves rather than making it a rule."

Gyeonggi province is located in the northwest of the country, and surrounds the capital, Seoul. It has a population of more than 12 million. The council is dominated by President Moon Jae-in's ruling Democratic Party, with its members accounting for 135 members of the 142 seats.