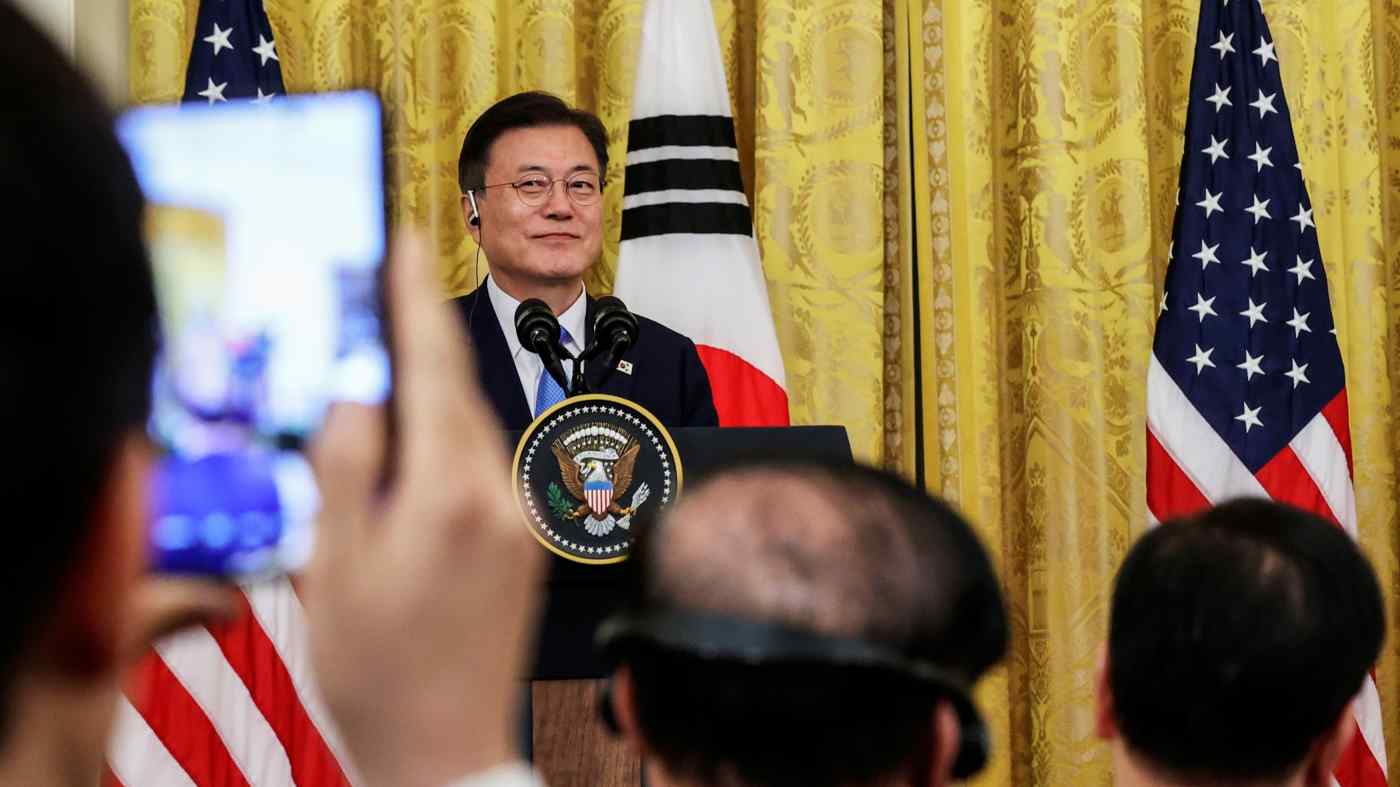 South Korean President Moon Jae-in at a joint news conference with U.S. President Joe Biden at the White House on May 21. The leaders called for peace and stability in the Taiwan Strait in a summit statement.   © Reuters
YOSUKE ONCHI, Nikkei staff writerMay 29, 2021 10:30 JST | South Korea
CopyCopied

SEOUL -- When South Korean President Moon Jae-in called for peace and stability in the Taiwan Strait alongside U.S. counterpart Joe Biden in Washington, it may have come across as an unexpected lurch toward the American position.

Yet their May 21 summit statement drew relatively little pushback from China for touching on a topic that Beijing considers a non-negotiable core interest.

The result was an apparent victory for Moon's middle-power democracy -- a delicate balancing act between the U.S. and China.

China did not officially respond to the statement until Monday, when Foreign Ministry spokesman Zhao Lijian urged countries to "speak and act prudentially on the Taiwan question and refrain from playing with fire." Foreign-policy experts say Zhao's words, though still harsh, were relatively restrained given the topic.

While naming Taiwan in the statement, South Korea throughout the summit tiptoed around China. The leaders' statement did not directly refer to the country, and Moon at a joint news conference afterward acknowledged "the special characteristics between China and Taiwan."

In a Wednesday appearance on South Korean television, Xing Haiming, the Chinese ambassador to South Korea, said with a smile that Seoul had worked hard to keep China out of the joint statement. A Blue House source said of the ambassador's remarks that "China understands South Korea's position."

That understanding appears to have been born out of close consultations with China in the lead-up to the summit. "China had been told about most of the summit agenda ahead of time," according to a diplomatic source in Seoul.

South Korea is believed to have agreed with China ahead of time to steer clear of human rights issues in Hong Kong and Xinjiang in exchange for mentioning the Quadrilateral Security Dialogue, or Quad -- a partnership among the U.S., Japan, India and Australia to promote peace and stability in the Indo-Pacific -- in Moon's statement with Biden.

Park until then had maintained strong rapport with China. She had visited Beijing the year before, and attended a parade with Chinese President Xi Jinping celebrating 70 years since Japan's defeat in World War II.

But the THAAD deployment triggered heavy pushback from China, including tough penalties on South Korean products. This experience left a fear in Seoul of antagonizing Beijing again for failing to consult on contentious issues.

Nestled in the midst of great powers, the Korean Peninsula has always faced a delicate balancing act between its neighbors. North Korean founder Kim Il Sung famously secured mutual aid agreements with both China and the Soviet Union in 1961, taking advantage of the growing rivalry between his two biggest allies to secure economic and military assistance.

South Korea for decades focused primarily on bolstering its economic and security ties with the U.S. It began pursuing a more "balanced" diplomacy under President Roh Moo-hyun, who took office in 2003, the year China overtook the U.S. as South Korea's top export market.

As tensions between the U.S. and China have grown, so has South Korea's geopolitical importance in the region. For Moon, this presents a greater opportunity to pursue a balanced diplomacy like his mentor Roh, under whom the current president served as chief of staff.

South Korean companies promised to invest roughly $40 billion in the U.S. as part of Moon's trip, and the U.S. promised support for a dialogue with North Korea and the easing of tensions on the Korean Peninsula.

Seoul has also maintained close communications with Beijing, and Moon on Wednesday told South Korean party leaders about his plans for Xi to visit in the near future.

But with his time in office drawing to a close, Moon must keep up the diplomatic balancing act against new headwinds, especially as a final decision on THAAD looms. South Korea is conducting an environmental assessment for the system, six units of which are temporarily deployed in the country.

A South Korean proverb warns that in a fight between whales, the shrimp gets torn apart. With political rivalries within South Korea intensifying ahead of a presidential election next year, the stakes only continue to grow higher.