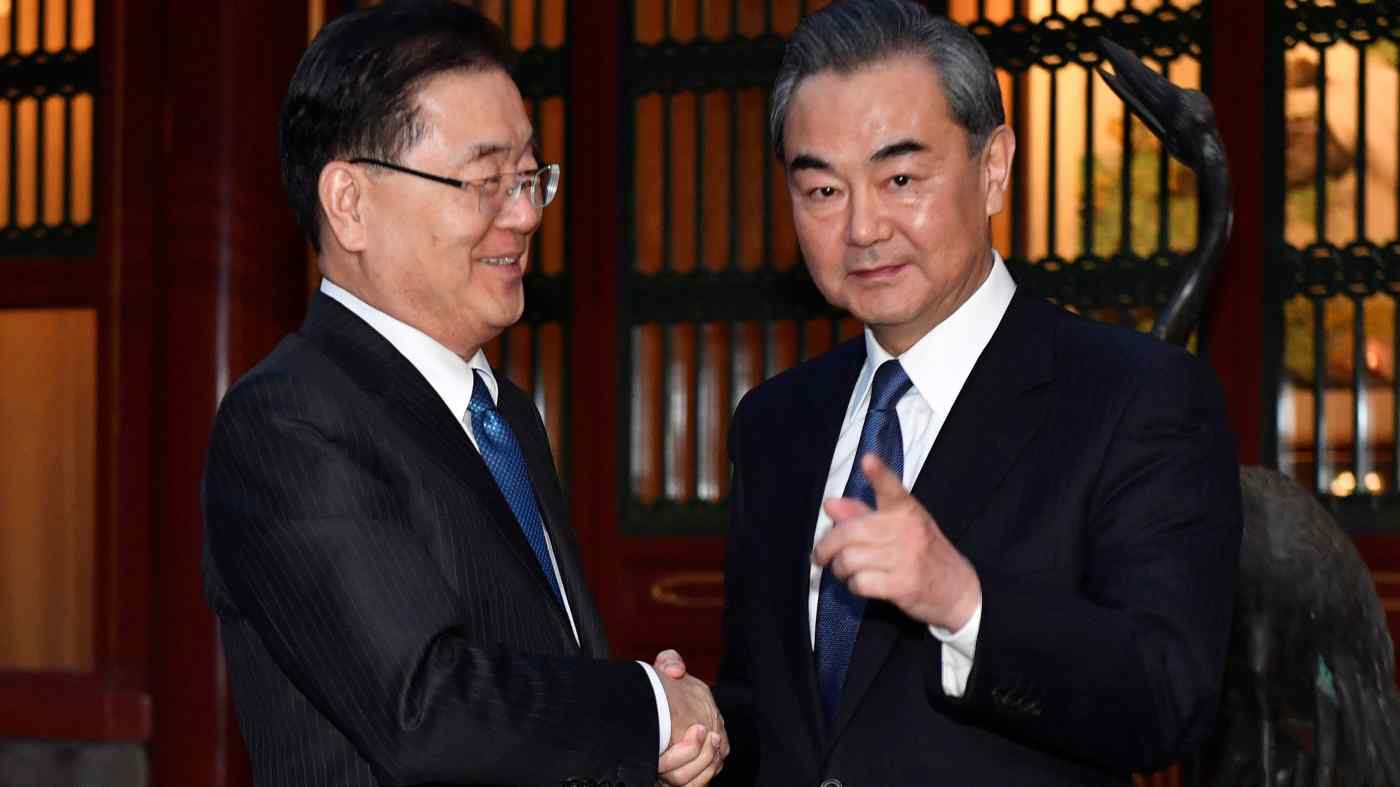 SEOUL -- South Korea's new foreign minister is traveling to China for a meeting with his Chinese counterpart, a trip that comes as Seoul seeks to balance relations with both Washington and Beijing and as the U.S. prepares to publish its policy review on North Korea.

Chung Eui-yong will meet Wang Yi in Xiamen on Saturday in the southeastern province of Fujian because China bars foreign visitors from coming to the capital because of the COVID-19 pandemic. The pair will discuss regional matters including the issue of North Korean denuclearization, South Korea's foreign ministry said.

Tensions between the U.S. and China are escalating over trade, technology, and human rights. During a visit to Seoul last month, U.S. State Secretary Antony Blinken urged China to use its influence to persuade North Korea to give up its nuclear weapons.

South Korea is caught in a tough spot between the two major powers, as it needs to show its ally in Washington that can stand up to Beijing, but at the same time maintain economic ties with China -- its biggest trading partner.

"China thinks South Korea is a weak link in the South Korea-U.S.-Japan alliance, so it will push it to withdraw from the front line against China," Park Won-gon, a professor of international relations at Ewha Womans University in Seoul, told Nikkei Asia. "On the other side, the U.S. wants Seoul to join the trilateral alliance to counter China."

"So far, South Korea takes a strategic ambiguity, but it will face bigger pressure if it has no concrete principles."

The meeting -- the first trip by a South Korean foreign minister to China in three years -- comes amid a flurry of diplomatic activity over the past few weeks. Wang has met counterparts in Russia, Turkey, the Middle East, and is holding talks with Southeast Asian foreign ministers on Friday. Blinken has traveled to Japan, South Korea and Europe, and also engaged in a bout of verbal fireworks with Wang in Alaska.

Chung met Russian counterpart Sergei Lavrov in Seoul last week to discuss economic and political cooperation. They also expressed concerns over North Korea's provocations, as the country test fired two short-range ballistic missiles into the Sea of Japan on the day of their meeting.

"This visit to China means that we continue strategic communications with countries around the Korean Peninsula, following meetings with U.S. and Russian foreign ministers," the foreign ministry said in a statement. 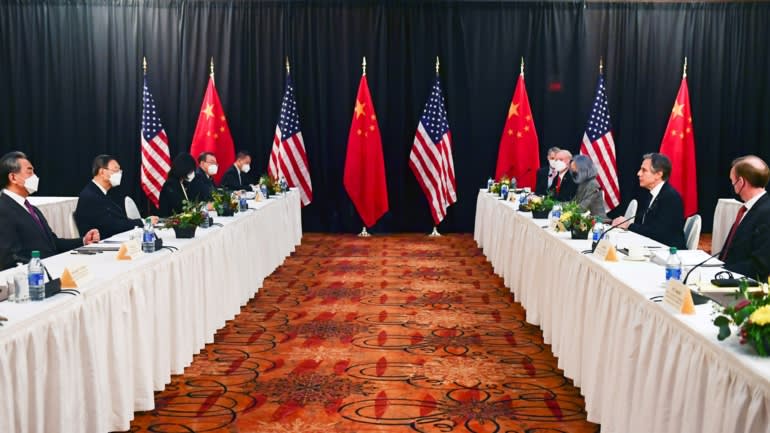 Chung's visit to China coincides with a South Korea-Japan-U.S. trilateral meeting at the Naval Academy in Annapolis, Maryland, between the national security advisers of the three countries.

"We expect the meeting to contribute to reaching a coordinated and realistic strategy on North Korea policy between the Republic of Korea and the U.S. as well as strengthening the alliance," the presidential Blue House said in press release.

The U.S. is in the final stages of its North Korea policy review and is using the meeting to consult with Japan and South Korea on the issue, a senior U.S. administration official said in a teleconference on Thursday.

While the Maryland talks will be focused on North Korea, China is also likely to feature heavily on the agenda. The U.S. official said there may be opportunities for South Korea's unofficial engagement in the Quad -- an informal grouping of the U.S., Japan, India and Australia aimed at containing China's influence in the region and beyond.

Duyeon Kim, an adjunct senior fellow with the Asia-Pacific Security Program at the Center for a New American Security, wrote in an op-ed for the Bulletin of the Atomic Scientists on Thursday that North Korea's latest missile tests have heightened security concerns in South Korea and Japan, leaving Seoul in a tricky spot.

The U.S. and South Korea reportedly made progress last year in upgrading the interoperability of America's Patriot South Korea's Terminal High Altitude Area Defense missile defense systems, but Seoul will be aware that the deployment of the system known as Thaad in 2016 sunk ties with Beijing to a new low.

"Enhancing interoperability and strengthening ballistic missile defense continues to be a long-standing challenge and a slow endeavor for the allies, especially as South Korea seeks more national security autonomy and fears backlash from China," Kim wrote.

Also complicating any co-ordinated action on North Korea is the thorny relationship between Tokyo and Seoul over the legacy of Japanese occupation of the Korean Peninsula (1910-1945) and the sovereignty of islets in the Sea of Japan.

South Korea is currently protesting the Japanese education ministry's recent approval of adjustments in high school textbooks that call South Korea's administration of the islands -- known as Takeshima in Japan and Dokdo in South Korea -- as an "illegal occupation."