ASEAN's focus on pandemic fight risks sowing discord with US JAKARTA/BEIJING -- Southeast Asian nations have cut their defense budgets to fund efforts to fight the coronavirus pandemic, leaving them with fewer resources to respond to China's increasingly aggressive territorial claims in the region.

Indonesia, home to 40% of the population of the Association of Southeast Asian Nations, has decided to lower its 2020 defense budget by 7% from the initial 131 trillion rupiah ($9.2 billion), earmarking the funds for anti-coronavirus efforts instead.

This comes as its military has deployed warships and aircraft around the Natuna Islands in the South China Sea, where Chinese coast guard vessels have been operating in Indonesia's exclusive economic zone.

China, on the other hand, is planning massive military drills in the South China Sea as early as this summer, leveraging hefty military spending that is slated to go up this year despite the first revenue decline in 44 years.

China told the Indonesian government on June 2 that it was willing to negotiate a solution to overlap between Beijing's "nine-dash line," under which it lays claim to most of the South China Sea, and Indonesia's exclusive economic zone around the Natuna archipelago. Jakarta sent back a response June 12 refusing the offer, asserting that China has no rights to the waters under international law. 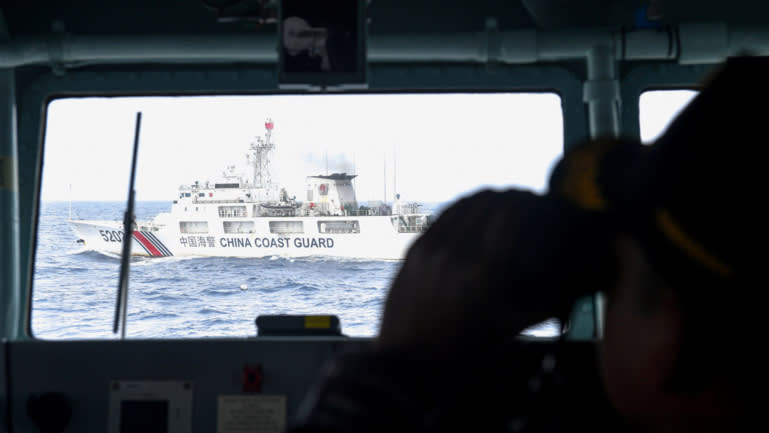 A Chinese Coast Guard ship is seen from an Indonesian Naval ship in waters north of Natuna Island in the South China Sea.   © Reuters

Southeast Asian nations have used income gleaned from their rapid economic growth to fortify their militaries amid growing alarm over Chinese incursions. Military spending in the region totaled $40.5 billion in 2019, roughly 40% higher than in 2010, according to the Stockholm International Peace Research Institute.

But most Southeast Asian countries have now made economic recovery from the pandemic a top priority. Defense spending -- which does not provide an immediate economic boost -- has become an easy target for cuts to fund more urgent measures, which risks further increasing the bloc's reliance on the U.S. as a bulwark against China.

In the Philippines, Defense Minister Delfin Lorenzana has indicated he will allow money from this year's defense budget to be used to deal with the virus. Malaysia has scaled back military spending in recent years to help mend the country's finances, and this trend is likely to accelerate as the pandemic and the drop in oil prices further cloud the fiscal outlook.

Thailand's cabinet approved in May an 8% reduction of the 233 billion baht ($7.43 billion) defense budget for the year ending September 2020.

ASEAN leaders are expected to discuss  ways to deal with Beijing with smaller military when they meet for a virtual summit this month, to be hosted by Vietnam, which is takes a hard-line stance toward China.

But the bloc's forces are a far cry from China's in both quality and quantity. Beijing announced last month a 6.6% jump in its annual military budget to a record 1.27 trillion yuan ($179 billion), even with revenue expected to drop for the first time in 44 years due to the pandemic.

ASEAN countries have little choice but to rely on the U.S., which does not look kindly on Beijing's securing of sea lanes from the South China Sea to the Indian Ocean. Yet Washington's focus on its own interests means that the ASEAN budget cutbacks could cast a shadow over cooperation between the U.S. and member countries.

Indonesia's military said Thursday that Hadi Tjahjanto, the country's top uniformed military officer, spoke on Thursday with Adm. Phil Davidson, commander of the U.S. Indo-Pacific Command, to confirm the rescheduling of joint drills that had been planned for this year. But the announcement was likely meant to send a message to China that ASEAN is in close contact with Washington. China has remained unwavering on its "core interests," such as the South China Sea and Taiwan, since President Xi Jinping said in March that the virus outbreak was basically under control.

Beijing is expected to hold large-scale military exercises as early as this summer, which some analysts say may include its first-ever deployment of two aircraft carriers, in an apparent counter to U.S. freedom of navigation operations in the area in April and May.

Vietnam's foreign ministry said Monday that a Chinese Coast Guard ship had rammed and stolen equipment and seafood from a Vietnamese fishing boat near the disputed Paracel Islands. This follows an April incident in which a Chinese vessel collided with and sank a Vietnamese boat near the islands.

Beijing has also furthered its effective control in less direct ways. The PLA Daily, the newspaper of China's People's Liberation Army, reported this month about a successful vegetable harvest on a beach in the Paracels and said later that a live-fire naval drill had been conducted around the islands.

Such moves have alarmed some in the international community. China has caught the U.S. and its neighbors off-balance while they have their hands full with responding to the coronavirus, a diplomatic insider in Beijing said.