Soybeans symbolize the costs of a US-China trade war 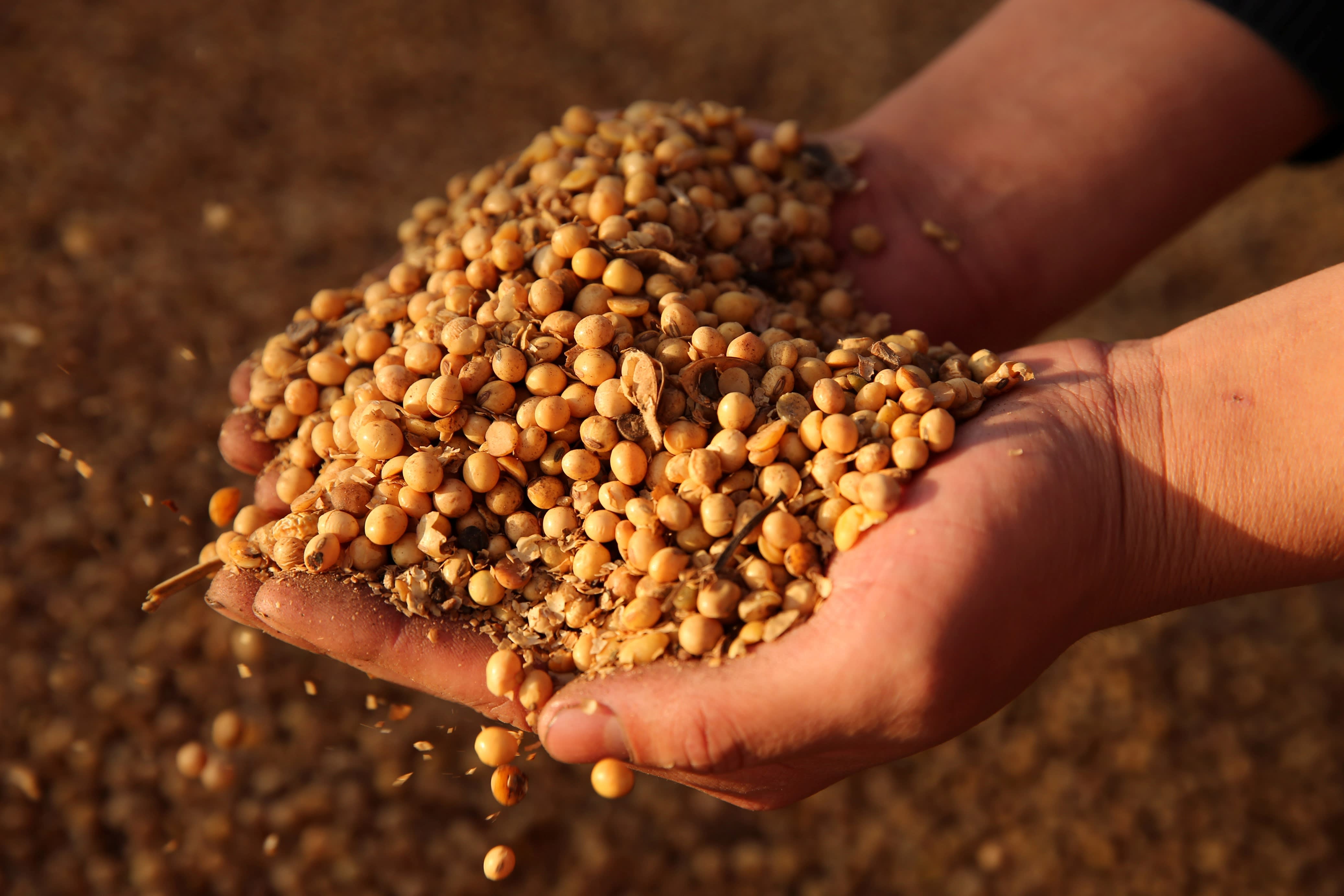 China relies on imports for about 90% of its soybeans. The government has announced a 25% tariff on U.S. soybeans in retaliation for U.S. duties on Chinese products.   © Reuters
TOMIO SHIDA, Nikkei senior staff writerApril 24, 2018 13:15 JST | China
CopyCopied

TOKYO -- When the U.S. announced on April 3 plans to impose tariffs on certain Chinese goods to punish it for alleged infringement of intellectual property rights, China quickly retaliated with duties on 106 U.S. products.

The surprise for the global commodities market is the inclusion of soybeans on the list. The question is whether, given the interdependence of the two countries in soybean trade, China can handle the pain the tariffs would impose.

There is no doubt the tariffs will sting the U.S. if they cause a slump in exports. The U.S. devotes just under half its soybean production to exports; of those, 60% go to China. U.S. soybean exports to China totaled $14.2 billion in 2016. That far outstrips Japan's global export target for all agricultural products in 2019.

Most U.S. soybeans are grown in the Midwest, the heart of Trump country. "IOM soybeans," a product traded on commodities exchanges, take their name from the first letter of Indiana, Ohio and Michigan, states that helped put Donald Trump in the White House.

The tariff increase on soybeans appears aimed at squeezing the Trump administration ahead of the midterm congressional elections in November. Worried Midwestern Republican lawmakers are urging Trump to review his sanctions on China. The administration, for its part, is exploring ways to compensate farmers hurt by the trade dispute.

But retaliating against U.S. tariff increases by raising duties on soybeans will hurt China as well. In 1996, China opened its soybean market, and since it joined the World Trade Organization in 2001, import volumes have soared. This year China will import about 100 million tons of soybeans, according to a U.S. Department of Agriculture forecast, 100 times more than when the market was first liberalized.

China relies on imports for about 90% of its annual soybean consumption of around 110 million tons. Beijing has also slapped duties on U.S. corn, but the effect should be less severe because China's domestic corn production has been rising, while soybean production has been flat since the 1990s. 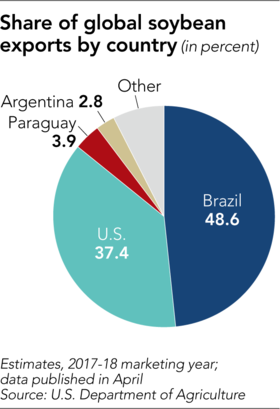 Global trade in soybeans, amounting to around 150 million tons, is dominated by two suppliers, Brazil and the U.S., which together account for 80% of the total. In 2017-18, the largest supplier of soybeans to China was Brazil, with the U.S. in the No. 2 spot at more than 30 million tons. Argentina, typically third-ranked supplier, this year suffered from a serious drought and slipped to fourth place.

China alone accounts for more than 60% of soybean imports worldwide. It will be difficult for China to manage a major shift away from U.S. soybeans. And for American farmers, the Chinese market is hugely important. "With respect to soybeans, China and the U.S. are economically interdependent," said Akio Shibata of Japan's Natural Resource Research Institute.

Millers in Chinese coastal cities such as Dalian turn U.S. soybeans into cooking oil. The byproduct, soybean meal, is turned into livestock feed. Of the total soybean volume, about 20% becomes oil, while 80% becomes soy meal.

China's meat consumption has climbed as the country has grown richer, doubling since the late '90s to about 70 million tons annually. Pork is a staple of the Chinese diet and soy meal for feed is key to satisfying demand for pork. Higher duties on soybeans will raise the cost of pork production and put upward pressure on prices. That will likely push China's consumer price index -- nicknamed the "Chinese pig index" -- higher.

A sudden price surge in pork prices would sit badly with the average Chinese. The government would probably have to consider subsidizing feedmakers and pork producers to offset the rise.

Soybeans futures on the Chicago Mercantile Exchange fell sharply when news of the Chinese tariffs broke, but prices have since recovered. Market players appear to believe the two sides will realize the cost is too high and avert an all-out trade war.

Such a conflict would wreak havoc with the soybean market. U.S. farmers will be weighing the risks as they make plans to plant their next crop in may.

The U.S. and Chinese economies, the world's two largest, are much more closely tied to each other than they were in the '90s. The travails of the soybean market offer an example of how broad import restrictions would hurt both.