Sparks fly between China and Japan over Huawei

At high-level dialogue, Beijing urges Tokyo not to wall off 5G business

Huawei was mentioned repeatedly at the meeting, which ran nearly an hour over schedule at three hours and 40 minutes.

Chinese dissatisfaction with Tokyo's stance on telecommunications security shows how treatment of fifth-generation wireless technology has become a source of friction in otherwise improving Sino-Japanese relations.

"The Chinese side was interested mainly in Huawei issues," a source at the meeting said.

A directive issued by Tokyo late last year bars telecom equipment that poses a national security risk from government procurement contracts -- a move seen as mirroring a U.S. ban on technology from Huawei and four other Chinese manufacturers. Japanese wireless carriers including market leader NTT Docomo plan not to use Huawei equipment in their 5G networks.

Kono told Wang that the Japanese government "does not have any specific Chinese company in mind" with regard to the ban. Wang seemed unconvinced, saying Docomo had done joint research with China on 5G before its pivot on Huawei.

The U.S. has pressed allies to adopt restrictions similar to those in its fiscal 2019 defense budget, which was signed into law last August and bars the federal government from purchasing telecommunications and video surveillance equipment and services from five named Chinese companies, their subsidiaries and their affiliates. 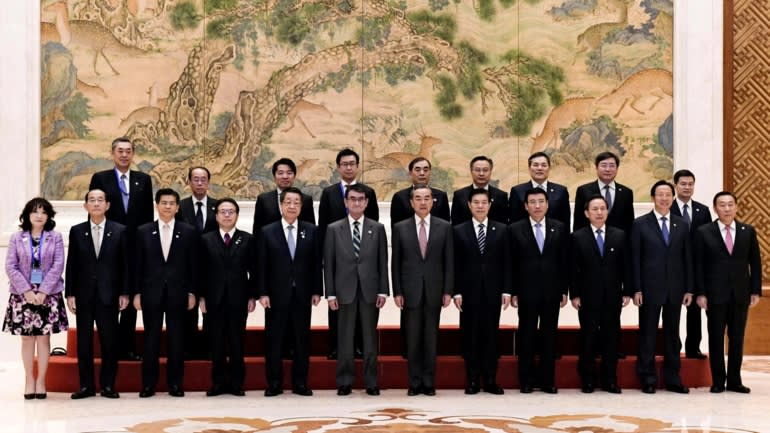 The foreign ministers of Japan and China, front row center, chaired the high-level economic dialogue in Beijing on April 14.   © Kyodo

Tokyo's directive followed in December, banning government purchases of communications circuits, devices, servers and six other types of equipment should they pose a security risk.

Japan also aims to protect telecommunications equipment in 14 areas of infrastructure, including finance and air travel, against cyberattacks and other threats.

Countries are responding differently to the risks posed by communications devices. "We do not have enough information about other countries' measures," a Japanese government source said of defenses outside the telecommunications field. Japan will begin a survey by summer to determine how such nations as the U.S., the U.K. and Australia respond to these threats.

The survey will be completed within the year, with the findings reflected in safety standards guidelines that will help critical-infrastructure providers guard against cyberattacks. The government plans to include these recommendations as part of revisions through the end of fiscal 2019.

"Security is in our DNA and the highest priority for management," a Huawei Technologies Japan spokesperson said. "Since our founding, we have never had a major security incident."

Meeting again with Wang on Monday, Kono reiterated Japan's desire that Chinese President Xi Jinping attend the Group of 20 summit in Osaka this June. The last Chinese president to visit Japan was Hu Jintao back in 2010.

"Xi is expected to attend," Kono told reporters after the meeting.

Kono told Wang that he hoped both the foreign minister and State Councilor Yang Jiechi, China's top diplomats, would visit Japan before the G-20 summit.

Before meeting with Wang, Kono met with Chinese Premier Li Keqiang, who said the exchange of official visits with Prime Minister Shinzo Abe last year had put Sino-Japanese relations back on the right track.

He said it is important for the two countries to engage in "concrete" cooperation and expressed hope for collaboration on infrastructure development abroad based on China's Belt and Road infrastructure-building initiative.

"Japan-China relations have normalized," Kono told Li. "Although there are many problems facing Japan and China, I want to work side by side to tackle global issues going forward."