Rajapaksa plans to make his case to the United Nations Human Rights Council which is holding sessions in Geneva from late February, running the risk of raising the ire of the European Union, a major trading partner of the South Asian nation.

The new government, formed in November, wants to roll back commitments made by the previous Sri Lankan administration in an October 2015 resolution at the U.N. Human Rights Council to heal the wounds of the 30-year civil war through "transitional justice."

Those obligations include the setting up of an office for missing persons and establishing legal mechanisms to investigate alleged war crimes as part of "promoting reconciliation, accountability and human rights."

The Rajapaksa government now wants the Office of Missing Persons to shutter operations and has also revealed plans to seek parliamentary approval for a new law to grant immunity to Sri Lankan soldiers who had allegedly committed war crimes during the conflict. A Sri Lankan woman holds up a poster of a family member who disappeared during the civil war at a silent protest to commemorate the missing in Colombo, in August 2016.   © Reuters

The issue was brought into focus this week when Rajapaksa made a rare admission, during a meeting with U.N. Resident Coordinator Hanaa Singer in Colombo, that the people missing for over a decade since the war ended were in fact dead. A government-appointed commission in 2013 put the number at 23,586 people. His admission marked a major shift as Sri Lanka had in the past denied that the thousands who had been reported missing were dead.

"President Rajapaksa outlined his plans to address the issue of missing persons," according to a statement released after the president met with Singer. "He explained that these missing persons are actually dead."

The civil war ended in May 2009 after over 100,000 people were killed as government troops fought the separatist Tamil Tigers, who were also alleged to have committed war crimes.

Referring to Rajapaksa's move, Sri Lankan human rights lawyer Sudarshana Gunawardana said: "These are the first steps to dismantling the transitional justice architecture. It is also sending a message that they [the Rajapaksa government] are going to break from the past." 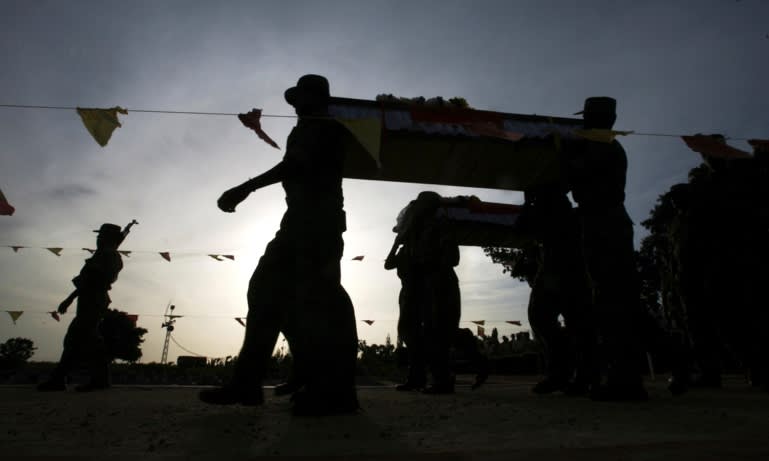 Sri Lankan Tamil Tigers carry the coffins of dead colleagues killed in a claymore bomb explosion at their northern stronghold of Kilinochchi in July 2007.   © Reuters

But in a terse tweet this week, the EU reminded Colombo that breaking away from human rights commitments would cost the country economically. Sri Lankan exporters benefit hugely from the preferential trade access to the EU through the Generalized Scheme of Preferences, or GSP+, arrangement.

"GSP+ is not automatic," the EU tweeted. "It is granted only if there is continued and effective implementation of 27 international conventions, related to human and labor rights, environment and good governance. The EU monitors this implementation closely."

The tweets came after Prasanna Ranatunga, industrial export and investment promotion minister, said last weekend that the EU has "assured Sri Lanka it will continue with the GSP+ tax concessions until 2023."

Diplomatic sources in Colombo said that the Rajapaksa government must take the EU seriously. "The government's spin is not going to get them far, and getting a break at the council may not be easy," said a Western diplomat.

The EU reinstated its GSP+ trade preferences with Sri Lanka in 2017 and the impact was immediately felt. By 2018, the island's total export value rose to a record $17 billion, with nearly a third of foreign exchange earnings from the EU market. A family member of a soldier who died in the civil war cries in front of the wall with war heroes names at the war memorial, during a commemoration ceremony to mark the 10th anniversary of the end of the armed conflict between Tamil Tigers and government troops, in Colombo, May 2019.   © Reuters

The EU had blacklisted Sri Lanka and frozen GSP trade preferences in 2010, due to the country's dismal human rights record under the regime of former President Mahinda Rajapaksa, Gotabaya's elder brother. That regime struck a combative note at the U.N. Human Rights Council and objected to pressure by Western governments to build in postwar accountability mechanisms.

The U.N. had said that Sri Lanka had the worst record for missing persons after Iraq. Tens of thousands of people disappeared during bloody clashes triggered by a Marxist group and its ultranationalist allies, most belonging to the island's Sinhala-Buddhist majority in the south, between 1987 and 1990.

The war in the north and the east was fought on ethnic lines, with the Tamil Tigers waging a battle for a separate state of Tamil Eelam. In August 2013, a government-appointed commission received 23,586 reports of people who had disappeared during the war. The numbers also included the names of some 5,000 government troops who were unaccounted for.

Rajapaksa was one of the architects of the military's victory over the Tamil Tigers, as defense secretary to his brother Mahinda then. Not surprisingly, his admission that the people reported missing were actually dead prompted troubling questions.

"He must explain how they died since he seems to know that they are dead," said Mathiaparanan Sumanthiran, a member of parliament for the Tamil National Alliance, an opposition party. Another TNA parliamentarian disputed Rajapaksa's statement, saying that most of the missing surrendered to the military in the final stages of the war.