COLOMBO -- The front gate of southern Sri Lanka's Hambantota port was uncharacteristically deserted. Over the course of nearly an hour one mid-February afternoon, only a few vehicles passed by a lonely teahouse by the entrance.

"Around this time, there were always 10 to 15 people having tea here," lamented Wilson, the teahouse owner. "But nobody comes since last December, when the government sold this port to China."

The teahouse opened two years before Sri Lanka, formerly Ceylon, achieved independence as an autonomous territory of the British Commonwealth. "My father started this tea shop in 1946, but we have to sell this [site] as the government plans to sell these lands to China, too," he said.

The port, built with Chinese money under former President Mahinda Rajapaksa, has a low operation rate and is increasingly seen as a white elephant. Local residents say even less cargo has been coming through since state-controlled China Merchants Port Holdings began managing the facility in December under a 99-year lease, and raised container-handling fees.

What is China's goal? Is it looking to turn Hambantota into another overseas naval base, after it opened its first in the East African country of Djibouti last summer?

When a Nikkei reporter showed up at the port's management office seeking an interview, a receptionist holding a list of Chinese names placed a call, only to have the request rejected in 10 seconds flat. A superior quickly appeared, demanding to know how the journalist got past the front gate.

"If any local people, or even Rajapaksa, come here, they will not be allowed to come inside," the superior said.

India is watching warily. "We continue to take up with Sri Lanka issues related to the security concerns in the region, and expect that our Sri Lankan friends will keep in mind our security concerns and sensitivities," said Raveesh Kumar, a spokesman for India's Ministry of External Affairs.

But Sri Lanka's mounting debt gives China nearly free rein, and has allowed the Chinese to assert virtual extraterritorial rights over the port. 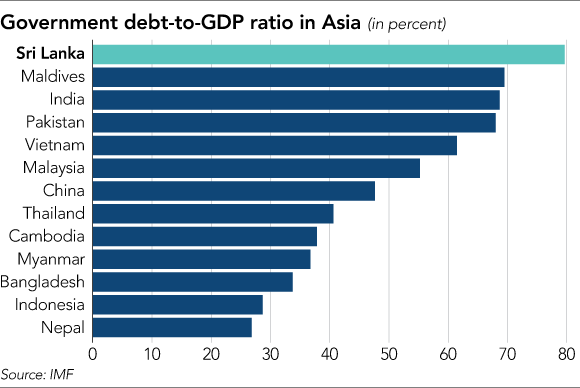 Sri Lanka's government debt is equivalent to 81.6% of its gross domestic product, according to an International Monetary Fund report released in January. External debt, including that incurred by private sectors, stood at $48.3 billion as of the end of 2017 -- or 58.2% of GDP.

The island country is believed to owe $8 billion to China.

When they took office in 2015, President Maithripala Sirisena and Prime Minister Ranil Wickremesinghe inherited a mountain of debt from the pro-China Rajapaksa. The following year, Sri Lanka received $1.5 billion in financial aid from the IMF under the Extended Fund Facility and started a three-year fiscal reform program.

With the government attempting to maintain fiscal discipline amid a revenue shortage, the program appears to have only strengthened China's hand.

"There was no way other than selling the port of Hambantota to China for $1.1 billion," said a senior official at an economy-related ministry, lamenting insufficient budgets. "We needed to raise funds from somewhere. And there was no country or institution with ready cash other than China."

Even the IMF lined up behind the port deal, in the context of fiscal reform. "Staff welcomed the efforts to improve debt management, including [legislation that will allow the government to] earmark proceeds from commercialization of public assets (e.g. the Hambantota port) for future debt service," the fund said in its report.

There is also talk of selling Mattala Rajapaksa International Airport, another white elephant created by the former president, because the government still has the heavy debt burden. "The government faces higher debt repayments starting from 2018," the IMF said, noting that "preparation is needed as the next sovereign bond repayment of $1.5 billion falls due in 2019."

An airport official said India was interested in the airport and sent a delegation last year, but that the negotiations were difficult. "I heard that it was not going well due to a mismatch in conditions from both sides," he said.

If China were to buy the airport, it would surely spark concern about the facility becoming an air force base. 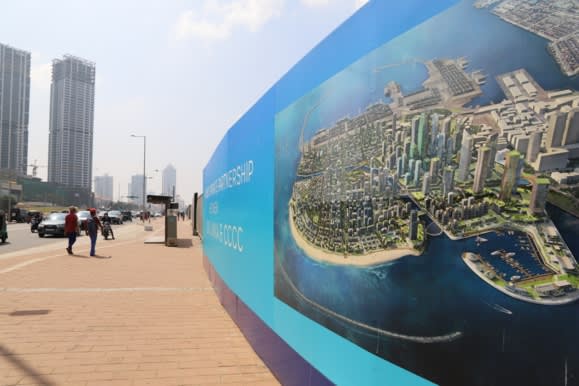 China is backing a land reclamation and development project along the coast of Colombo, Sri Lanka's largest city. (Photo by Yuji Kuronuma)

Public opinion, meanwhile, could push Sri Lanka even deeper into China's embrace. "This government has done nothing," complained Pradeep, a taxi driver in the southern city of Galle. The government's hands are tied financially, but ordinary citizens do not always see that. "Rajapaksa left visible development such as ports, the airport and highways," the driver said.

Support for the former president is spreading among the educated. The official from the economy-related ministry, for instance, said the Port City reclamation project Rajapaksa started in Colombo "will help in upgrading our tourist industry."

The project is estimated to cost $15 billion. Around the clock, China Communications Construction is reclaiming the coastline of the country's largest city. "It will help us change from a destination for budget tourism to high-end tourism," the official said.

If powers like India, the U.S. and Japan want to stop Sri Lanka from drawing ever closer to China, what can they do? Cover all of the debt to China? Back big-ticket infrastructure projects without paying heed to fiscal discipline? These regional players may find themselves forced to take drastic measures.