Trip by No. 2 diplomat aimed at easing tension as New Delhi vies with Beijing KATHMANDU -- Indian Foreign Secretary Harsh Vardhan Shringla, the No. 2 official at the Foreign Ministry, will visit Nepal in late November, amid signs New Delhi is keen to turn the page on the acrimonious relations it has had with its northern neighbor over the past year.

Shringla's trip will take place more than a year after Subrahmanyam Jaishankar, India's foreign minister, last visited the country for bilateral talks. Shringla's two-day trip will cap a series of high-profile visits by Indian officials in recent months and is seen by many as New Delhi's attempt to mend fences with Kathmandu.

India's rapprochement with Nepal takes place against a backdrop of Kathmandu's tilt toward Beijing and growing Chinese influence in the Himalayan country. India, a powerful neighbor with immense leverage over landlocked Nepal, is concerned about losing its position. Meanwhile, Chinese Defense Minister Wei Fenghe will reportedly call on Nepal this month. 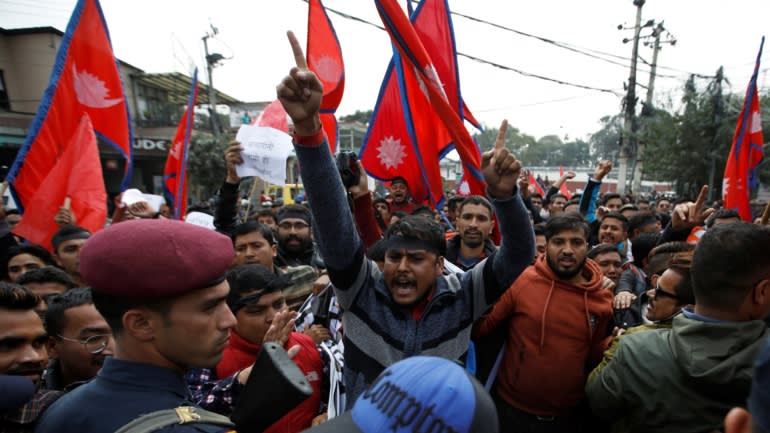 Nepalese students the protest the publication of a new map of India near the Indian Embassy in Kathmandu on Nov. 8.   © Reuters

Putting those differences aside, officials from the two countries are now trying to make up. Shringla's visit is expected to pave the way for a ministerial-level meeting.

Nepal's Foreign Minister Pradeep Gyawali told Nikkei Asia the two sides will discuss a range of issues, including the border dispute. "We will discuss all issues on our bilateral relations. Because this is the first bilateral meeting [in] a year, we will not just focus on the border issue," Gyawali said.

New Delhi had previously refused talks, saying the COVID-19 pandemic prevented it, but it eventually relented. "The Indian side's desire to sit for bilateral talks post-COVID pandemic was a misplaced one from the beginning as all stakeholders were aware that this was going to be a long-drawn struggle against the virus," said Akanshya Shah, a New Delhi-based Nepalese researcher.

"A realization seems to have seeped into the power corridors of India that its relations with Nepal cannot be left unattended, even as it initially called the adoption of the new map by Nepal a 'cartographic manipulation,'" she added. Nepal and India share an 1,800 km open border and have several mechanisms to deal with bilateral issues. The fifth meeting of the India-Nepal Joint Commission, headed by the countries' foreign ministers, met in Kathmandu in August 2019. Gyawali said the commission's sixth meeting was expected to be held in New Delhi.

While Gyawali was cagey about the agenda for Shringla's meeting with his Nepalese counterpart, Shah said the talks may be vital for easing tensions and mistrust. "Bilateral dialogues may not necessarily lead to immediate resolution of the border disputes ... India may offer some compromise," she said.

India is not the only neighbor with which Nepal is embroiled in border disputes.

The months-old allegation of a Chinese incursion into Nepal's northwestern Humla district refuses to fade away, despite both countries denying it. Nepal's main opposition, the Nepali Congress party, continues to demand an investigation into the matter. Gyawali, however, told Nikkei that an interministerial panel had settled the issue five years ago, after it submitted a report to the coalition government backed by the Nepali Congress, then the ruling party.

"The panel concluded that China hadn't encroached upon our territory," he said. "I wonder why the Nepali Congress is raising the issue of encroachment, which had been already been settled. This issue should not be politicized."

While military tensions continue between India and China near Ladakh, to Nepal's west, forcing Kathmandu to walk a tightrope between its giant neighbors, some geopolitical observers see a big power contest being played out in the strategically important Himalayan nation.

"Nepal matters because of the broader security implications of the tension. India suffered a setback in Ladakh," said Pramod Jaiswal, research director at the Nepal Institute for International Cooperation and Engagement in Kathmandu. "There's a feeling within the Indian establishment that China is trying to encircle it in South Asia."

As India and China compete for influence, Nepal will remain very important geopolitically, according to Shah, a former associate fellow at the Observer Research Foundation, an Indian think tank. "The present government [in Kathmandu] seems to be tilted in favor of its northern neighbor, with China now influencing Nepali domestic politics directly. It's not a matter of whether Nepal can balance between the two, but it is a foreign policy compulsion for a landlocked country to maintain equidistance between its two most powerful giant neighbors," she said.

It appears Gyawali would concur. Nepal's Foreign Minister Pradeep Gyawali, left, greets his Chinese counterpart, Wang Yi as he arrives for a meeting at the Great Hall of the People in Beijing in July 2019.   © Reuters

"It's in Nepal's national interest to be close with both countries so that we can take advantage of their rapid economic growth and progress. Our trade volume with India is huge, and it's easier to transport with the country," Gyawali said.

"Though geography has made connectivity with China difficult, we aim to build it. We are focused on this because it's the only way for a landlocked country like ours," he added.