WASHINGTON -- Japanese Prime Minister Yoshihide Suga kicked off his meetings in Washington on Friday by meeting U.S. Vice President Kamala Harris, promising to assist in tackling the root cause of mass migration to America's southern border, a topic Harris has been tasked with.

Suga and Harris discussed the flow of immigrants into the U.S. from Central American countries, a Japanese government readout said after the meeting. Suga said Japan would like to work with the U.S. on addressing the root causes of migration, such as poverty, public security and natural disasters.

Harris agreed and praised Japan's contribution to the migration issue, according to the readout.

U.S. President Joe Biden recently gave the issue to Harris -- her first major policy assignment in the White House -- and Suga's offer to help in improving the quality of life in the "Northern Triangle" countries of Guatemala, El Salvador and Honduras reflects Tokyo's desire to build a relationship with the new vice president.

Suga met Harris at the Eisenhower Executive Office Building, a short ride across the street from the Blair House, where the prime minister is staying.

"The president and I are very excited about the conversations we will have," Harris told Suga, as they stood in front of flags of both countries.

Touching on the first leaders meeting of the Quadrilateral Security Dialogue, Harris said, "You and I met just about a month ago during the Quad summit which was a meeting with the United States with our allies Japan, with Australia and with India, where we had extensive conversations about the collaborations and the friendship around some of the biggest challenges facing our world."

Harris added that it was a "personal point of privilege" to meet Suga, coming from a state with a large Japanese community, California. 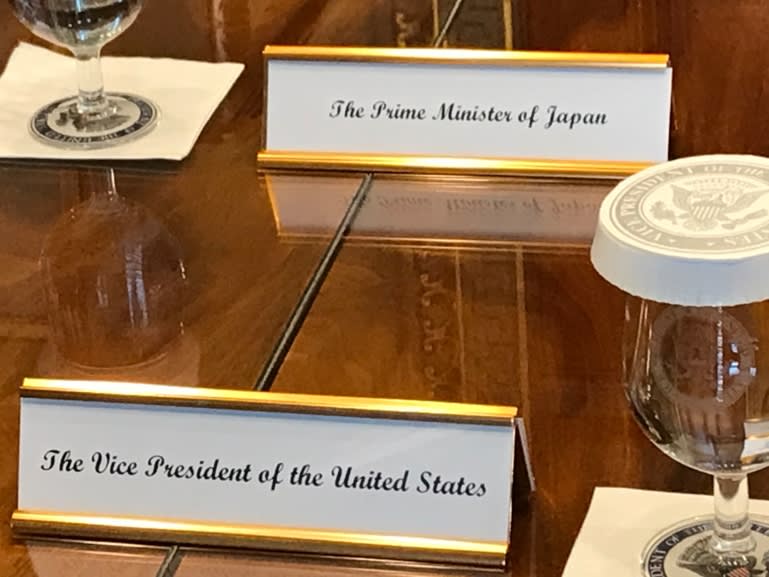 Name plates are seen ahead of Yoshihide Suga's meeting with Kamala Harris at the Eisenhower Executive Office Building on April 16.

Suga expressed his "sincere gratitude" for the White House invite and praised the Biden's administration's commitment to bilateral relations.

"Japan highly praises and appreciates that the Biden-Harris administration puts high importance on cooperating with its allies and partners," Suga said.

"The Japan-U.S. alliance is bound by universal values such as freedom, democracy and the rule of law. There has never been a more important time for the alliance to be strong."

He said he looks forward to discussing with Harris, and later President Joe Biden, "a wide range of challenges that both Japan and the United States face and reconfirm the bond of our alliance."

Harris then took Suga to the balcony outside her office, which overlooks the West Wing of the White House.

Suga will meet Biden in the early afternoon and hold a joint news conference in the Rose Garden later.

In the morning, Suga had breakfast with former U.S. Ambassador to Japan Caroline Kennedy, with whom he had monthly dinners when she was posted in Tokyo.

He then visited Arlington National Cemetery where he laid a wreath at the Tomb of the Unknown Soldier.