TOKYO -- Military strikes against chemical weapons facilities in Syria launched by the U.S., U.K. and France on Friday drew mixed responses from Asian governments, while many experts see the attacks complicating talks on North Korean denuclearization.

Japanese Prime Minister Shinzo Abe told reporters that the Japanese government would "support the determination of the U.S., U.K. and France [to ensure] that the proliferation and use of chemical weapons will never be allowed."

He also expressed an intention to discuss the situation in Syria and the Middle East with U.S. President Donald Trump when the two meet in Florida on Tuesday and Wednesday. "The threats of nuclear, biological and chemical weapons are becoming greater in East Asia."

Malcolm Turnbull, Prime Minister of Australia -- a staunch ally of the U.S. -- also threw his support behind the measures. The strikes "send an unequivocal message to the Assad regime and its backers, Russia and Iran, that the use of chemical weapons will not be tolerated," he said in a joint statement with the foreign and defense ministers.

Beijing, on the other hand, criticized the strikes, claiming they were a violation of the principles of international law and were carried out without a thorough investigation into the alleged use of chemical weapons against Syrian civilians.

"Unilateral military action bypassing the Security Council runs contrary to the purpose and principles of the UN Charter," Ministry of Foreign Affairs spokeswoman Hua Chunying said at a news conference. "Regarding the suspected chemical weapons attack in Syria, a comprehensive, impartial and objective investigation should be carried out."

Indonesia, the world's largest Muslim country, maintained a neutral stance. The government of the biggest economy in Southeast Asia "expressed strong condemnation of the use of chemical weapons in Syria by any party," the country's Ministry of Foreign Affairs said in a statement on Saturday. "Indonesia also asks all parties to maintain the security and safety of civil society, especially women and children," it added. 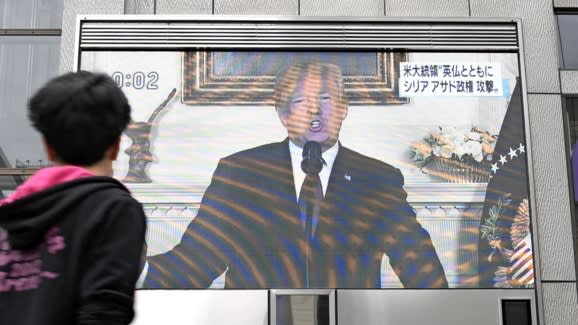 Trump announced late on Friday that he had ordered precision strikes targeting the chemical weapons capabilities of Syrian President Bashar al-Assad's regime. France and the U.K. joined the U.S. in a coordinated operation that targeted three related facilities.

"The purpose of our actions tonight is to establish a strong deterrent against the production, spread and use of chemical weapons," Trump said in a televised address from the White House. Later on Saturday, he took to twitter to tout the "perfectly executed strike" and declare, "Mission Accomplished!"

Defense Secretary James Mattis said the strikes would be a one-off operation.

Many observers have already turned their attention to the potential ripple effect on the situation regarding North Korea. Trump is expected to meet with North Korean leader Kim Jong Un in May or early June.

"The attack may pressure North Korea as the U.S. showed it can use military options but it was limited to missile bombardments," said Shin Beom-chul, senior researcher at the Asan Institute for Policy Studies in Seoul.

"The decision ahead of the North Korea-U.S. summit will boost Washington's negotiating power, but its influence will be limited."

Earlier this month, Nikkei reported that Kim had told Chinese President Xi Jinping he was willing to rejoin "six-party talks" to discuss denuclearization. Such a framework, however, could be marred if U.S. relations with Russia, one of the six members, deteriorate. A United Nations report found that North Korea had provided the Assad regime with materials that could be used to make chemical weapons.   © Yonhap/Kyodo

The airstrikes were met with a backlash from Russian President Vladimir Putin, who called for an emergency meeting of the United Nations Security Council to discuss "aggressive actions of the U.S. and its allies."

"The current escalation of the situation around Syria has a devastating impact on the whole system of international relations," Putin said in a statement.

"The international community, including Russia, is concerned about the situation," he told reporters on Saturday, adding that Tokyo would analyze what kind of impact deteriorating relations between the two could have on the situation in North Korea, according to Kyodo News.

Ryo Sahashi, an associate professor of international politics at Kanagawa University, said the strikes "raised North Korea's determination to deliver successful negotiations" with the U.S. and others, but their impact on the six-party talks would be limited. "Whether or not to open six-party talks, a broader platform to discuss security issues in the region, will be up to the U.S. and China."

Pyongyang may also come under scrutiny from the international community due to its suspected connection to Syria's chemical weapons program.

Many U.S. lawmakers have been alarmed by a United Nations report in February, which found that North Korea had provided the Assad regime supplies that could be used to manufacture chemical weapons at least 40 times between 2012 and 2017.

In a letter dated April 12, U.S. Senators expressed "deep concern" over the report, which "exposes North Korean sanctions evasion involving Russia and China," and urged the Trump administration to enact "a swift and appropriate response to the continued use of chemical weapons" by Assad's government.